here some updates to the active short trades.  any active shorts not listed here still look fine technically but feel free to email me if you have any specific questions on a trade. remember, all posts/charts on any of these trades can be quickly reference by clicking on the blue ticker symbols at the bottom of the post.

AZO- one of several recent “fake-downs” or false breakdowns caused by the recent volume-less rally.  still well within the rounding top pattern though and still looks good.  consider a stop around 372 as there is decent horizontal resistance around the 371.50 level.

FCH-  snapped back up into the rising wedge shortly after entry but has since broken below again and still looks good. T2 is preferred target

FDO- still profitable, still looks good.  FDO has broken below S1 (which is now resistance) and today is the 3rd straight session is has retested that level from below.  T1 on daily chart remains first target but this one will very likely be extended to the weekly swing target if the market rolls over soon.

FL- trading just below entry & still looks very good. even more so now than when first posted a week ago since i had a failed wedge over-shoot on friday following up with a bearish candlestick today

GCO- this one’s a coin-toss.  it did trade 2 pts above the original suggested stop level, which was above 67.25 but i’ve also decided to loosen up on my stops since the original post.  therefore, for anyone else using liberal stops, i will continue to update this one for now and leave it as an active trade with a new stop 1/4 pt above friday’s high of 69.27 (new stop 69.52).

GLD- has been a active short trade for most of the year.  still profitable & still looks good longer-term.  basically, GLD has danced around T1 support ever since hitting it not long after the short entry.  as this trade was based off the weekly chart, it will take time to play out or be removed if & when the technical picture changes.  for now, GLD continues to ride up the underside of the primary weekly uptrend channel and T2 remains my preferred target for now.  i plan to do an more comprehensive update to gold & silver soon but nothing much has changed since my last few posts.

IBKR- although not officially removed or stopped out, my last update stated that IBKR had fallen to critical support and that a bounce was likely.  i suggested taking profits there at 13.01 which was the exact low for the stock.  it did experience a bounce from there and has been struggling with it’s downtrend line since then.  if still short, keep an eye out for a solid break above that downtrend line as IBKR also put in some strong divergences on the recent low.  otherwise, as i also suggested in my last update, a new short entry would be triggered on a break below that critical support level (13 area).  see chart below.

IMGN- moved back up inside of wedge but still looks fine.

IYR- this one’s been on as a short for a while; hit T1 then moved just slightly above the originally suggested tight stop area but as i’ve loosen up most stops since then, i am still short this one (via DRN) and believe that  it still looks good.  see updated chart below.

JJC-  been on for a while but still looks ok.

MA- still riding up the bottom of that long-term channel but still looks good for a longer-term short but needs to break below the channel for a new entry or add-on.

MNTG-  hit first two targets and reversed just shy of T3 (final target) and has been consolidating around T2 while it works off the oversold conditions.  T3 still favored target.  stops depend on your entry.

ROST- one of several recent “fake-downs”.  back inside wedge now but still looks fine, even as a 2nd entry/scale-in lot at current levels.

SOCL- still an active short, still looks good as a long-term swing short as a play on the popping of the dot.com bubble part 2.  stops & targets TBD.

TJX- another recent fake-down to trigger an entry but still looks good and will likely start moving lower soon.

WFM- another entry recently triggered on a fake-down.  moved back inside of bearish rising wedge but still looks fine.

XLF- slightly above top of resistance zone it was recently shorted at but still an active short.  consider stops not far above. 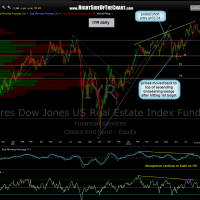 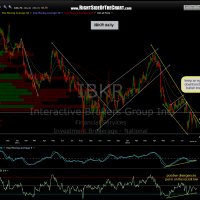