QQQ, SPY & XLK (tech sector ETF) have all made impulsive gaps above the highlighted price & downtrend line resistance levels from yesterday’s videos which is clearly bullish as long as they remain above those key former resistance, now support levels.  QQQ made an impulsive gap/breakout above the TL off the Sept 19th high without much resistance until the larger TL off the July 26th high. The RSI divergence has been taken out with a higher high while the potential (but unconfirmed) PPO divergence is still (barely) intact. 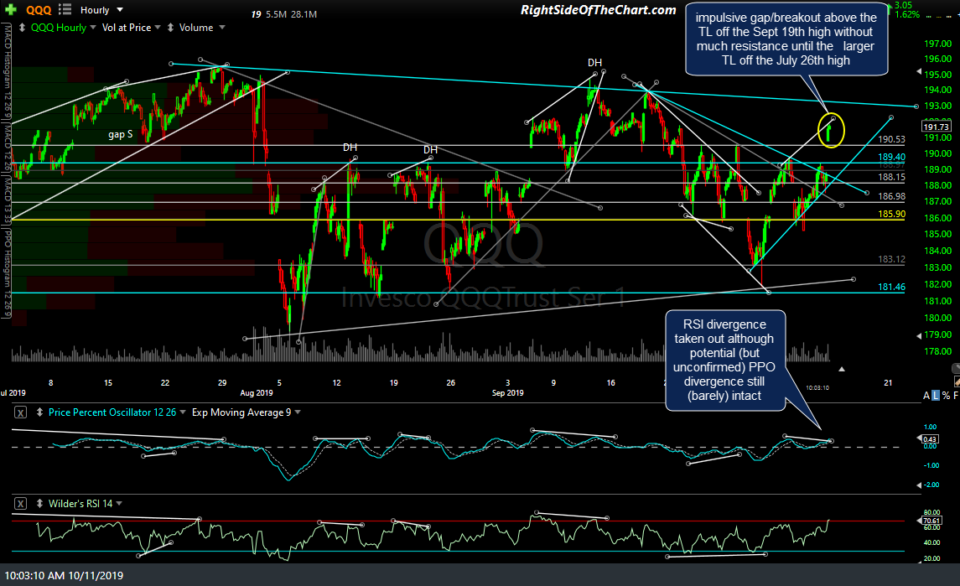 We also had an impulsive gap/breakout above the key 294 level in SPY which has now rallied into the 297.86 R level. As with QQQ, the potential (unconfirmed) PPO divergences are still hanging on by a thread as the RSI divergence has been negated with a higher high.

We also had an impulsive gap/breakout above the downtrend line highlighted in yesterday’s video with XLK now trading at the more significant downtrend line off the July 24th highs. The test of that downtrend line below also correlates to a backtest of the primary uptrend line off the December 24th low on the XLK daily chart. As such, an impulsive rejection off these trendlines would be worth noting as that has the potential to confirm the divergences on the PPO of XLK (as well as those on SPY & QQQ). Basically, if today’s breakouts on the 60-minute charts are going to prove to be whipsaw signals, this would be an ideal spot for the reversal to start. However, until & unless that occurs (i.e.- a move back down below SPY 294 &  QQQ 198.40), today’s breakouts can be construed as anything but near-term bullish.

/NQ is also still above the minor uptrend line following the breakout aboe the  while testing the 7885 resistance level now with the PPO divergence still barely intact for now, just as with /ES, SPY, QQQ, & XLK.  So essentially, today’s breakouts are near-term bullish until & unless faded with the indexes falling back below the recent breakout levels.

As of now, today’s breakouts are solidly intact & with the indexes comfortably above the key resistance level/breakout points. Today also has the early makings of a trend day although if this market has taught us anything in recent months, it’s that it loves to pull very sharp & sudden reversals and it been plagued with false breakouts in both directions (bullish & bearish). As such, for active traders looking to position short if we get those sell signals with both /ES & /NQ breaking down below those yellow uptrend lines on the 60m charts, my initial (and quite possibly… Read more »

According to GAHN CHARTS this October came out the most bullish month(21 year) and it is great possibility that SPX 3125 & Nasdaq 8225. Then the shorting opportunity will come. The upside top may come during OCT & then the adjustment. That’s how i have seen the charts please trade at your own will & my opinion is my thought only, no advice and also no suggestion. Good Luck.