A couple of points to address on the agricultural commodities. Regarding the recent official trades in the ag commodity sector, both NIB & WEAT have exceeded their max. suggested stops & will be moved to the Completed Trades categories.

WEAT (Wheat ETN) was recent added back as an new long swing trade after the previous swing trade on WEAT hit the final swing trade target for a relatively quick (6 week) 10% gain & reversed form that resistance level to nearly the penny (first chart below). As that previous swing trade hit the final target (T3), that trade was closed with all targets being hit. At the same time that previous WEAT Swing Trade was added as an Active Trade back on Jan 3rd, it was also a Long-term Trade with a final target finalized to be T4 at 8.44 in a follow-up posted shortly afterwards. Also at that time, the suggested stop on that Long-term Trade in WEAT was raised to any weekly close below 6.90. WEAT printed a weekly close of 6.88 on Friday April 7th, which provided an essential breakeven (2 cent loss) on that Long-term Trade. 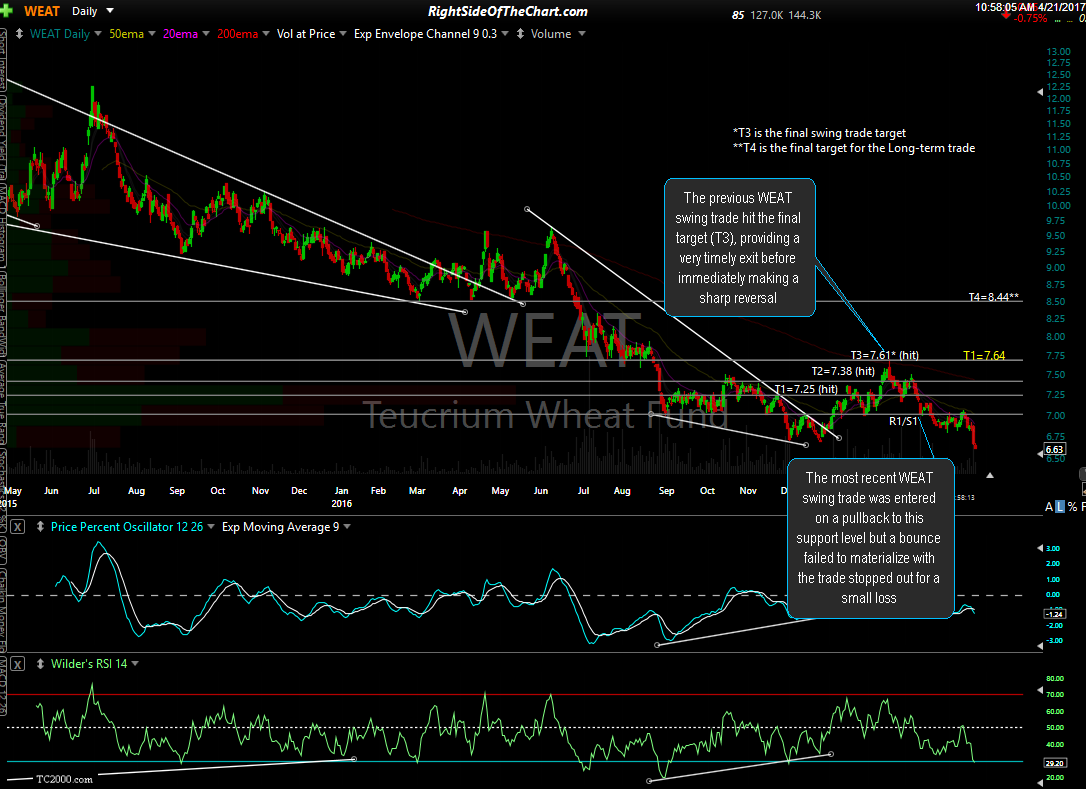 The most recent Swing Trade on WEAT entered on a pullback to support at 7.03 on March 14th failed to reach its sole price target & went on to hit the suggested stop of 6.79 yesterday for a relatively small loss of 3.4%. As such, WEAT will now be re-assigned to the Completed Trades category where all associated posts will be archived indefinitely for future reference.

The recent NIB (Cocoa ETN) swing trade which as entered on March 13th at 24.75 immediately moved sharply higher, hitting both the first & then the second target, T2 at 26.50, for a quick 7% profit. After struggling with the T2 resistance level for a few days, NIB reversed & went on to exceed the suggested stop of 23.59 on April 13th, resulting in a loss of 4.7% for those that did not already book partial or full profits at T1 or T2 (note. The percentage gains & losses do not account for the lowered beta-adjustment of 0.80). FWIW, NIB could be setting up for a major reversal as there are current strong potential (but still unconfirmed) positive divergences forming as NIB made a new low yesterday followed by a fairly sharp reversal today so far. As such, NIB is on watch for another possible long entry.

Finally, one point to address was this comment from a member in the trading room early today:

seriously, why are you playing these agriculture commodities? look at any one of these weat,jo, jjg, etc. there is a big drawdown effect over time. compare the continuous contract to what your playing. look at JO for example vs the continuous contract of coffee over time….sure easy exposure with ETN’s like JO….but right from the start your down…lol. don’t be a fool. I see that someone mentioned that they’re in it for the long term w/ these ETN commodities….wake up!

First of all, I opt to use the commodity trading ETNs in lieu of futures contracts for the official trade ideas on the site, even if I’m personally trading the latter. The reasoning being that is due to the fact that the majority of retail traders, especially those relatively new to investing or swing trading, do not have a ability nor the experience & knowledge to trade futures. While I do very much agree with the fact that over time, the commodity tracking ETNs will typically underperform the returns of the underlying commodity due to expenses associated with trading & rolling futures contracts in addition to the typical expenses incurred by all exchange traded products, I’ve found that most commodity tracking ETNs still provide a very efficient & effective means of profiting from short & intermediate-term trends (i.e.- swing trading) and even longer-term trades, given the right technical setup, such as the Long-term Trade in which we were able to successfully capture over 64% of a roughly 104% bull run in coffee prices using the coffee ETN, JO (see charts below). Not only did that trade work out for some very attractive gains but if you compare the gains between JO & $COFFEE (continuous contract prices) from the bottom to the top of that late 2013-early 2014 rip that we caught the bulk of, you’ll see that JO essentially produced the same return as did $COFFEE. I will say that the ETNs, just as with the leveraged sector ETFs, tend to track the underlying commodity (or sector) much better during mostly uni-directional trends, i.e- trends with very few counter-trend closes. (note, the last chart below showing the JO trade closed out points out the 45% gain on the swing trade that was entered on the downtrend line, not the alternative, aggressive entry on the long-term trade back on Nov 6. 2013 which was good for a 64.2% gain).

On a related note, I recently came across this article from the Wall Street Journal: Plowed Under- U.S. Farmers, Who Once Fed the World, Are Overtaken by New Powers: Bumper soybean and wheat harvests in Brazil and Russia push down global prices, imperiling America’s growers; ‘hard for our psyche’. The full article is only available to WSJ subscribers but the gist of the article talks about a dramatic shift from the U.S.’s former title of “the world’s bread basket”, yielding that historical title to countries with more arable land & favorable climates such as Brazil & Russia. The article explains why certain commodities such as soybeans & wheat have faces steep declines in recent years with a increasing supplies coming from outside the U.S.

Randy….you still cant convince me. if you look at the returns over time on a percentage basis your at a big loss. ok you might catch the trend here and there but for me I want an equal playing field. example…..I would rather be trading XOP, XES or XLE for crude oil than playing USO. the stock ETF’s have very low expense and drawdown is nil. when someone new comes on this site please stress this point that you not on an equal playing field. I feel like I am on a football team playing against an equal opponent in… Read more »