The following video is a comprehensive look at the near-term, intermediate-term & longer-term outlook for the US Dollar. Although I don’t actively trade currencies, I do follow the US Dollar, as well as the Euro & the Yen, very closely to get a better idea of where dollar sensitive assets such as gold and select commodities are likely headed.

Although the video discusses the outlook for the US Dollar, Euro & Yen in more detail, in summary, the $USD, Euro & Yen all broke above/reversed off the resistance levels & chart patterns that we discussed in the Jan 29th Market Overview video (currency coverage starting at the 11:30 mark). The breakouts/reversal from those chart patterns & levels in the major currencies sparked the sharp selloff in the $US Dollar which in turn, caused gold prices (along with GDX) to spike.

Following the recent breakout above the triangle pattern discussed in the Jan 29th video, the EUR/USD consolidated in what appears to be a bull flag continuation pattern and has broken out to the upside today. While the normal expectation would be for a sharp move up towards my target zone around 1.15, there are some potentially bearish developments on the intraday (30-60 min) time frames which indicate this bull flag breakout may fail, with a near-term pullback in the Euro/bounce in the $USD. 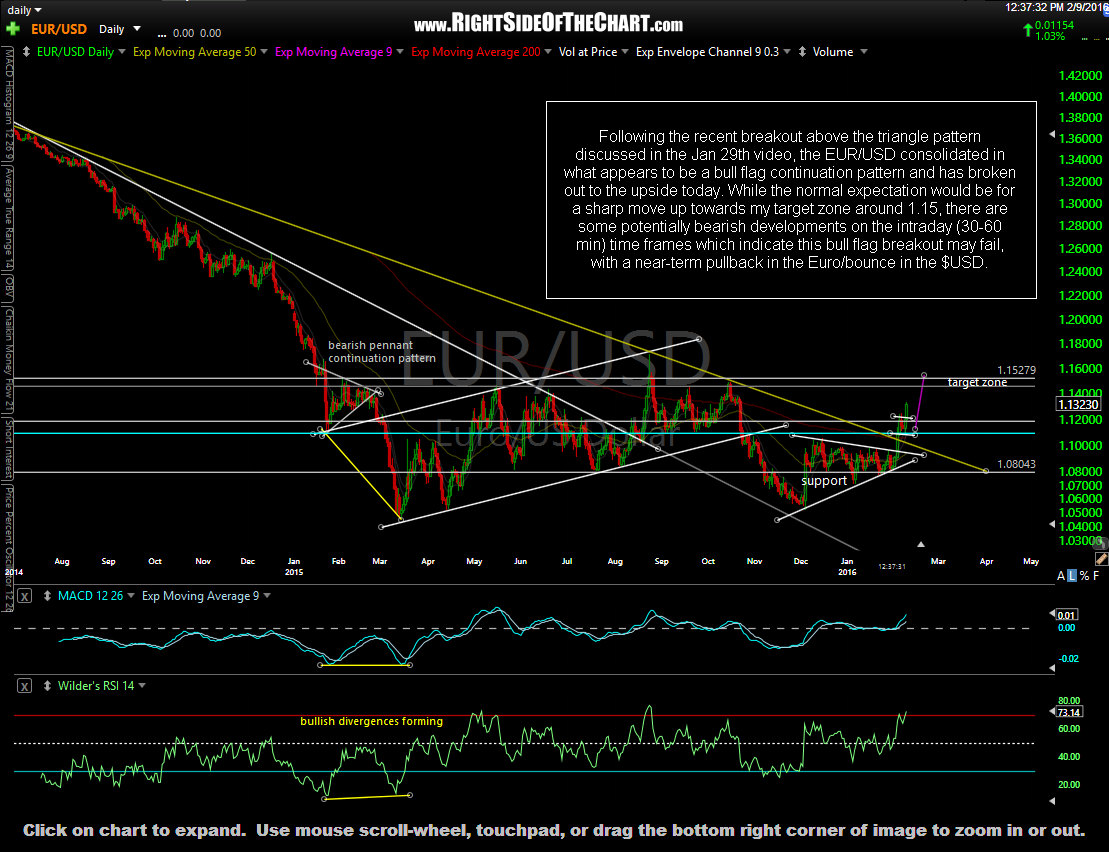 With potential divergences forming, should the EUR/USD reverse soon & confirm the divergence, a move down to the bottom of & likely a break below this rising wedge would result in a bounce in the $USD and a pullback in gold & GDX. Clarification between potential & confirmed divergence is discussed in the video. Until/unless these divergences are confirmed, there is a good chance that the bull flag breakout in the EUR/USD will play out, causing the dollar to continue to fall until my target zone on the daily chart above is hit. Bottom line, I don’t have a very strong read on whether or not this 60-minute pullback scenario (i.e.- bounce in the $USD) will play out or not but it is worth keeping an eye on as it would cause the bull flag breakout above to fail. 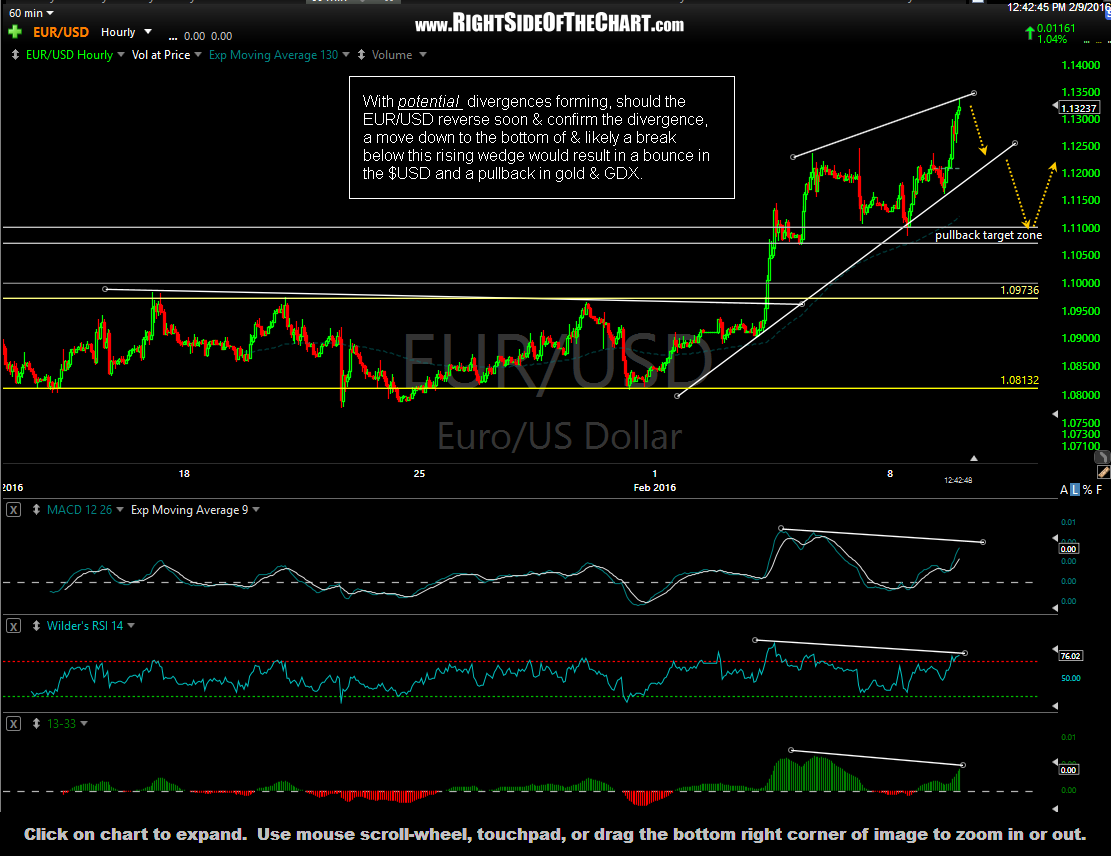 Regarding the long-term outlook, the next major trend in the US Dollar will likely be determined by the direction the $DXY breaks from the 14 month+ trading range. I favor a downside resolution although there’s still work to be done with prices in the middle of the pattern. 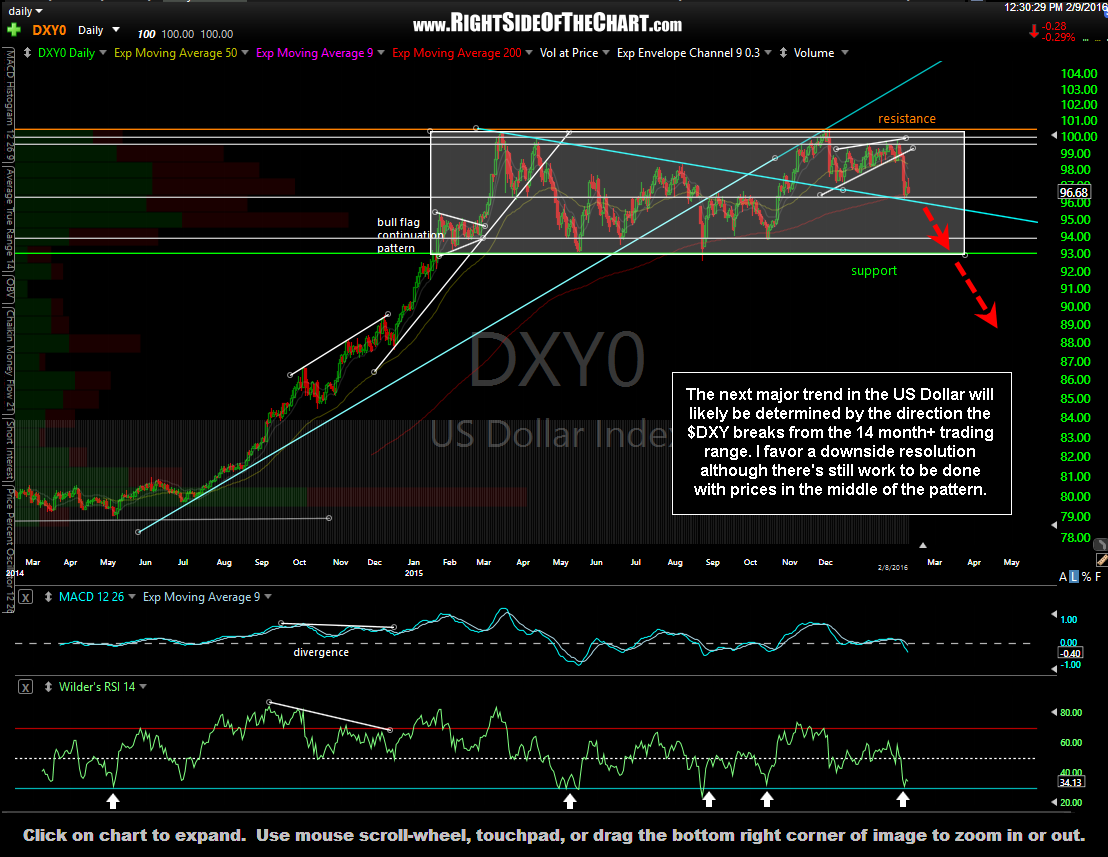