I was just asked the following questions & figured that my response was worth sharing:

Q: What’s your opinion on trading VIX? I’m looking at TVIX, which is 2x VIX, currently pretty low at $8.30s. I was wondering if it follows the same charting principles and indicators as normal ETFs?

A: Let me begin by answering the latter question; Yes, the VIX can most certainly be traded successfully using technical analysis (charting) as other financial instruments such as stocks, futures, etfs, commodities, etc… As an example, this 120-minute period chart shows just how well the $VIX trades using technical analysis: Buy on dips to support/sell on rips to resistance/buy breakouts above resistance/sell breaks below support. 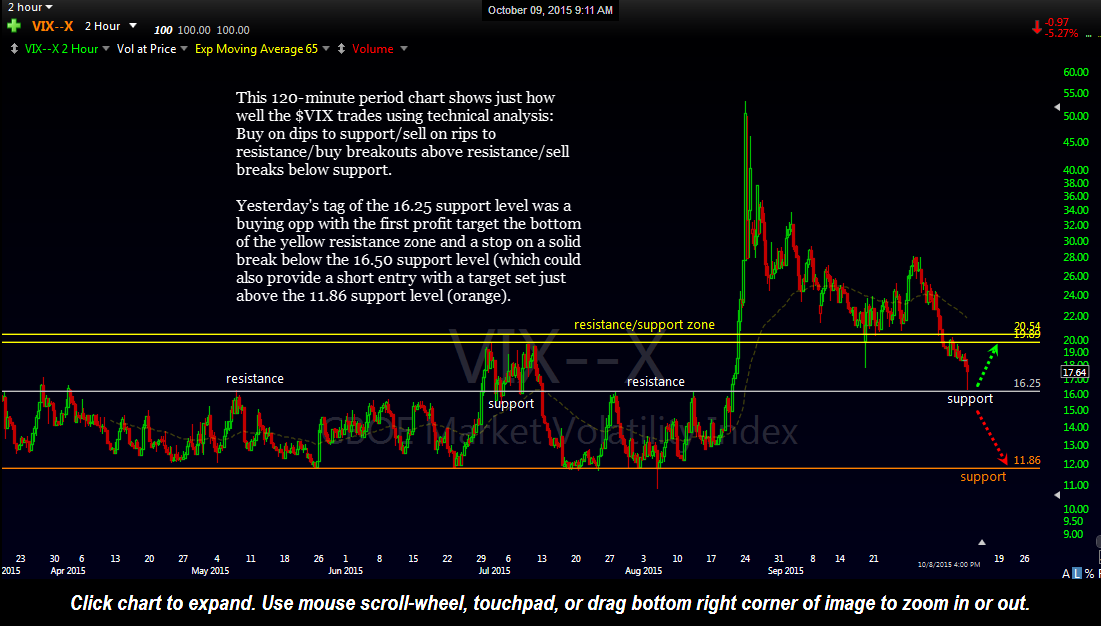 Now to the first part of the question, I could type for hours on all the nuances & numerous ways to trade the VIX or any of the other volatility indexes but in summary, my thoughts are this: To begin with, one should be aware that you can’t trade the $VIX directly, only the various derivatives that attempt to track or more accurately, forecast future increases in volatility. The VIX that we often refer to is the spot VIX index (ticker $VIX on stockcharts.com & many other platforms, VIX-X on TC2000 & freestockcharts.com). Unlike an equity index like the S&P 500, which is simply priced as the sum of the current value all it components (using a float weighted methodology) at any giving moment, the spot VIX is calculated using a methodology that uses near-term and next-term put and call options to measure implied volatility for the S&P 500.

At the risk of sounding a bit corny & sounding like the Dos Equis ‘Most Interesting Man In The World”; I don’t often trade the VIX but when I do, I prefer to trade VIX options. On even more rare occasions, I will trade one of the VIX or VXN exchange traded products or the VIX futures directly but for the most part, I only trade the volatility ETP’s out of convenience when I suddenly spot an opportunity for an long or short entry on the VIX and don’t have the time to do my due diligence on which futures contract (or option contract) to trade.

If I see a potential trading opp in the VIX setting up, time permitting, I like to pull the chain of VIX futures to see how much of a premium each contract (month) is trading. I typically prefer to trade the VIX only when at the extreme ends of its trading range. For example, over the last few years, that would entail going long when the $VIX fell down to the 10.50-11.00 area and only then, when that move is aligned with a clearly defined bearish technical setup in the broad market. For example, I wouldn’t just go long the VIX on a pullback to the 11 area, I would only do so just before or right after a breakdown of a bearish rising wedge pattern that I was tracking in the S&P 500, if I was highly confident that the broad market was about to correct.

Although the volatility tracking ETFs are certainly very convenient (trading just like any other ETF/ETP) & for the most part, many have decent liquidity (an added convenience), it has been my experience that not only is the tracking error & decay utterly abysmal over time, but I’ve often notice times of large intraday pricing disparities between the VIX, or more accurately, the VIX futures contracts that a particular tracking ETP like TVIX was supposed to be tracking.

TVIX, for example, is supposed to track the near-term future contracts on the VIX with 2x leverage. According to VelocityShares website, as of yesterday, TVIX had 68% of the assets in the Oct VIX futures & 32% in the Nov futures contract. However, you’ll often see those contracts move Y% but instead of TVIX moving Y(times 2)%, it has a much smaller gain. I will say that I’ve seen it the other way too where an ETP like TVIX is up more (or down less on a bad day) than what you would expect. I suspect some of that has to do with money flows but there are other factors such as the fund company rolling contracts, etc…

Bottom line is that these VIX tracking ETPs don’t do a perfect job of tracking the VIX or even the futures that they are attempting to track. More importantly, if used for anything more than a quick trade, you are all but guaranteed to lose money holding these volatility ETPs over an extended period of time. That is illustrated on the 2-year daily charts of the $VIX, TVIX & VXX above. Given, the decay on TVIX is exacerbated due to the 2x leverage (with TVIX losing 95% of its value over the last two years) but if you glance a chart of a non-leverage VIX tracking ETP, such as the popular VXX, you’ll see the same price decay/tracking error on a lesser scale but still very clearly when compared with the $VIX.

With that being said, the $VIX can be traded successfully, even if using these ETF but my preference would be to very selective with your entries (buying/selling well defined support/resistance/trendlines, etc…), further confirming the timing of those entries with technical patterns & developments on the underlying index (e.g.- S&P 5000 for $VIX, Nasdaq 100 for $VXN).

I would also suggest following the $VIX futures contract to look for periods of attractive or unattractive valuations. For example, I’ve seen times where the front month volatility futures are prices at a fat premium to the spot $VIX with the further out contract selling around the same price. Should that occur while I’m expecting a snap-back rally in the market, I might opt to short TVIX or maybe buy a put option on the near-month VIX futures contract.