/NQ (Nasdaq 100 future contract) is breaking out above this bull flag pattern with the 7722 resistance level just above followed by 7812 + the downtrend line. Should the bull flag breakout fail, with /NQ reversing around the 7722 R level & then falling back below the flag, that would open the door to the next wave of selling while a solid & impulsive break above the nearby R levels on both /ES & /NQ would increase the chances of the flags playing out. 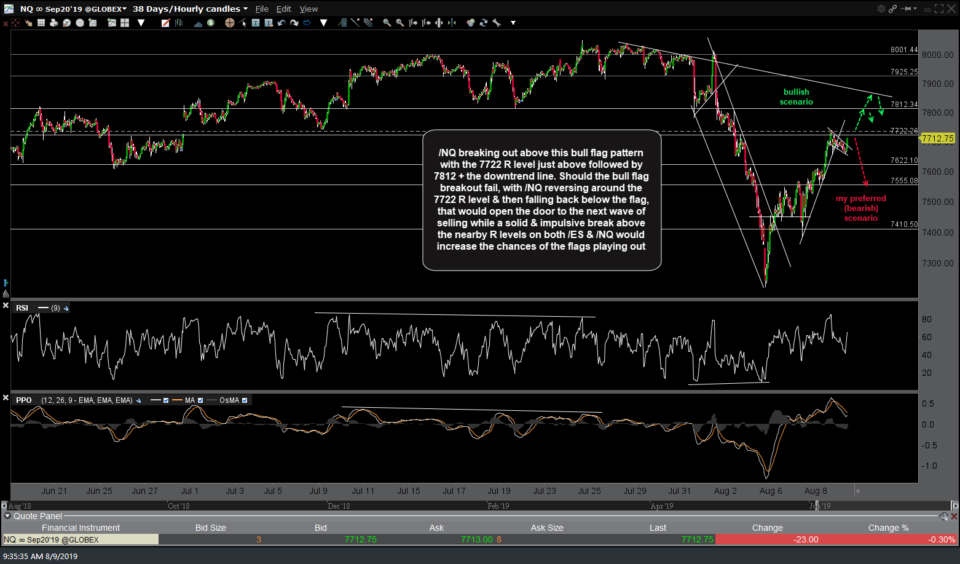 I favor the bearish scenario, which would be a failed breakout above these flags, followed by what would likely be an impulsive selloff as failed breakouts are often followed by sharp moves in the opposite direction once the failed breakout has become apparent to all. Of course, I can’t rule out the bullish scenario so watch for an impulsive break above yesterday’s highs on SPY & QQQ which were the key resistance levels & max. bounce targets that were recently highlighted. I’ll follow up with SPY & QQQ charts soon either in the comment section below or a new post.

So far seems like a fakeout. We shall see

Hi Randy, do you think if we have any trading opportunity on CL, UWT, DWT? Thanks!

I love trading crude via /CL, DWT or UWT & there was a recent setup on my 60-minute chart but I didn’t have an alert set & missed the breakout (above this downtrend line/price channel) earlier today so I missed it. Since then, CL hit & ran right through my first target of 53.69 & made a near-perfect kiss of my 2nd & preferred target of 54.77 & has stalled just below that resistance level since. While I might normally have reversed long to short there (had I taken it) or just short it here below resistance now, for a… Read more »

@rsotc Randy, Are you planning to post on SPY/QQQ or shall refer earlier levels for SPY/QQQ.

If my near-term bearish scenario of a move back down well below the bottom of Monday’s gaps & especially below Monday’s lows in SPY & QQQ pans out, that would sharply increase the odds that at least my intermediate-term targets of roughly QQQ 171-169.50 and SPY 273-270 will be hit. Additionally, if that scenario plays out, it will also increase the odds that my longer-term outlook for the market will also pan out. That has SPY & QQQ taking out the Dec 24th lows with a much larger drop all the way down to the top of the 2015-2016 trading… Read more »

Randy is it too late to enter a short position for the next few trading sessions? Or wait to see how it plays out?

I don’t think it’s too late although my preference would be a partial short position here, adding if & when both SPY & QQQ solidly move back below the bottom of Monday’s gaps & then the final lot if & when they take out Monday’s lows.

The EOD buying is still going on , last 30 minutes are crucial here ?