/NQ Nasdaq 100 futures immediately spiked into the 7907 resistance level following the release of J. Powell’s clearly dovish comments around 8:25 am today. Should /NQ manage to break out above this level which has capped the index on numerous occasions in recent months, any marginal new high will still keep the current divergences intact. 60-minute chart: 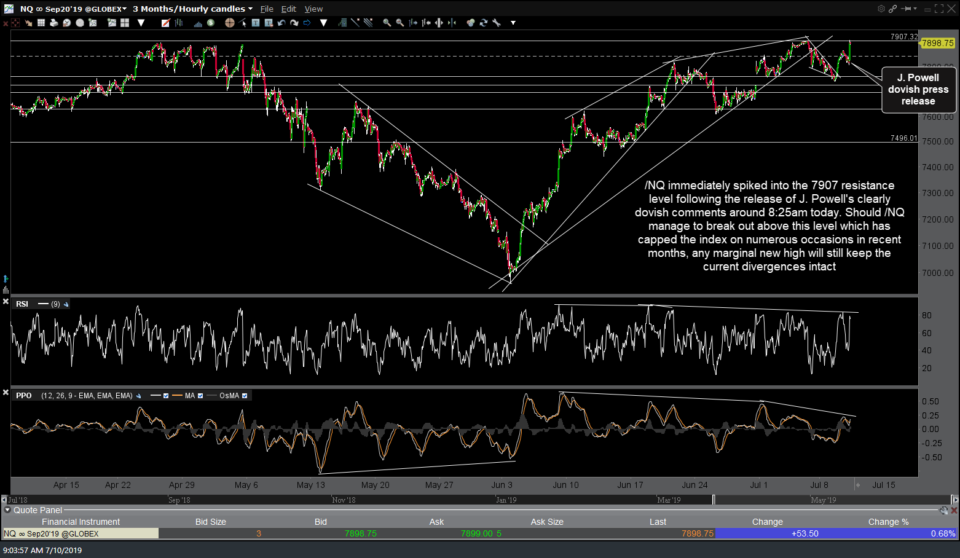 Likewise, /ES (S&P 500 futures) immediately popped up to the 2996 minor resistance level following Powell’s dovish comments. With the negative divergences at the previous highs still very much intact, any marginal new high soon would still be a divergent high which increases the odds that any breakout to new highs soon would run an increased rate of failing (i.e.- proving to be a false breakout/bull trap).

After Powell’s comments released this morning, Fed Fund futures are now pricing in an 82% chance of a 25 basis point cut on July 31st with an 18% chance of a 50bp cut.

Additionally, Fed Fund futures are now pricing in a 60% chance of another 25bp rate cut at the September 18th meeting in addition to an 82% chance of a ¼ point cut (and nearly 100% chance of either a ¼ or ½ point cut) later this month.

On a related note, as the only thing the market seems to care about now is more heroin (low rates) for the addict, I would have to agree with this WSJ article published yesterday which concludes with the following:

The true danger for shareholders isn’t that good news pushes up rates, but that bad news reawakens the recession fears that trashed the market in December. Bad news on the economy, after all, is usually just bad news for stocks.

Randy
looking at getting short again, are you planning an official short entry on the Q’s anytime soon?
Thanks

Not at this time but maybe soon if I see something compelling in the charts. I mentioned yesterday that Powell’s comments couldn’t have possibly been any more dovish & today the WSJ published a headline which read “The Most Dovish FOMC Minutes In Years” showing statistical data to back up that statement. I’ll expand on that later & of course, that is fundamental stuff so the charts (technicals) will be the primary driver behind any trades on QQQ but for now, that creates a bullish fundamental tailwind for the market so I’d like to see some pretty solid evidence before… Read more »

Thanks Randy
I can’t see myself going long right now, will wait for a short entry. Thanks again