/GC gold has been grinding around aimlessly in a sideways range between 1790 & 1700ish for the past couple of months with the next tradeable trend likely to be determined by the direction in which gold breaks from that range. Regarding active swing trading, as per my recent comments & analysis on gold, I still don’t have a good read on the near-term direction of GLD & /GC & prefer to stand aside for now & wait patiently for the next objective long or short entry. Longer-term, gold remains in a bull market & is still an Active Long-Term Trade idea. 60-minute chart below. 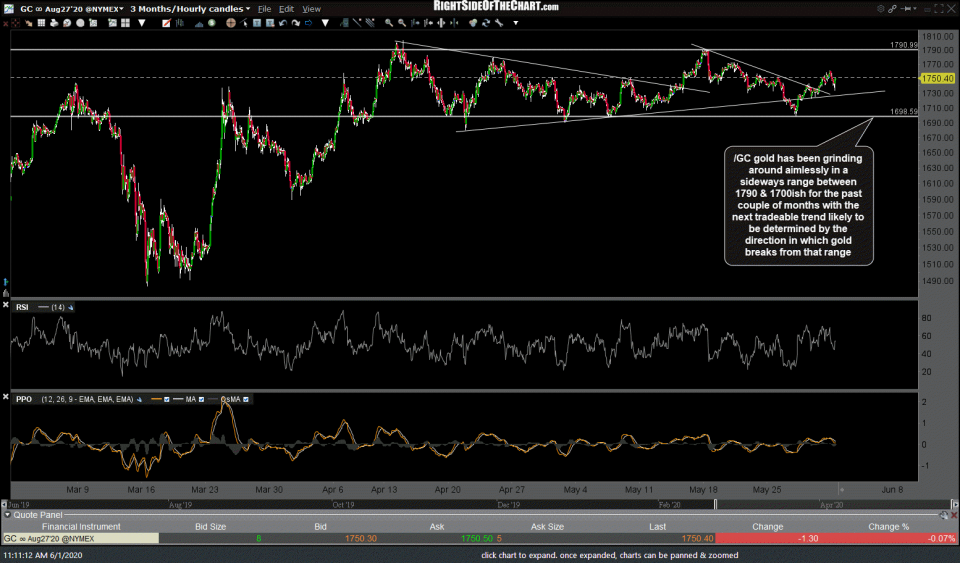 While the charts of gold aren’t providing many clues as to the direction of the next swing tradable trend, silver appears to be setting up for a potential tradable correction/trend reversal. Along with the bearish divergences building on /E7 (Euro future), /SI (silver futures) also has negative divergence on the 60-minute time frame with a sell signal to come on a solid break below this minor uptrend line along with a breakdown in the Euro & breakout in the US Dollar. 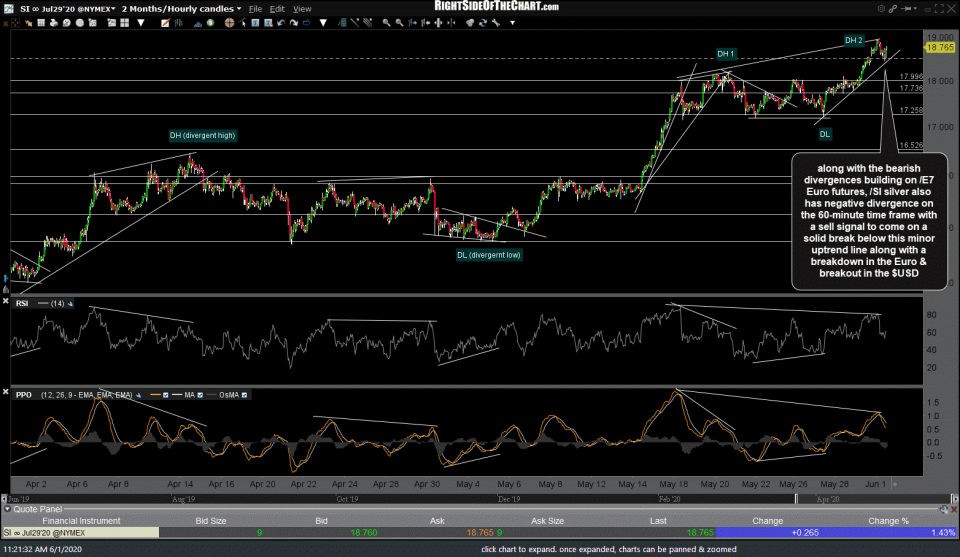 The inverse correlation between the US Dollar & silver ($USD down = silver up) is clearly illustrated when viewing SLV and UDN (inverse $USD ETN) on the 60-minute chart below. As such, I will be keeping a close eye on the charts of the $USD & Euro in order to help confirm the next sell signal on silver. 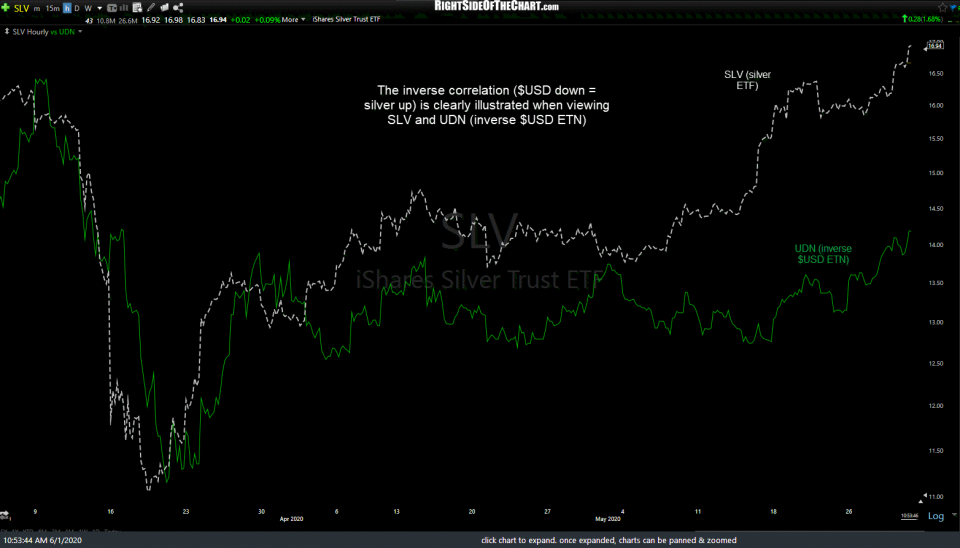 Although still solidly in a downtrend, for now, I’m on watch for any signs of a potential reversal, including but not limited to a breakout above this downtrend line on this 60-minute chart of /DX ($USD index futures). 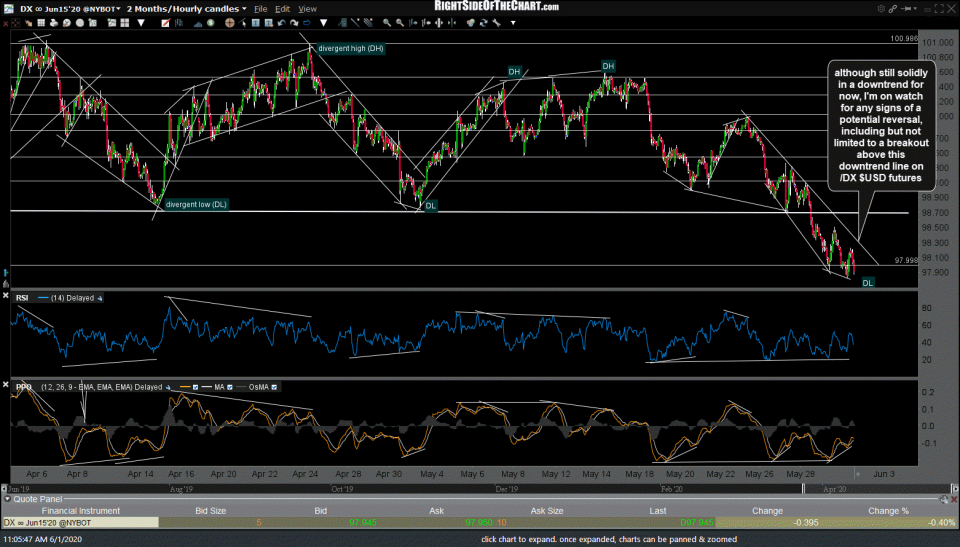 Likewise, I’ll be on watch for any potential sell signals on /E7 Euro futures including but not limited to a break below these uptrend lines as the Euro is, by far, the largest weighted component in the $US Dollar index & effectively an inverse play on the US Dollar. (Euro down = silver down & vice versa). 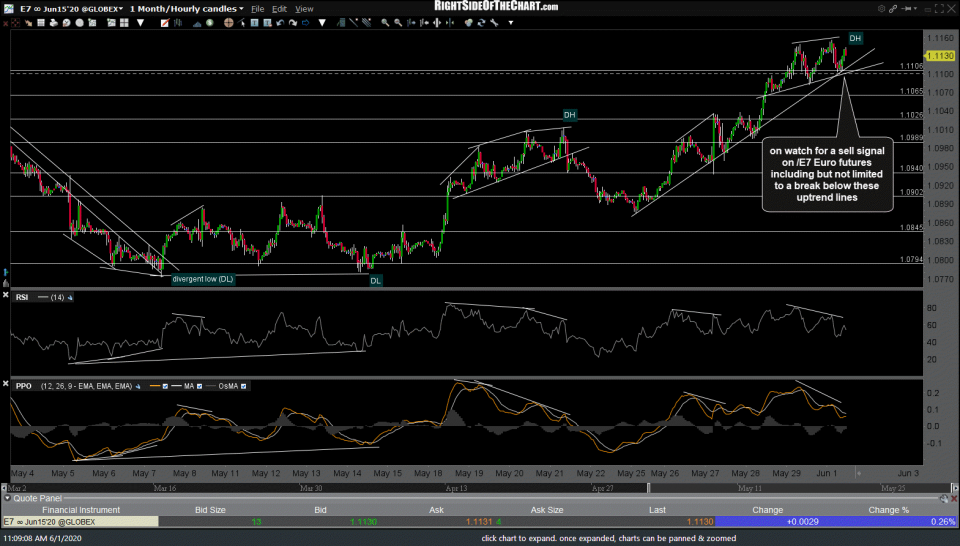 Bottom line: Silver remains in a near-term uptrend without any sell signals while setting up for a potential swing short, pending the aforementioned sell signals. Gold hasn’t responded to the recent drop in the US Dollar/rally in the Euro as silver has, with gold trading in a mostly sideways, directionless range lately. Gold does, however, still have some fairly large & clear negative divergences on the longer-term daily & weekly charts that have the potential to lead to the next correction within the larger bull market, should those divergences play out.