QQQ remains in a near-term uptrend as it continues to work higher within the lower half of the price channel. The next sell signal may come on a break below the channel although QQQ is unlikely to make any big moves until Thurs or Fri after the big earnings reports from MSFT, AMZN & INTC. 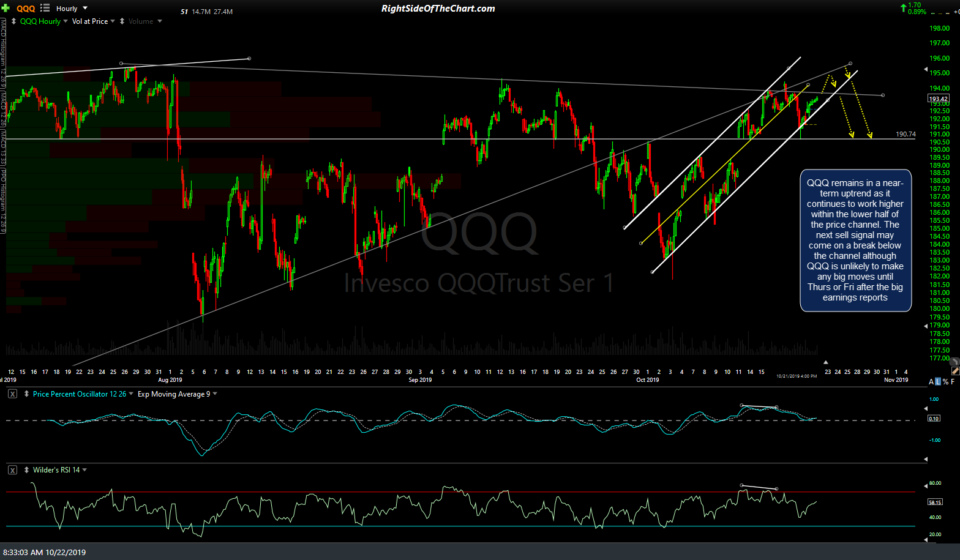 Although I don’t foresee any large moves, up or down, in the $NDX before those big earnings reports are out of the way, there are 9 reasons on the 60-minute chart of /NQ below why I favor a pullback in /NQ today even though QQQ is currently poised to gap higher at the open today. The 4 circles up top highlight the failures at the 7980 resistance levels where the 5 circles on the RSI below show the tags of the extreme oversold 85 level, all of which were also followed by pullbacks/corrections.

On a somewhat related note (as Treasury bonds tend to move inversely to the stock market), /ZB (30-yr T-bond futures) have broken out above minor downtrend line resistance following the recently highlighted divergent low on the 60-min chart with the next buy signal to come on a break above this second minor trendline.

Likewise, /ZN (10-yr T-bond futures) appears poised to rally on a break above both downtrend lines on this 60-minute chart.

TLT (30-yr T-bond ETF) and IEF (10-yr T-Bond ETF) has also fallen to trendline support on these daily charts below with decent support not far below should those TL’s go.

LIT (Lithium ETF) is still on watch for a break above the minor & primary downtrend lines. LIT, as well as numerous individual lithium stocks that are setting up in potentially bullish technical postures, were recently highlighted in this video on Sept 20th.

Thank you Randy!!! Needed these!

YW. Although I didn’t include the 60-min chart of SPY, there is a comparable price channel to that on QQQ so ideally (for a sell signal) you’d want to see a solid break and/or 60-minute close below both of those lower uptrend/channel lines. Also, keep in mind that the potential for whipsaw signals until after the regular session has opened & the initial dust following the open bell has settled on Friday (as the last of this week’s big earnings will be out of the way) is elevated.

Hello,
I read this article yesterday (https://www.zerohedge.com/commodities/gold-bull-part-deux) and tried to find the same pattern (daily: /GC) on my charts but it looked like a rather sloppy pattern but maybe I’m missing the finer details

?itok=FWCjsk_i
let me know if anyone else sees this because I’m rather unsure.

Yes. I highlighted that potential bull flag pattern on the gold weekly chart in this post about 2 weeks ago (2nd chart from the bottom): https://rightsideofthechart.com/gold-us-dollar-euro-analysis/

Very interesting this is a great learning experience thank you for clarifying; your chart is much better.

also if you get the chance, could you pretty please post one for ES?

Here’s an updated chart of /ES which just put in a divergent high & will trigger a near-term sell signal on a break below this minor uptrend line.