Bond Market Poised for Correction: Prices Down, Rates Up

Bond Market Poised for Correction: Prices Down, Rates Up

The price of bonds is typically inversely correlated to interest rates (i.e. prices up=rates down & vice versa), with the one exception being high-yield, aka junk bonds, which tend to trade more in-line with equities as they are much more impacted by the economic cycle than fluctuations in rates. With that being said, it appears to me that all major classes of fixed income; treasuries, municipal bonds, investments grade corporates as well as high-yield (below investment grade) corporate bonds are all poised for a correction in the very near future as per the commentary on the charts below: 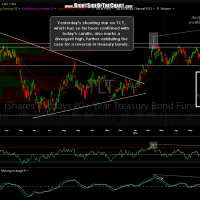 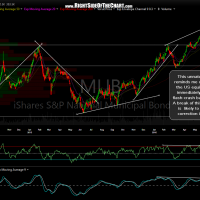 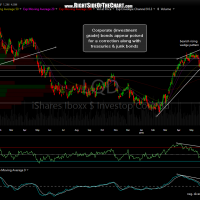 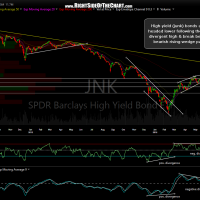 I have to say that my expectation for a correction in bonds (i.e.- prices down/rates up), especially if that pans out with treasury bonds, contradicts with my expectation for a continued selloff in equities, as typically, when stocks sell-off, treasury bond prices tend to rise (with yields falling) as we get a flight-to-safety rush into those safe-haven instruments. Occasional disconnects of the typical correlations between various assets classes do occur from time to time and I will continue to monitor the charts of all financial assets as well as global currencies closely in order to best align my analysis with the overall bigger picture of what these CB distorted financial markets are trying to tell us. As of now, it appears that both stocks, bonds & quite possibly even precious metals & the mining stocks appear to be headed lower in the comings weeks to months.
2016-06-17T12:36:10-04:00Jun 17, 2016 12:36pm|Categories: Equity Market Analysis, Fixed Income (Bonds)|Tags: JNK, LQD, MUB, TLT|7 Comments