STM was a successful long trade posted earlier this year which hit the first target on the daily frame and then pulled back sharply.  i recently posted it as a second long-side trade based off the 60 minute chart but removed it from the active trades category when my own tight stop was hit while also suggesting a wider stop for those longer-term traders wanting to give it some room, thereby leaving it as an “unofficial” active trade.  i am adding this back on as a long trade idea and have included the updated 60 minute chart below with two ideal stop levels as well as an updated daily chart.

some of the new improvements to the site include a new Trade Idea category called “Long Term Trades”.  this category is not mutually exclusive, as some shorter term swing trades, like this STM 60 minute chart, may also appear in as a regular Trade Idea, as the bulk of trade ideas posted there are swing trades with holding periods anywhere from a few days to a few months, usually averaging several weeks. however, some trades, like STM look to have potential as long-term trades based on the daily or weekly charts, maybe even some bullish fundamentals.

i will include a trade in the “Long Term Trades” category if i believe that it has the potential to be a multi-month or possibly 1 year+ long-term trade with a significant price target over that time.  a long-term swing trader or investor, like someone managing their own portfolio, maybe an IRA, on a part-time, less active basis might find these ideas useful.  typically, a longer term trade with a price target(s) significantly above current levels will allow a larger stop than a more active trader targeting a smaller move on the trade.  therefore, i will often try to list alternative ideal stops for these trades.

finally, i have also added some sub-categories to the Trade Ideas section.  you now have the option of viewing all of the trades ideas under each of the three main categories (Trade Set-ups, Active Trades, or Completed Trades) as before or you can choose to view the trades listed under each of those categories by long-only trades or short-only trades.  keep in mind that it is going to take a while to manually go through all the existing set-ups, active trades and completed trades and re-categorize them into the correct sub-category but as of this week, all new trade ideas posted are already utilizing this new categorization system.  i also plan to do a short video on the new site improvements soon.  note: being that STM has recently pulled back to the new uptrend line that i’ve added to the 60 minute chart, i am also adding this back as a Trade Set-up, since it is still offers an objective entry or add-on near that uptrend line. 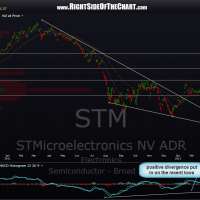 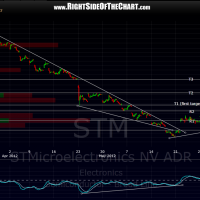