As covered in in videos back at the time, the previous SOXS (3x short semiconductor ETF) swing trade was stopped out on Aug 19th when the 44.90 stop was hit & that trade has now been moved to the Completed Trades archives to make room for a new official trade setup on SOXS. 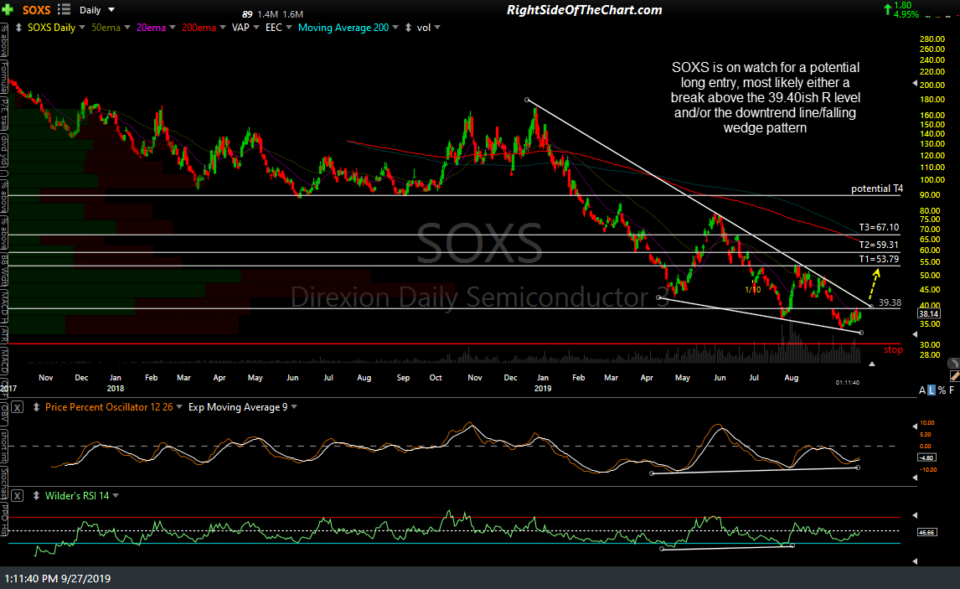 The price targets for this potential (not yet active) trade will be the same as that previous trade with T1 at 53.79, T2 at 59.31, T3 at 67.10 and a potential 4th target around the 90.00 level, depending on how the charts develop going forward. I wanted to get this setup, along with the price targets out in advance in case things happen fast as several of the uptrend lines on the indexes & market-leading stocks/sectors posted earlier are currently being tested.

I’d like to hold off on an exact entry trigger in order to see how those key uptrend lines are handled as to prevent jumping the gun on this trade again. I’m leaning towards a breakout above the 39.40ish resistance on SOXS which corresponds with the 206.70ish gap support on SOXX (1x semi ETF that tracks the same semi index as SOXS & SOXL). If & when an official entry is given for this trade, I will follow up with a suggested stop. Due to the 3x leverage factor on SOXS, the suggested beta-adjusted position size will be 0.35 or about 1/3rd a typical position size.

Thanks for this. I’ve made two poor entries into this SOXS trade this week and would like to have a profitable one.

Thanks Randy for this. I went in early around $34.5. Hoping it doesn’t get stopped out this time :-)

Newbie here…. Made good money on SOXL this year… looks like time to short