The following trade ideas will be removed from the Active Short Trade ideas category over to the Completed Trades (Short) category.

EA: This one was suggested to only short a partial (1/2) position with the criteria for the second lot never triggered. The stock went on to exceed the suggested stop of 66.00 and has been moved to the Completed Trades category.

ESS: Fell about half way towards the sole profit target before reversing & triggered the suggested stop of a move over 222.00.

HOLX: Exceeded the suggested stop of a weekly close above 37.55.

SPG: In the last update, it was suggested to lower stops to 176.60 to protect profits as the SPG was approaching the top of the support/target zone where a bounce was likely. From there, the stock did go on to bounce & exceed the suggested stop, closing the trade for a modest 2.9% profit. Following that reaction off the support zone, SPG made one additional thrust lower to tag the primary uptrend line.

DRN was also mentioned as an alternative to the SPG short with a potential target of 61.50. DRN did go on to recently hit that target for a gain of roughly 18% from entry although DRN was not listed as an official trade idea. 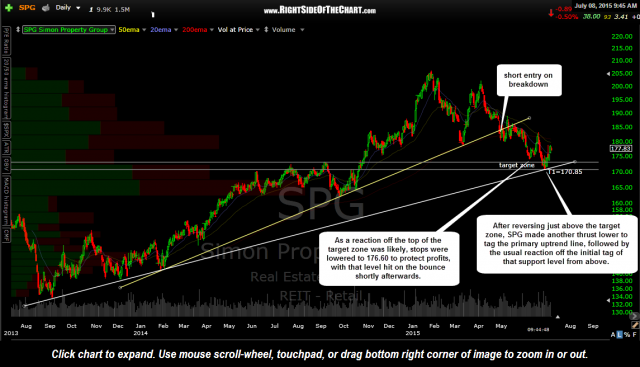 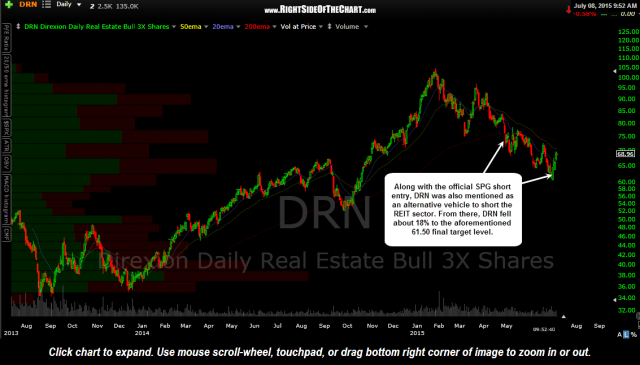 As of now, all trade ideas on the site have been updated. Some of the recent airline shorts remain as Active Trades but were removed from the Short Setups category as the R/R is no longer clearly skewed to the downside. I may decide to close some of all or those trades early (most are trading around the entry point).

ILMN is currently trading right around the suggest stop level of a 3:1 R/R to the final price target and as such, is at risk of stopping out should the stock move much higher.

HSY is still profitable, albeit by a relatively small margin, with the stock testing the previously highlighted 90ish support level for the second time since breaking down. More on HSY to come under a separate update as it remains an Active Trade for now.

For those subscribed to receive email notifications please note that all Long Trade Ideas were updated yesterday. As there were not any time-sensitive updated (all trades either hit a profit target or were stopped out before or while I was on vacation), email notifications were not sent on those updates.

At this point, I will focus my efforts on looking for new trade ideas. As always, any suggestion on sectors, industries, or individual trade candidates are welcomed.