After publishing yesterday’s Shipping Sector & Trade Ideas video , in which I covered some of the more aggressive, low-priced small, micro & nano-cap trade ideas that have the potential for explosive rallies as well as “implosive” losses, I dug into the charts a little deeper, adding many of the larger, more (relatively) stable shipping stocks to my watch-list. Additionally, I did some analysis on the shipping sector by comparing the price history of the Guggenheim Shipping etf, SEA, with that of the Baltic Dry Shipping index ($BDI) as well as the HARPEX shipping index. I had meant to cover those charts in the video but realized that I had left them out so here are my thoughts: 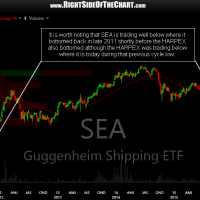 Looking at the 5-year chart of the HARPEX (Harper Peterson & Co. Shipping Index) above, you can see that following a sharp plunge, starting late 2015 the index began to stabilize right around the previous reaction lows/support that formed a floor on the index back early 2012. So far, the index has continued to hold that support for months. Looking at this 5-year weekly chart Baltic Dry Index, we can see that the $BDI, as with SEA, has started to move sharply higher since the February lows, with the $BDI putting in strong bullish divergences at those recent lows.

For those that have followed RSOTC for some time, you might recall that on several occasions in the months leading up to the late February bottom in GDX I had made a strong bullish fundamental case for the miners based on two simple, but what I believe to be highly effective measures: First, I compared the levels that the mining stocks were trading at in late 2015 as well as the bottom of their bear market in 2008 with that of gold prices, highlighting the fact that GDX was about 20% below the lowest point during its 2008 bear market yet gold prices were trading about 50% above where it bottomed during the 2009 bear market. I took it one step further, highlighting the fact that crude oil (being one of the miners biggest expenses) was trading about 80% below the same level it was trading at when the miners bottomed in 2008.

A similar bullish fundamental case can be made with the shipping stocks as crude oil is currently priced about 73% below the price it was trading at when SEA bottomed in late November of 2011, along with the HARPEX & $BDI shipping indexes (fuel is one of the expenses to the shippers). To further add to the potentially bullish case, SEA recently bottomed about 27% below it’s late 2011 lows while the HARPEX is still holding just above the it’s multi-year lows of 352 from back from early 2012 & hasn’t dropped below 360 since then or during these recent lows.

The following video, although quite lengthy, highlights my favorite trade idea among some of the more stable, larger market cap shipping related stocks along with suggested price targets, stops, entry levels as well as my preferred method on how to engage the shipping sector. As this post & video is reserved for registered users of the site at this time, please do not forward the link to this video or any of the charts in this post until they have been released for public dissemination (usually several weeks to a couple of months after the original posting date).