QQQ (Nasdaq 100 ETF) offers an objective, yet aggressive short entry here on what may prove to be the end of a counter-trend rally. As such, QQQ will be added as an Active Short Trade around current levels (181.37+/-). As the previous short trade on QQQ was intended as a relatively short-term swing trade to capture the a good part of the I believed to be the initial leg down of a much larger correction with more downside to come (which it did), the current trading plan for this trade is to attempt to capture the bulk of a potentially much larger leg down. As with any trade, the trading plan might be revised, depending on how the charts develop going forward, but all modifications to a trading plan on official trade are sent out via email in advance when published as a front page post. 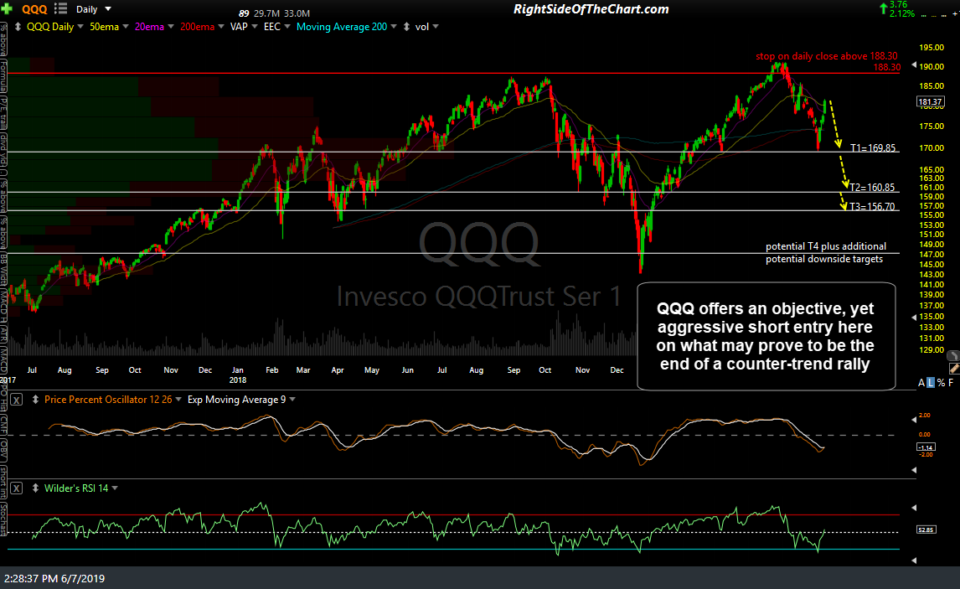 While this is certainly a counter-trend trade & as such, carrying with it an increased risk of failing (i.e.- being stopped out), the above-average R/R more than makes up for the increased chance of failure IMO. Again, this is a fairly aggressive short entry and as such, more conventional/less risk-averse traders might opt for some type of sell signal before taking a full or partial short position in QQQ.

@rsotc i am with you on the short thesis, BUT worried of huge gap on monday….what are your odds on that…i got gapped out of USO this AM…i hate gaps haha

Whether the market gaps up or not on Monday, I would put the odds of another big green close (2%+) at less that 10%. JMHO & about the only guarantees that come with the stock market is that anything is possible. As far as the gaps on stock & ETFs go, I agree they suck & they are unavoidable when swing trading. There are quite a few moving parts to be aware of when trading futures and while the high leverage factor puts the E-minis & most other futures out of reach for many traders, the new Micro futures for… Read more »

@rsotc VIX is up today with the market. Do you take any account of that in your trade timing, or is it just the targets/resistance on the chart along with the divergences?

Good question & for the most part, No, I don’t put much of a weighting on what the $VIX is doing when trading the indexes although I very much take into account my outlook for the indexes when trading the VIX, as the VIX will typically rise with the indexes fall & vice versa. There are certainly days when that inverse correlation isn’t in play but as far as the major corrections & rallies in the stock market, is almost always is.

hi randy I just joined today, do you have a full position in qqq?

Welcome raviraj75! That’s a good question. Although I’ll often use the term “full position”, a full position doesn’t mean 100% of my portfolio, just the amount that I plan to allocate to a certain position, such as index longs or short, gold, bonds, a certain commodity or individual stock, etc. While I can’t give individual investment advice, I can say that it is generally poor risk management to put 100% of one’s portfolio into a single position. As of Friday’s close I have about 70% or so of what might be a full short position on the indexes, with some… Read more »

im gonna suggest traders go back and review qqq short trades, esp. jan 31. feb 1, 11, march 6 and maybe 27. the probabilities are much higher when you have a divergent rsi DAILY, with some potential of it rolling over, a stochastic that has already topped and rolling over, and distance from the 20dma at an extreme if looking for a simple reversal scalp trade. or how about a daily candle indicator. i dont even see divergence hourly yet. it takes a pull back to create the divergence (hourly), yes, but its a micro pull back and this trade… Read more »

RSI divergence on the daily chart most certainly helps to confirm the case for a short swing trade & even a longer-term trend trade, no argument there but a large part of what is formulating my intermediate-term outlook is are the bearish technical developments on the more significant weekly charts, including but far from limited to the very larger & very clear divergences on most of the momentum indicators, including the RSI & PPO on all the major large-cap indices (SPY, QQQ, IWM, etc..). That helps to formulate the bigger picture with the timing of this next short entry based… Read more »

i appreciate the time and effort of the thoughtful response. i meant no offense.
you are right about the comments from may 7 and may 10. i missed out on that soxx trade. good luck on your qqq trade. i may join you, but from higher if it goes there.