PZZA (Papa John’s) and DPZ (Dominos Pizza) were highlighted as two of my favorite trade ideas in this video from April 1st, making both a technical as well as a fundamental case for those market-leading pizza stocks as people were staying at home with pizza as one of very few takeout or delivery meals that are essentially not at risk for transmitting the Coronavirus as it comes directly out of a piping hot over (killing any harmful viruses or bacteria that might have been transmitted during preparation), straight into a sealed box via a long-handled spatula without touching human hands. (The daily charts of PZZA in a gallery format below will not appear on email notifications but may be viewed on rsotc.com) 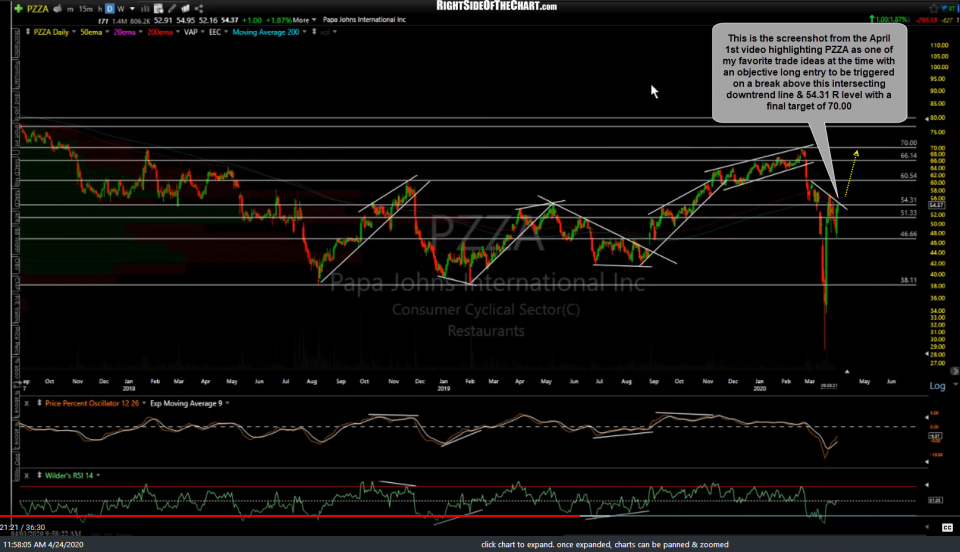 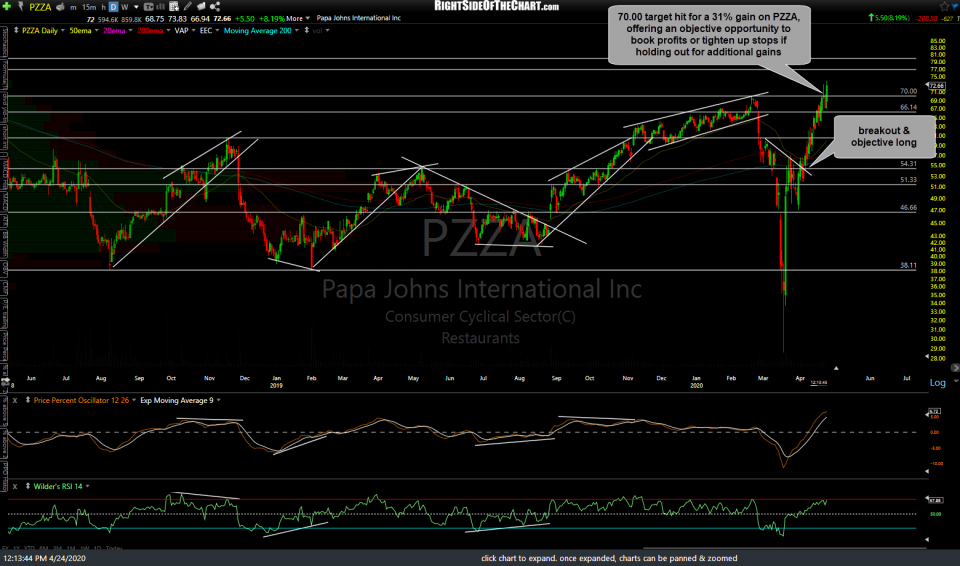 I had stated that PZZA would trigger a buy signal/objective long entry on a breakout above the intersecting 54.31 price resistance + downtrend line resistance, which the stock went on to do shortly after that, rallying in a near-vertical advance 31% since then to hit my final target of 70 on Wednesday, followed by the typical reaction so far (a pullback on Thursday & the stock still consolidating around that 70 resistance level. This provides an objective opportunity to book profits or raise stops if holding out for additional gains.

DPZ was the other pizza stock mentioned although the stock wasn’t offering a clearly objective entry at the time as it was trading in “no man’s land” (between support & resistance) but did rally over 20% since then. As states & local municipalities being to relax stay-at-home orders along with COVID-19 fears subsiding, it is probably safe to assume that a lot of folks are “pizza’d out” for the time being. If so, we could see a drop-off in pizza sales as other restaurants with more diverse offerings gradually come back online but as always, the primary basis for this or any trade is that a case for shorting the stock can be made technically (i.e.- from the charts). 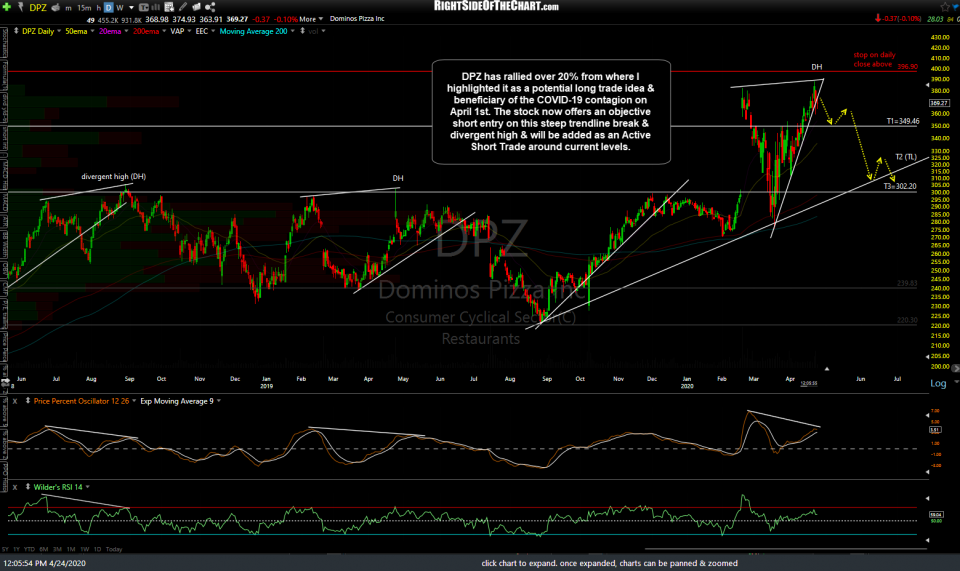 DPZ offers an objective short entry on this steep trendline break & divergent high & will be added as an Active Short Trade around current levels. The price targets are T1 at 349.46, T2 at the uptrend line off the August 2019 lows, and T3 at 302.20. The suggested stop for this trade is a daily close above 396.90 with a suggested beta-adjusted position size of 1.0. DPZ reported earnings yesterday (hence, the green light to short it now) with PZZA scheduled to report before the market opens on May 5th.

MNK was another one of the long trade ideas covered in that video with the stock breaking out above the downtrend line to effective hit the 4.15 price target (I always suggest booking profits just shy of an unofficial target/resistance level & did mention doing so at the time when MNK came within pennies of 4.15) for a quick double (nearly 100% profit). I’m still standing aside on MNK for now although watching for another potential objective long entry if the stock can take out 4.15 with conviction. Screenshot of the daily chart from the April 1st video followed by the updated daily chart below (must be logged onto rsotc.com to view). 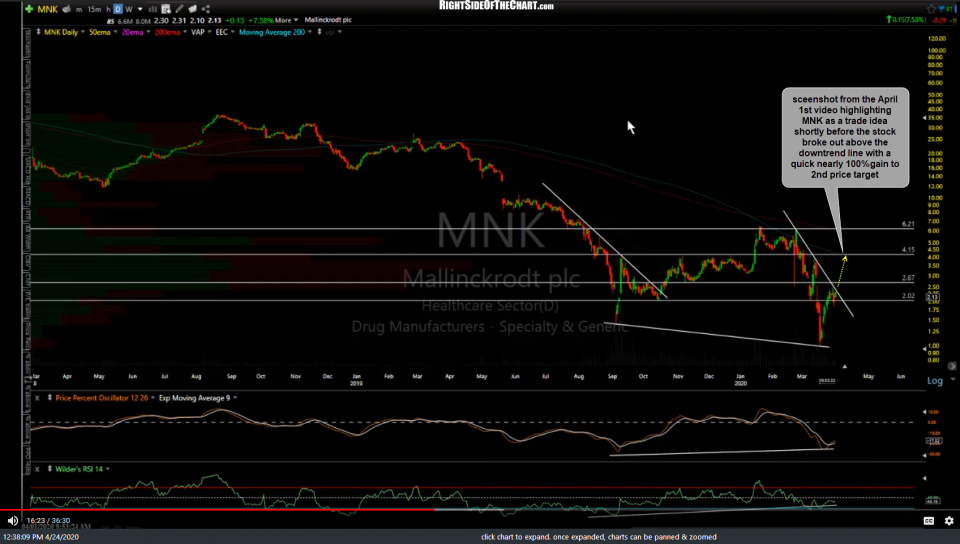 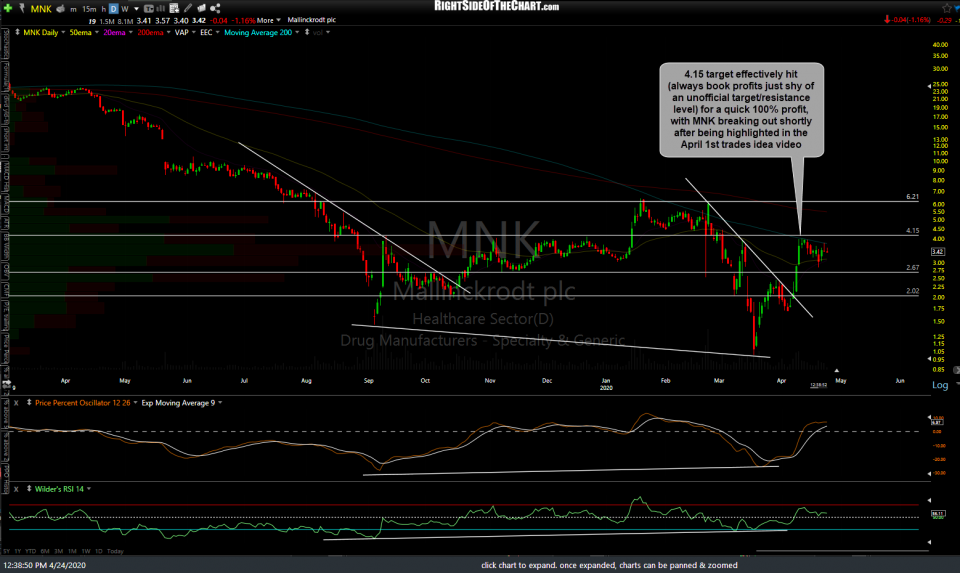