Should SOXX (semiconductor sector ETF) fail to backfill today’s gap & then some by the 4pm close, it will have put in an Island Cluster Reversal topping pattern as discussed in yesterday’s semiconductor analysis video. SOXX and/or SOXS are under consideration as an official short trade although two things are giving me pause at this time:

As such, I’m passing this one along as both a potential trade setup as well as an unofficial trade idea for a short entry on SOXX at current levels. Island Cluster Topping patterns have a fairly high success rate of playing out for a major top/trend reversal. Even if that does not prove to be the case here, I can say that SOXX offers an objective short entry with an attractive R/R as one can short SOXX here (or go long 1/3rd a position of SOXS) with a stop anywhere from the mid-point of the Island Cluster up to slightly above the top of the pattern. That would limit any losses to about 3-5% while providing a gain potential of 3x-10x or even more, depending on how the charts develop going forward. 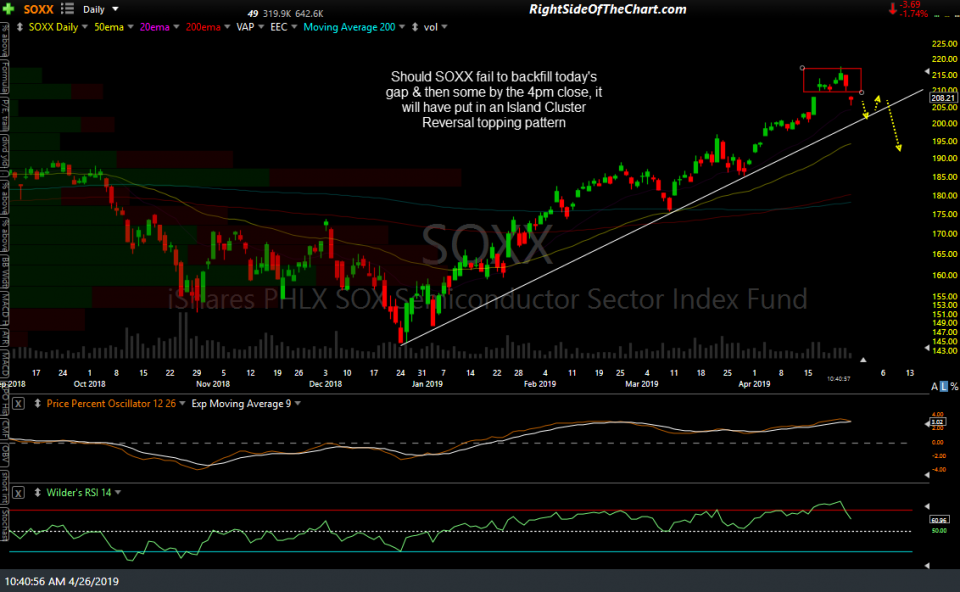 With QQQ & XLK (tech sector) still very solidly entrenched in an uptrend & yet to breakdown, it might be best to only take a partial (1/2 or 1/3rd) position here, bringing SOXX to a full position on an impulsive break and/or close below the primary uptrend line, assuming that QQQ & XLK have both also broken below trendline support at that time. As Island Cluster Reversal patterns tend to come at major tops, I’m not overly concerned with any near-term price targets on SOXX at this time although my minimum swing target, again if all of the above breakdowns/sell signal end up triggering, would be the 198-190 area.

For those that don’t want to risk jumping the gun, as the rally off the Dec lows has been plagued with false/failed sell signals, I will continue to monitor the semis closely & should we get an even higher-probability sell signal which still offers an objective entry, I will likely add SOXX and/or SOXS as an official trade in which case exact price targets, suggested stop(s) and other trade parameters will be included.

Randy, from an Elliot Wave point of view that looks like a ABC correction with the SOX with wave C almost 100% of wave A.