Slow day in the market as I suspected as the market is in a holding pattern with the first two of the 5 market leading FAAMG stocks scheduled to report after the market close today (FB & MSFT). The fireworks could start after the closing bell today & continue throughout the rest of this week as the other FAAMG stocks & over 1/5 of the S&P 500 components finish reporting, with volatility likely to continue into next week &  beyond.

As I’m not trading today I’ve taken the time to update the Long Trade Ideas on the site. All of the trades listed under the Short Trade ideas are still active, all are profitable & all still look fine at this time. The following Long Trade Ideas have either hit one or more price targets and/or exceeded their maximum suggested stop & will be moved to the Completed Trades archives, along with all related posts:

GILD (Gilead Sciences): Although it was already mentioned in the trading room & on the front page, I had not posted an official update on GILD trade that was stopped out back in November. GILD was added as a Active Long Trade on Nov 7th with a tight stop (too tight in hindsight) of any move below 72.00 (i.e.- 71.99). The entry was based off the backtest of the 2½ year downtrend line, which GILD did mount an explosive rally off of, only that rally started after an brief intra-week dip below the trendline that ran our stop for a minor loss of 1.4% with the stock rallying 28% over the next 2½ months following that stop-raid (it was a perfect backtest of the trendline on a weekly basis without any weekly candles closing below the TL). Previous & updated daily charts below. 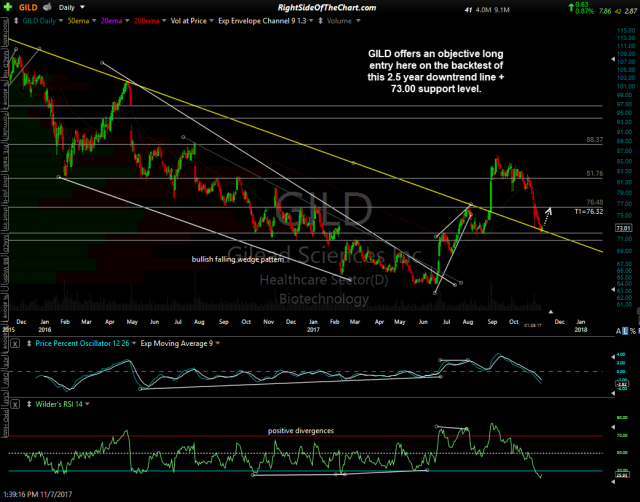 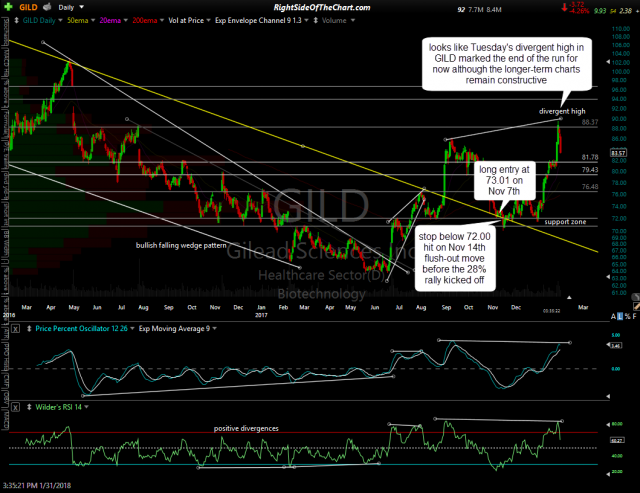 NIB (cocoa ETN): NIB was added as an Active Long Trade on August 14th, moved slightly lower over the next two sessions, reversed & from there rallied in a well-defined uptrend, hitting T1 for a gain of 8.6% on Oct 3rd & then hitting the final target, T2 at 26.87, for a profit of 16.2% on Nov 8th with the stock reversing just two trading sessions later & plunging 20% over the next 5½ weeks… a nearly perfectly timed entry & exit. I had mentioned NIB hitting the final target on the front page & trading room but had not posted an official update until now. Original & updated daily charts below: 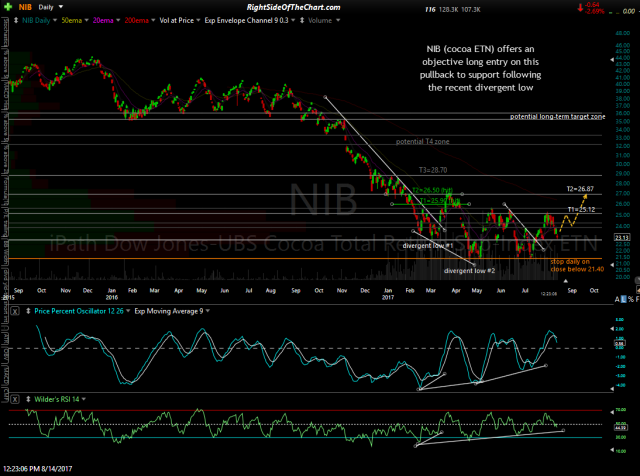 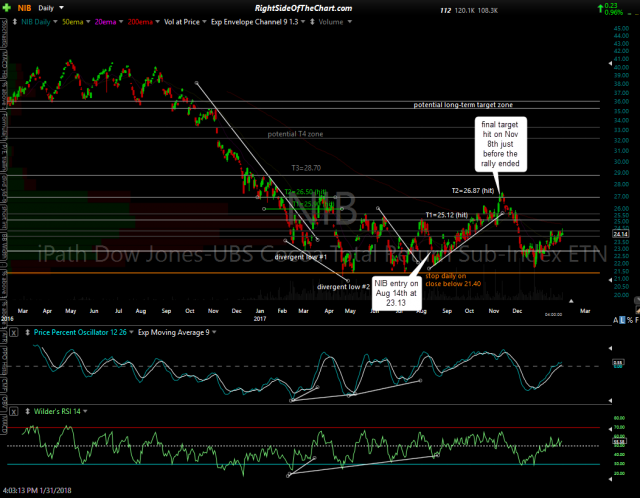 RDUS (Radius Health): I had very strong convictions on this trade, adding it back as a new official long trade on Dec 5th right after the stop on the previous trade was barely clipped. The entry price on this trade was 27.71 & in line with what I can only say what the highest number of stop raids on long trades back in the 4th quarter of 2017 that I can ever recall, RDUS fell (once again) just two more trading sessions following that entry to clip the very tight stop of 27.18 for a minor loss of just 1.9% with the stock going on to play out as expected & rallying 60% from there, hitting all 3 price targets & then some. I reiterated my bullish outlook for the stock on several occasions after that second stop-raid & congrats to those that gave it a little more room on their stops & held. Officially, this trade was stopped out for a 1.9% loss. Previous & updated 60-minute charts: 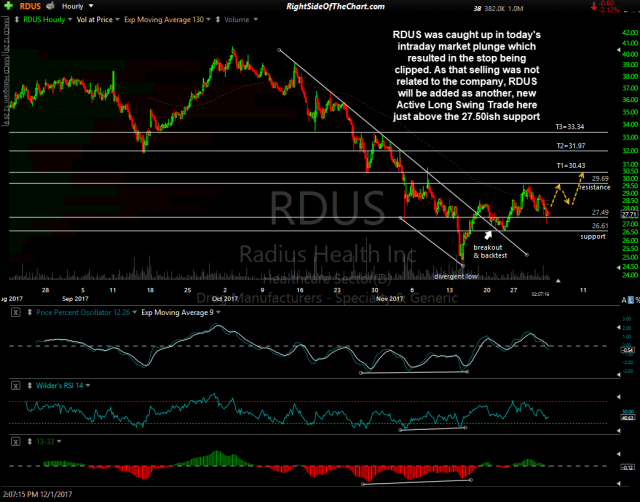 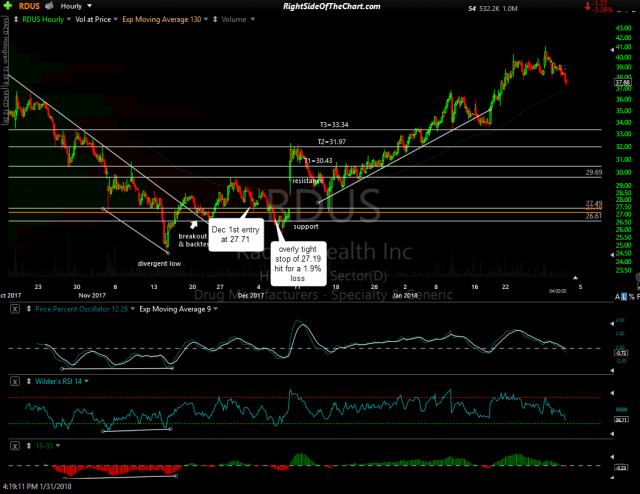 SR (Spire Inc): SR was added as long trade at 68.90 on January 12th & exceeded the suggested stop of any move below 67.30 (i.e.- 67.29) for a loss of 2.3%. I don’t like the look of the chart or the recent price action on this one & could see the likelihood of more downside before a meaningful bottom in the stock. Previous & updated daily charts: 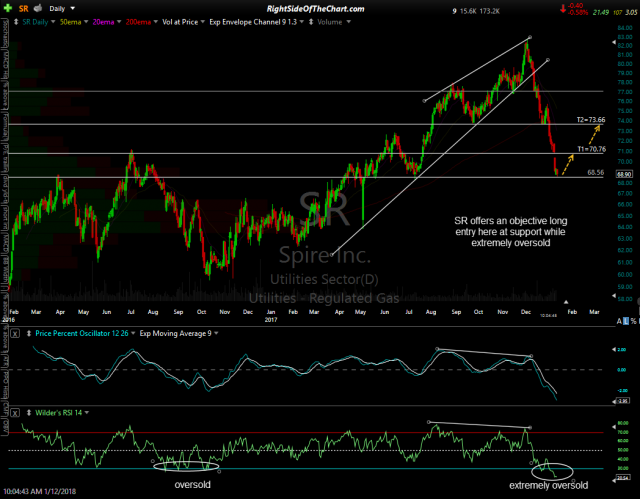 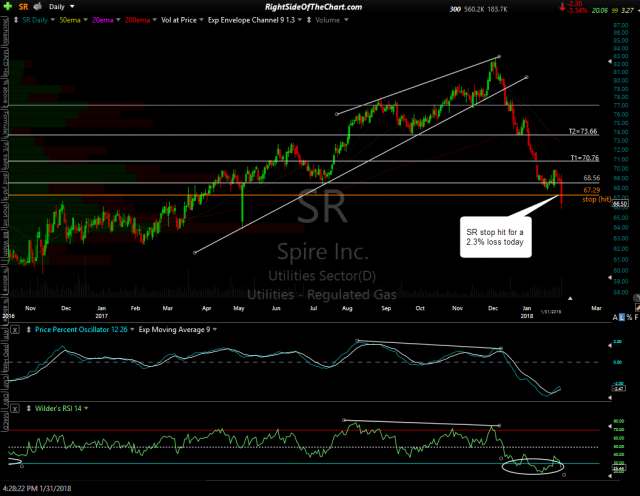 TNDM (Tandem Diabetes Care) was added as an long on January 10th at 3.44 & went on to exceed the suggested stop of a daily close below 2.90, closing at 2.81 on Jan 16th for a loss of 18.3%. As this was a very speculative & aggressive trade, the suggested beta-adjustment of 0.6 effectively accounts for a loss of 11% (18.3% x 0.60). The entry was based on a breakout of the 3.43 resistance level but that breakout proved to be a false breakout/whipsaw signal with the stock immediately falling back below that key level. TNDM is still on watch for another break above 3.43 & another potential long trade. 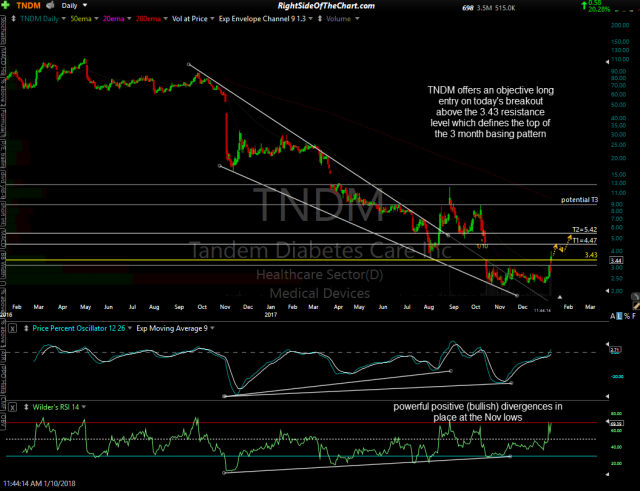 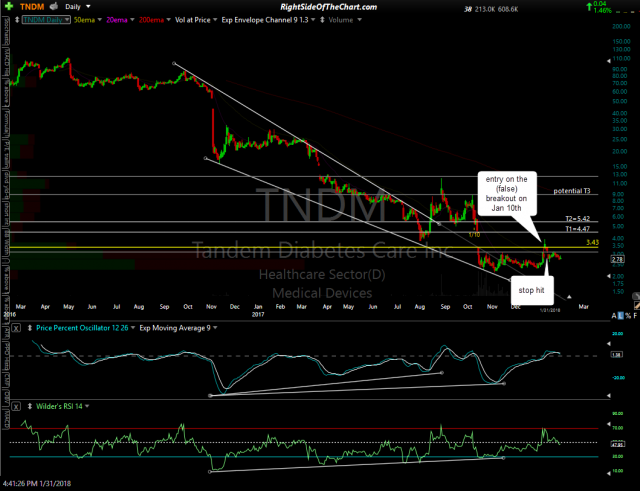 WEAT (wheat ETN) was added as an long back on August 18th at 6.58 with a suggested stop of a daily close below 6.40. WEAT climbed as high as 6.76 from there but failed to hit the first target at 6.92 before reversing & being stopped out on Oct 11th when WEAT closed at 6.38, providing a loss of 3%. As mentioned in the recent updates, WEAT along with the other grains has been rallying following some bullish technical developments & price action. 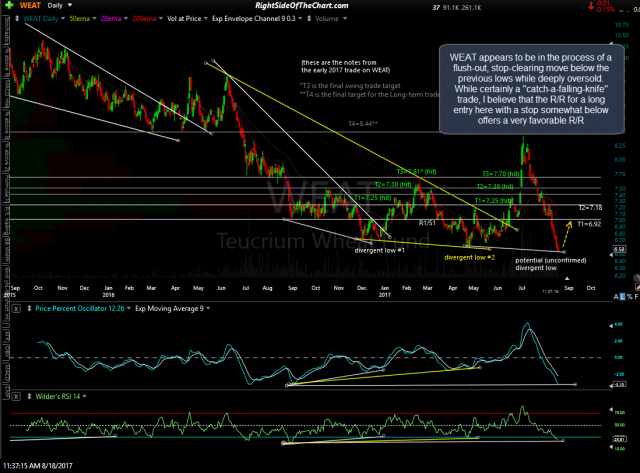 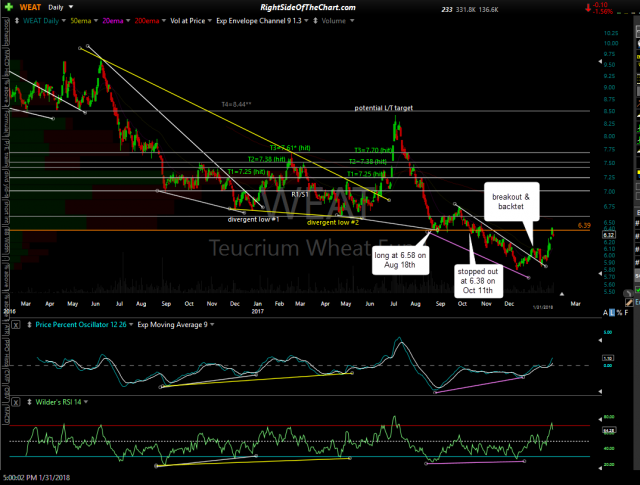 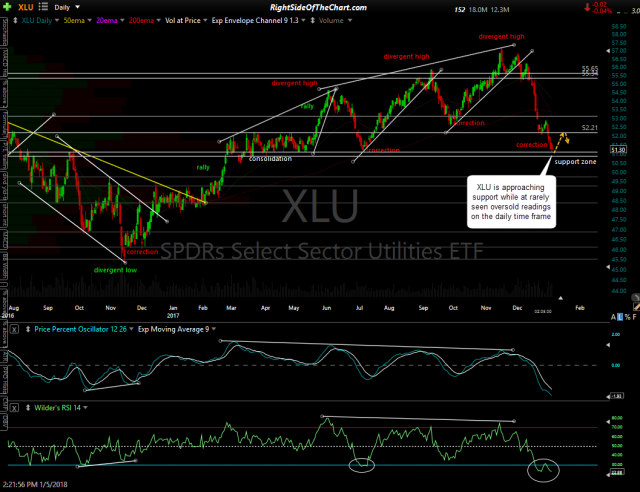 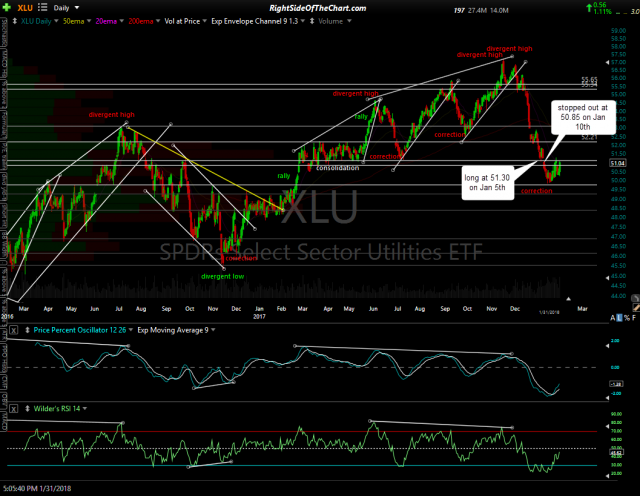 At this time, all of the trade ideas are up-to-date with all trades listed as Active Trades still active (i.e.- they haven’t exceeded their suggested stop or hit their final price target). I also have a fairly large number of new trade setups that are candidates for official trade idea, some of which will be posted this week.