Yesterday I had posted a handful of stocks to watch today as they were scheduled to report earnings after the close or before the open today. Interesting enough, most of those stocks have gapped above or below the key technical levels that were highlighted with some reversing at or very near the key nearby support or resistance levels. Here are a few stocks scheduled to report after the bell today or before the open tomorrow that either have the potential to move the market or may be of interest to those already positioned in any of these names.

FB (Facebook), as one of the market leading FAAMG stocks, certainly has the potential to move the stock market one way or the other tomorrow. On the daily chart below, this 4th divergent high in the last 2 years indicates that any post-earnings move after FB reports tonight is more likely to be to the downside vs. the upside, despite the current uptrend. However, should FB gap up and close substantially higher tomorrow, that would most likely negate the negative divergence that is current in place on the PPO (although the RSI divergence would likely persist). 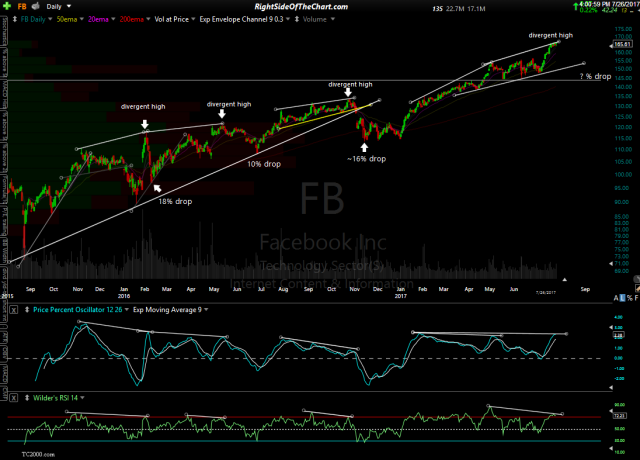 For months now, I’ve been posting the bullish case on GILD for months now with the 64.75 level as long-term support with the potential to spark a reversal & break above this large bullish falling wedge pattern, which it did. While the longer-term outlook is still favorable, any post-earnings rally this week is likely to be capped at the yellow downtrend line just overhead. As such, for those currently long the stock from the 64,.75ish level and/or wedge breakout, any post-earnings pop towards the 76.50ish level could provide an objective level to book partial or full profits while any gap significantly above that level would be bullish, with the next target around 81.75 & then 88.30. Also worth noting is the relatively small but high-level negative divergences that have formed on the daily time frame below. 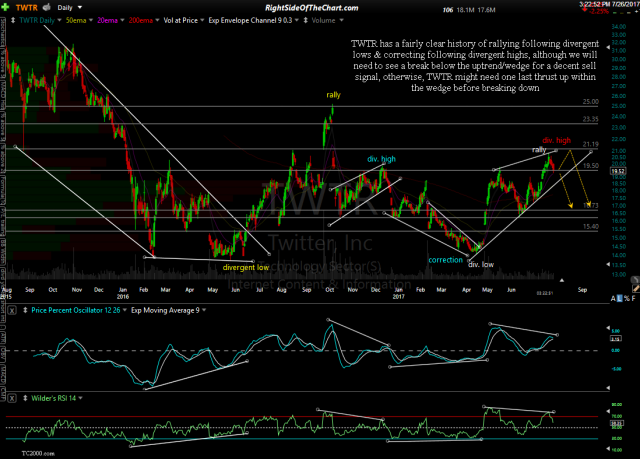 In this post from shortly after the start of the year covering BMY, (Bristol-Myers Squibb) which is also in the link to the recent analysis GILD above, I had covered both stocks, sharing my bullish outlook for GILD but a clearly bearish outlook for BMY (both in the healthcare/drug industry yet completely divergent technical outlooks). From that point, GILD has rallied about 15% while BMY almost immediately resumed the downtrend following a bear market rally, falling another ~20%. However, the chart of BMY firmed up quite well following that last big trust down with the stock printing strong bullish divergences on the daily time frame later that month & going on to mount a decent rally. BMY more recently broke above the downtrend line off the early Jan highs (where it was trading in that previous post) & made a successful backtest of that trendline about a week ago. While I’d prefer to wait until earnings are out of the way, BMY could provide another objective long entry soon.

Finally, I recently mentioned the transportation sector, particularly the railroads & airlines as two of the more promising sectors on the short side at this time. LUV (Southwest Airlines) has made a near vertical descent since breaking down from the bearish rising wedge pattern with the only green candle since the breakdown coming today, exactly where expected as the stock just hit my first price target. Based on the scope of the pattern & the negative divergences below, I expect more downside in LUV as well as the majority of the airline stocks in the coming weeks & months although with LUV reporting tomorrow before the open, this current reaction/bounce off the initial tag of that support/target from above could certainly continue for a little while before a resumption of the downtrend & break below this 58.60ish support level. Next targets 54.30, 51.35 & possibly 48.20ish. 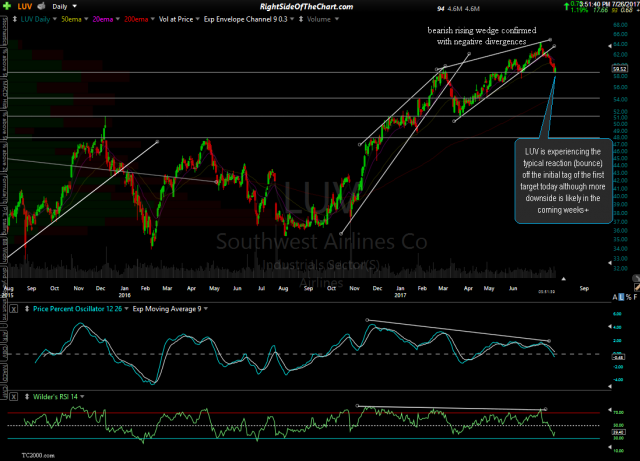