A solid break and/or 60-minute candlestick close above this downtrend line would likely spark a rally in /CL (crude oil futures) up to the 52ish resistance zone & if so, that should help to firm up the case of a major reversal on the more significant daily chart. 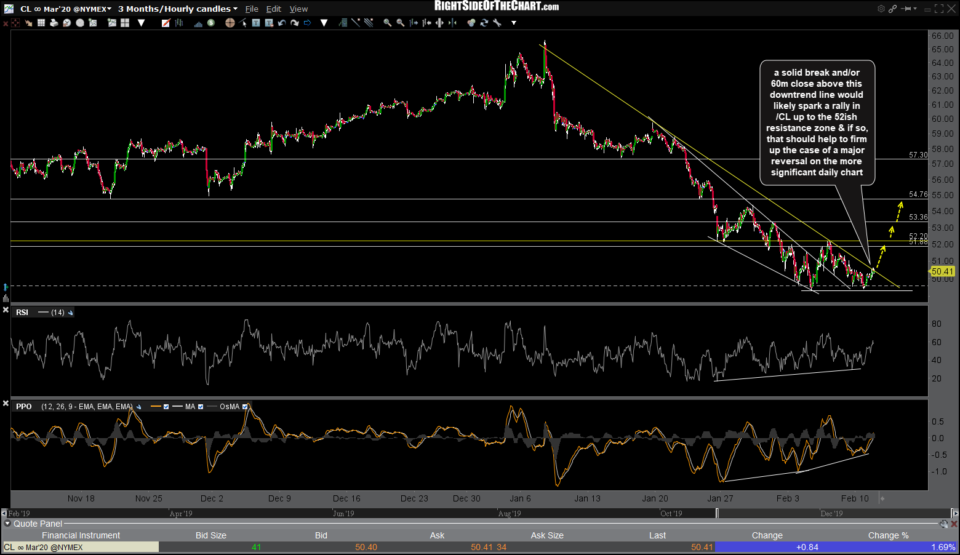 Meanwhile, the USO (crude oil ETN) Active Long Swing Trade is hanging in there, for now, remaining above the suggested stop as crude oil continues to hold long-term support & the bullish divergences continue to build.

Two points to keep mind though: 1) Divergences between two correlated assets classes can continue for quite some time and 2) the ultimate reversion to the mean can manifest in several ways (i.e.- crude up & stocks down; both rallying with crude rallying faster as back in 2017; stocks falling & crude trading flat or falling less; etc…) With that being said, as of now, it still appears to me that a case for a significant bottom or at least a decent oversold bounce off long-term support on crude oil from at or around current levels can still be made, especially if the stock market continues to rally in the near-term.
0
2020-03-19T23:47:23-04:00Feb 11, 2020 9:13am|Categories: Completed Trades - Long, Gold & Commodities|Tags: $WTIC, CL, USO|12 Comments

Still would like your update on the VIX and TVIX please.

It gapped down, within spitting distance of ATL. What update are you looking for? If you believe market is topping, you enter between $41 and $39, if not, stay away, pretty simple.

Gotcha. TVIX is a many headed snake. Not sure how long you have been a member, but it crushed me for $40k last year. Randy had it as a buy around $20 and in a blink it was $12, then $10, then $8. My opinion is that it is a 3-4 day play, like pulling a slot machine. Please be very careful from someone who knows. In my opinion, entering here is a nice risk reward, as you only have a $2 downside and at least a $15 up. But being that you are already in makes it rough. The… Read more »

Cost me -50% of my entire portfolio, bought bottom of Dec 2018 low (TQQQ/LABU/SOXL), but got affected by this bearish sentiment in this channel sold way early on JAN, I used to be buy&hold type of guy, thought I was learning stuff here, wedge/divergence all year long, made little here and there, but I should’ve 4X my portfolio if I don’t do anything, instead -50%… I’m not blaming anyone here, but this is just nuts…

I was also long those and/or quite a few other indexes & sectors off the Dec lows & also sold way too early but hindsight is 20/20 and even to go back then, I stuck to my trading plan & booked profits when the price targets on those swing trades were hit. Again, in hindsight, I wish I had seen enough evidence in the charts to convince me to tuck those longs away but my primary style is swing trading, with holding periods typically measured in weeks to month: In, out & onto the next trading opp. As far a… Read more »

I remember your posts on TVIX last year & sorry to hear that you were stung so bad on that one. Keep in mind that previous official trade on the $VIX from last year was entered at $22 and hit the suggested stop of a daily close below 18.48 for an 8.1% beta-adjusted loss (23.1% loss X the suggested beta-adjusted position size of 0.35): https://rightsideofthechart.com/tvix-stopped-out-for-8-beta-adjusted-loss/ If there is ever an ETF/ETN that one should let run against them without using stops, TVIX would be right up there at the top of the list. Expensive lesson to have learned but as… Read more »

Are you asking if I think the stop should be lowered to give the trade a little room since the continued rally in the stock market is likely to eventually spill over to crude sooner than later? If not, please clarify and if so, then I would say yes, one could certainly give a crude long position a little more room to allow for a potential bottoming process & possible final wash-out spike down. I’m going to stick with the suggested stop of a daily close below 10.37 on the official trade for now, even if there is a decent… Read more »

I can’t say that the market is topping right now as there isn’t the slightest evidence of a top/reversal at this time. Divergences & overbought conditions have been building for months but those are not sell signals, merely potential bearish developments pending a sell signal on the daily & weekly charts (at minimum, to say the market has likely topped). The basis for the long on crude was simple: Extremely oversold while falling to a very significant long-term support level. It either works or doesn’t but either way, I’d take this shot 100x over as the R/R is very compelling… Read more »

Nothing new from a technical perspective on $VIX & TVIX over the past few sessions. $VIX has been backtesting the downtrend line for the past 5 consecutive days now, holding up surprisingly well considering the persistent advance in the stock market. As of now, the trade still looks fine from a technical (charting) perspective with the $VIX still holding above the downtrend line & TVIX remains above the suggested stop for now. Should the market continue to run much higher/longer, the trade will probably be stopped out but as of now, I don’t see enough evidence in the charts to… Read more »

Randy Do you recommend any of the Midstream ETF’s?

I spent quite a bit of time building numerous watchlists on MLP’s in various sub-sectors yesterday & today and I’m working on narrowing down a watchlist to some of my favorite setups which I will be posting soon. Here’s a comprehensive listing of MLP’s, many of which are midstream companies. https://eic.energy/uploads/MLPsOnExchanges_01032020.pdf
..As well as some MLP & MLP related funds & indices: https://eic.energy/uploads/MLPFundList_01032020.pdf