As a follow-up the Generic & Specialty Drug Manufacturers Trade Ideas video posted earlier today, several of the trade ideas in that video were also components of the cannabis sector including MJ (cannabis ETF). As the official trade ideas remain very light due to the unfavorable R/R of the broad market (a near-term uptrend that appears to have limited upside with a backdrop of increasingly bearish technical developments on the longer-term charts), my focus remains on stocks within sectors that have very little, if any, correlation to the broad market such as the shippers & cannabis stocks.

As such, I plan to post a few official swing trade ideas in the G&S Drug sector which includes the cannabis stocks. In doing so, I’d like to reiterate my preference for either taking a shotgun approach (buying small amounts of several or more of the best looking trade ideas in the sector in order to diversify & ‘spread my bets’) or for those looking for simplicity it is probably best to stick with an ETF such as MJ, which I will follow up with a chart & price targets asap.

One of several leading cannabis stocks that looks poised for a swing-tradable counter-trend rally is ACB (Aurora Cannabis) which will trigger a long entry for any official trade on a break above 3.85 (i.e.- any print of 3.86). The price targets for this trade are T1 at 4.05, T2 at 4.61, T3 at 4.89 & T4 at 5.35 with T2 being preferred target at this time (as I’d like to see the charts of the sector firm up a bit more to decide whether or not to hold out for T3 or T4). 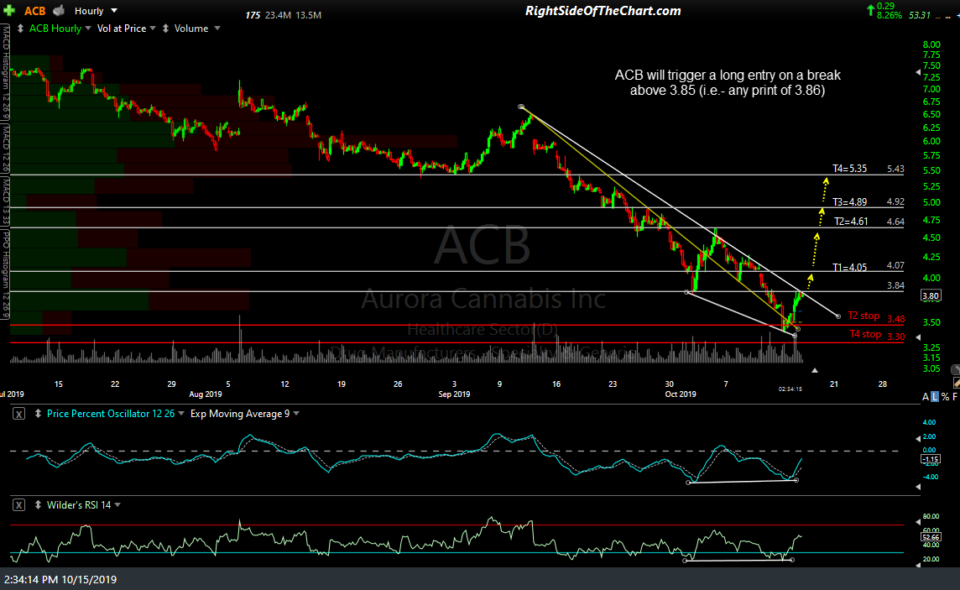 The suggested stop if targeting T2 is 3.48 with a suggested stop of 3.30 if holding out for T4. Due to the above-average gain & loss potential & extremely high volatility of this and most other cannabis stocks, the suggested beta-adjusted position size for this trade is 0.50 (or less, depending on one’s risk tolerance).

Thoughts regarding what? I do think ACB, as well as the cannabis sector as a whole, appears poised for a tradable counter-trend rally & they just need a little more upside to break above some resistance levels that would likely spark it. With ACB, I believe that level will be a move above 3.85 but ideally, you also want to see most of the other big cannabis stocks also breakout impulsively above their comparable resistance levels just overhead. You could certainly target 4.12 although that is just above the 4.07 resistance level in which I set the first target slightly… Read more »

ACB getting close to the buy trigger, trading at 3.84 right now with the MJ official trade setup just triggering an entry on a break above 20.00.

ACB just hit 3.86, triggering a buy signal/entry for the trade setup & as such, is now an Active Trade.

@rsotc Seems as though it’s struggling to maintain. Two back tests or creating a set of lower highs? https://www.tradingview.com/x/ovXJN5Po/

I have both ACB and CTST from this group of trade ideas my ACB is above water but my CTST is still just not seeing any love. My question is are these still viable and just require a bit more patience?

Looks to me that it’s going to right the minor uptrend line to the ER and then pick a direction. Could be lucrative if to the upside but 50/50 :/