While certainly a counter-trend & aggressive trade at this time, it appears that TVIX (2x short-term ETN) offers an objective long entry following the breakout & near-backtest of this 60-minute downtrend line & divergent low with either a partial or full position (add-on to a partial position would come with a sell signal on the US equity markets). 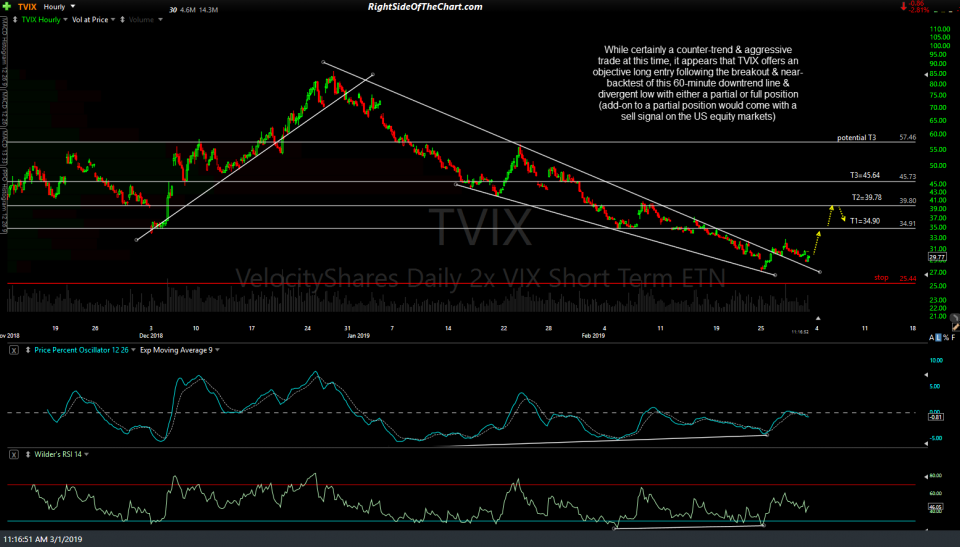 As such, TVIX will be added as an Active Long Swing Trade around current levels with the same price targets as the previous trade; T1 at 34.90, T2 at 39.78 & T3 at 45.64 with the potential for additional targets to be added, depending on how the charts develop. The suggested stop will be any move below 25.44 with a suggested beta-adjusted position size of 0.35 to account for the 2x leverage & above-average price swings in the $VIX and TVIX.

Although I had stated in the Midday Market Update video that was just published, as well as within the trading room earlier today, that I would like to see a red close today for the first potential sell signal on the equity markets, I am adding this trade in anticipation of a reversal for two reasons:

1) The charts of both TVIX & the $VIX look constructive enough on their own & there are times when the $VIX and short-term VIX futures (TVIX) will move higher despite the major stock indexes moving higher or trading sideways.

2) With the S&P 500 making its second failure at the key  2800-2815ish resistance zone this week & coupled with other factors that indicate the odds for what could prove to be a relatively swift correction are high, I’d rather be early than late on an entry or at least a starter position on TVIX, should the markets gap down over the next several trading sessions as that could mean a gap up of 10% or more in TVIX.

As always, pass on this trade if it does not mesh with your outlook for the market, your risk tolerance, trading style or comfort level. Also, remember to adjust your position size to account for the above average gain & loss potential on this trade. An icon linking to the RSOTC Trade Position Calculator has been added to the main menu at the top of the site.

How about now?
Tvix is go back to low level.

Hello, TVIX… we meet again. I hope to get the better of you this time ’round.