The tobacco stocks got smoked on Friday & member @stock51 in the trading room has asked me to take a look at the sector following last week’s carnage in many of those stocks to share my thoughts. Starting with the tobacco sector, we can see that the recent 13% correction was far from unexpected as the charts were clearly bearish. The tobacco sector printed a divergent high on the peak back in mid-June. Friday’s meltdown, although I’d imagine there was most likely a news and/or earnings-driven catalyst assigned to it, was also triggered by a significant technical catalyst; a breakdown below the primary uptrend line off the November 2016 lows. As of now, the tobacco sector sits just below a former support, now resistance level. As such, until & unless that level is clearly recovered, the near & intermediate-term outlook for the sector remains bearish. 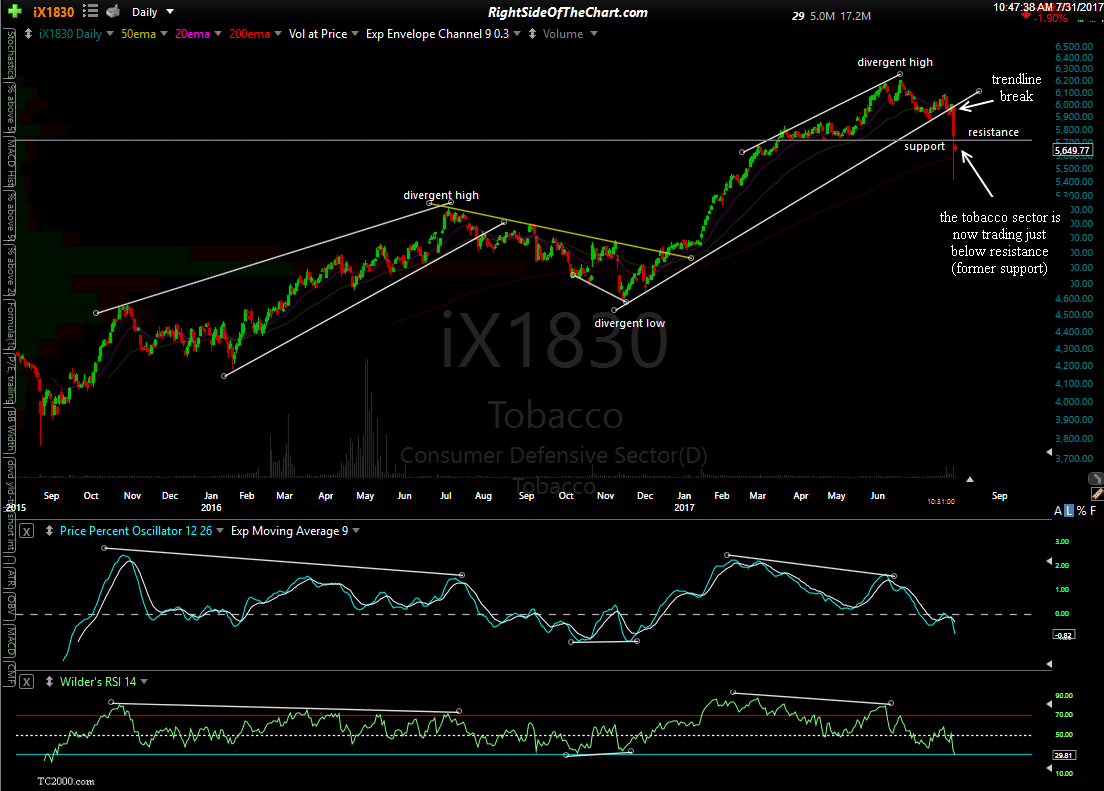 Taking a look at some of the largest tobacco companies, it appears that PM (Philip Morris International) likely has more downside in the coming months following the June 21st divergent high. Based on my projected scenario for the stock, it may be in the process of forming a Head & Shoulders topping pattern.

BTI (British American Tobacco, BAT) took it on the chin along with most of the tobacco stocks recently although not out of the blue as the downside was proceeded by clearly bearish technicals in those stocks.

MO (Altria Group Inc) made a perfect kiss of the former T1 support level (that line was set just above 60) on Friday’d carnage in the tobacco stocks & mounted a bounce from there but still printed a massive bearish engulfing candlestick. While the very near-term direction is unclear, the stock is likely to revist Friday’s lows in the coming weeks to months with any bounce back to the 697.30 and/or 69.80 resistance levels to offer objective short entries.

Although RAI (Reynolds American Inc) recently gained shareholder approval to be acquired by BAT (ticker BTI) & will trade around current levels until the acquisition is final, the charts were clearly indicating a drop of at least 12% before that news.

UVV (Universal Corp) has one of the better looking charts in the tobacco sector. Assuming that the S1 support level holds a breakout above these interesting downtrend line would provide an objective long entry. However, the success of that breakout will also largely depend on the technical posture of the tobacco sector at the time.

If you are wondering what caused the selloff on Friday, the FDA plans to lower the amount of nicotine in cigarettes, which should make them less addictive. https://www.fda.gov/NewsEvents/Newsroom/PressAnnouncements/ucm568923.htm

Thanks. Just from scope of the big selloffs on Friday, I figured it was most likely a news driven catalyst but as noted above, it was also a technical breakdown and the two are very often inter-related meaning that the technical setup is there & quite often, the breakdown (or breakout for a bullish chart formation) is triggered by a news/fundamental catalyst. Thanks for passing that along.

On a somewhat related note, I recently skimmed the headline of an article in which the gist of it was that India is pissed off at the U.S. tobacco industry for causing so many smoking addictions with all of the accompanying health issues. Most of us know that the biggest growth markets for the tobacco co’s have been the overseas markets once the FDA finally clamped down the vices here in the U.S. If I recall, that’s when & why Philip Morris split into 2 separate companies (MO & PM), one to focus on the U.S., with their strict regulations… Read more »