The Charts of RKDA & XENE Continue To Firm Up

The Charts of RKDA & XENE Continue To Firm Up

The technical posture & outlook for both RKDA (Arcadia Biosciences) & XENE (Xenon Pharmaceuticals) continues to firm up since both stocks were most recently highlighted in the Swing Trade Ideas video posted on Wednesday. RKDA has gained about 20% from where it was highlighted (just below the downtrend line) in that video just two days ago with the stock currently flirting with the 6.60ish resistance level. Arcadia went on to make a breakout & solid close above the downtrend line yesterday on above-average volume, which helps to confirm the breakout above the downtrend line & minimize the chances that the breakout will soon fail. Arcadia Biosciences may be added as an official trade soon with the following price targets that have been added to this updated daily chart although I am waiting to see how the stock handles this 6.60ish resistance level first & just wanted to pass these targets along for those that have already taken a position or plan to do so soon. 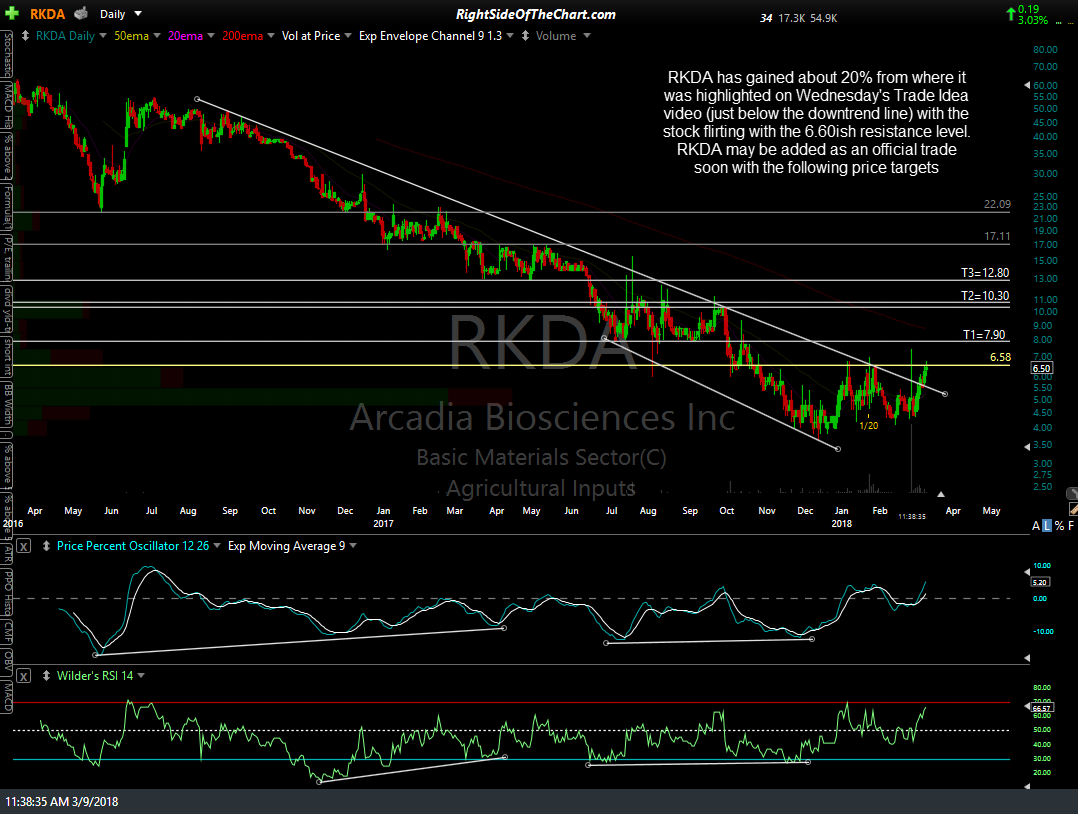 XENE, also covered in Wednesday’s video, is starting to move above the 4.40ish resistance level which could be the catalyst for a backfill of the large gap/thin zone overhead. As such, XENE is on watch as a potential official long swing trade entry targeting the 6.50ish area, about 40% higher. Once again, both of these potential setups should be considered aggressive trade ideas due to their volatile price history, including the potential for very large opening gaps, such as the ~50% gap down in XENE back in March 2017 & ~13% gap down in June 2017, par for the course when trading small biotech stocks.

RKDA took out the 6.60ish resistance level with conviction shortly after this post early today, exploding 38% higher since then to the 8.79 level so far before settling back on T1. More upside to come, I believe, but watching for an objective level to add it as an official trade as that rip was too fast to get a post out on time. Congrats to those that caught it or were already long.