I wasn’t aware until now that the suggested stop that I had just raised on Monday was hit yesterday or I would have added SOXS back as another short trade along with QQQ on the news-induced pop & stop-raid yesterday. As there is still enough meat left on the bone to all price targets, SOXS will be added back as another Short Swing Trade here around the 49.26 level. Same price targets, same (revised stop) and the same 0.35 beta-adjusted position size as the previous trade for those that didn’t allow for a wider stop in yesterday’s (so far, failed) attempt by Washington to foil the bearish technical posture of the stock market. 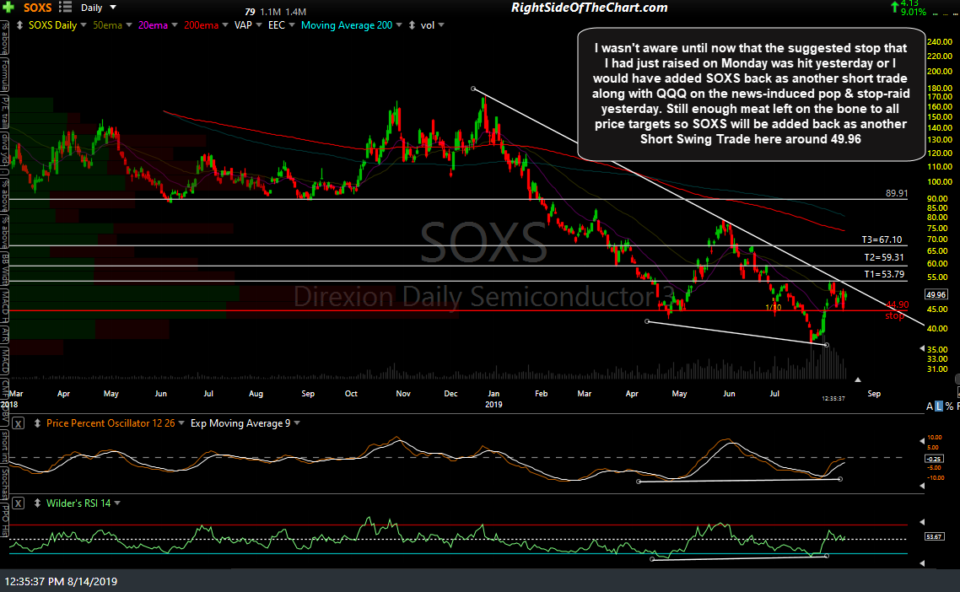 Typically, I will set alerts at the price target & suggested stops on the official trades but I hadn’t done so with SOXS. Also, I use the chart of SOXX for technical analysis when trading SOXS & SOXL, which was the chart I glanced at yesterday around the time I posted my first commentary yesterday after returning from an earlier appointment. This is not my ideal entry on SOXS but as with all trades, I am considering the risk (loss potential) vs. reward (gain potential) coupled with today’s price action in the broad market which helps to strengthen/confirm the case for more downside in major stock indices & semiconductor sector in the coming days to weeks. My apologies for any confusion or lack of updates on the semis yesterday as my focus was primarily on the major stock indexes in light of the big WH-induced rally coupled with an abbreviated workday for me.