The following Short Trade Ideas have either hit one or all of their price targets, exceeded their suggested stops and/or no longer look compelling from an R/R perspective. As such, these trades have been moved to the Completed Trades category, along with all associated posts for future reference:

ACN – After hitting the first price target for a quick 10.4% gain, ACN reversed shy of T2 & went on to exceed the last downward revised suggested stop of any move above 100.50.

AVGO- Hit T3 for a 20.5% gain, with that price target on the daily chart also coming in where the weekly downtrend line that I was targeting was hit. From there, the stock has drifted higher since, exceeding both the entry price & any reasonable stop or trailing stop.

BLK- A specific suggested stop level was not listed for the BLK short trade but the stock failed to reach any profit targets did go on take out what was described as “triple intersecting resistance levels just overhead; the 200-day ema, the downtrend line off the late April highs as well as a decent horizontal resistance level around 334.50.” 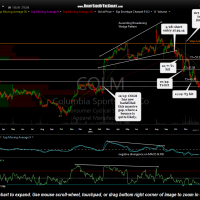 COLM- This was a tricky one. COLM was listed with a final target, T3, at 46.20 & a suggested stop over 63.80. COLM very quickly dropped, hitting T1 for a quick 6.1% gain, found support at that level for a week or so, then fell sharply & hit T2 for a 13.6% gain the same day the T1 support level gave way. From there, the stock gapped up on an earnings-induced order imbalance very briefly above the suggested stop level before the gap was immediately faded, with the stock going on to hit the final target, T3 at 46.20, for a 22% gain. I often suggest to pull stops when a stock is poised to gap up or down on earnings, waiting about 30-60 minutes after the open to allow the order imbalances to clear before adding back a stop-loss order but as I didn’t not mention that in this case, COLM should have been considered stopped out on that Oct 30th gap & moved to the Completed Trades, with T2 as the maximum price target hit. On a side-note, COLM has now backfilled the massive Feb 12-13th gap, where the odds for at least a minor bounce are quite elevated.

DUST/GDX- The last DUST long/GDX short from October that was based off the intraday charts hit at least one of the profit targets where I had stated exiting the position & then listed a revised suggested stop which would assure a profit on the trade (which was hit shortly afterwards).

FAS/XLF- FAS reversed just shy of the 22.95 support level after breaking below the triangle pattern & exceeded the suggested stop of any move over 29.15 on Oct 20th. 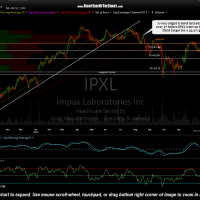 FNHC- Fell to within 3% of the first price target before reversing and going on to exceed the suggested stop above 26.50 on Oct 12th.

IPXL- Similar to COLM & one reason I’ve been moving towards using end-0f-day closing values for stop parameters on trades based off the daily time frame. IPXL made a very brief intraday move over the 27.00 suggested stop level & as such, will be considered stopped out for a loss. However, for those that allowed a slight overshoot or wider stops, from there, IPXL went on to hit all three price targets, reversing at T3 for a 23.2% from entry.

NBIX- Yet another one that barely & only briefly exceeded the suggested stop (56.20) on a intraday basis before falling to within mere basis points of the first target for what would have been a 45% gain. NBIX was pointed out as hitting the highlighted 38.77 previous target/support for a 21.5% before bouncing but with the official stop being slightly clipped, NBIX will be considered stopped out for a loss & moved to the Completed Trades category.

ROST- Hit the final target, T3 (which was originally 89.60 before the 2:1 stock split on June 12, which put the final target at 44.80). That final target was hit for a 13.3% gain on Nov 13th, the very day the stock bottom & began a sharp reversal, rallying over 27% in just over a month since then, as is often the case when the final price targets are hit.