I tried last night to get an update on the equity markets as well as the PAYX Short Swing Trade idea, which triggered a short entry yesterday but learned the hard way that “wifi access” in the Costa Rican rain forest isn’t exactly the same as a high-speed or even a stable internet connection. After a 12+ hour day of traveling, I had to give up after constant dropped connections & late 90’s AOL dial-up speed (at best, when it worked) with cellular reception not any better.

Hopefully that will change later this week we head out of the mountains & down to the coast so until then, here’s a quick update on the PAYX short trade, which triggered an entry yesterday on a break below 85.99 with the first chart a screenshot taken after yesterday’s close followed by today’s end-of-day chart. 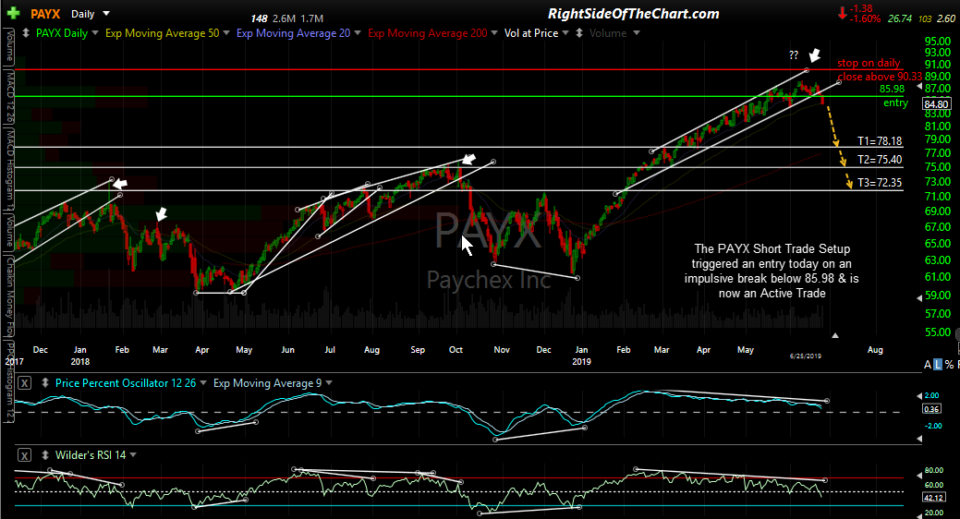 As has been the pattern in the past, PAYX continues to move impulsive lower following yesterday’s breakdown with the earnings disappointment already indicated in the charts before today’s report. The impulsive selling since the breakdown increases the odds that T1 will be hit in the coming days to weeks.

Thx, fixed it. Very much so.

Enjoy the vacay CR is a fun place.

I got into some puts when I saw the break below $86. Made a quick 39% gain. Thanks for the tip – enjoy the vacation