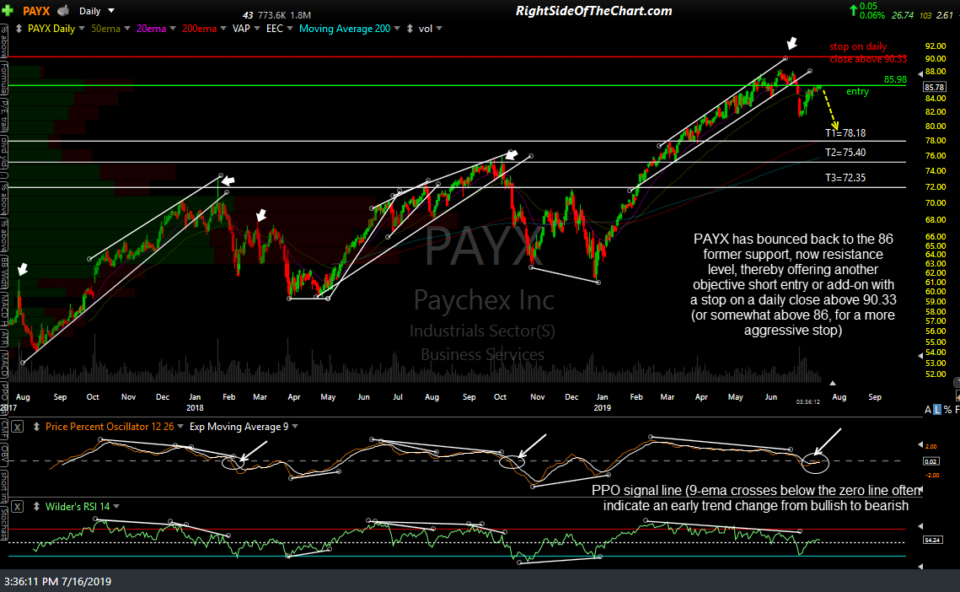 Also, note the current posture of the PPO signal line (9-ema) which made a bearish cross down below the zero line recently & remains below for now. PPO signal line (9-ema crosses below the zero line often indicate an early trend change from bullish to bearish as was the case shortly after the previous two major sell signals/uptrend line breaks & divergent highs back in 2018 & 2017 as shown on the chart above.

As with any trade, this one will either pan out or not… it’s really that simple. However, nothing that I see in the charts at this time convince me to modify the trading plan on PAYX although ideally, the stock should start to move lower now that the 86 level has been backtested. I will also add that while this appears to be another objective shorting opp (which is also just below the original entry of 85.98), I would not add to or initiate a short position on PAYX above 86, only below that level.

Hi
what uncanny timing , as I was just looking at this and wondering about the addition to trade and backtest ! Thanks… missed the regular business hours though

Still looks like an objective short today with PAYX opening flattish & even going slightly positive earlier & only down -0.25% now. If it takes out yesterday’s low, all the better & ideally the stock should start to build momentum to the downside if rejected on this backtest. G-luck if you take it.

Hi you covered CGC earlier , looking at today’s price action , can we say the bottom is in for near term?

To keep the comments below each post related to the security or securities covered, please post any update or charts requests for non-related stocks such as CGC within the trading room. Thanks.

Hey Randy. This hard bounce off that 86 level on Friday looks pretty telling. Does this confirm the downside move even more so to you now? Thanks

I have the same question on PAYX short