so far (thankfully) OSUR is playing out as i had hoped for with about 1/2 of today’s news induced gains being faded.  although this trade is still underwater, it is now a lot closer to break-even and although it’s way to early to say with any degree of certainty, this trade could possible still play out to be profitable and hit one of the previous targets, especially if my earlier suspicions that an FDA approval (which BTW, the FDA panel voted 17-0 for approval) was already priced in.  regardless of any “guesses” as to the outstanding supply (sellers) vs. demand (buyers) on the stock, from a technical perspective, i think it would be prudent to lower my stop on the stock from above today’s highs down to slightly above the horizontal resistance level shown on the 4 hour chart below (11.61), probably not much higher than the 11.70 level.  a look at 5 minute chart below helps confirm my suspicions as there has been an overwhelming amount of selling vs. buying immediately following the gap up today (buy the rumor, sell the news).  again, way too early to declare victory but i think this is a good example of how not to panic when a position that you own makes a large news-induced gap but to step back and analyze the stock from a technical perspective while factoring in the fundamentals.  had this chart been inverted (a long drop down to or near new all-time lows) and this FDA approval was unexpected, that would most likely be a reason to cover the short and take your losses as soon as possible, as the stock would most likely continue to attract new buyers. 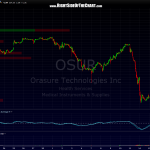 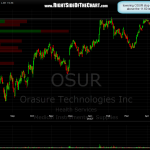