As we head into the final trading day of the week, I wanted to clean up the trade ideas as there were two swing trades that were stopped out last Friday, GDX & SXE. Both were mentioned as exceeding their suggested stop in the trading room and/or in recent videos but I wanted to post an official final update on those trades as well as an update on GDX, which is currently under consideration as another swing trade candidate.

SXE (Southcross Energy Partners LP) was posted as a trade setup on July 18th with an entry to be triggered on a break above 1.65, ideally on above-average volume (1.5x or greater 60-100 day avg. vol.) as that helps to confirm a breakout & decrease the chances that a breakout will fail. The stock went on to breakout above the 1.65 level later that day although without very impulsive volume.

In the trade ideas update video the following day, I had stated my concerns about the lack of volume confirmation as well as the fact that the breakout had failed & stated that it would not be prudent take the trade at that point for those that hadn’t done so already (video excerpt here).  Regardless, as the entry price was triggered, this was considered an Active Trade.

From there, the stock traded sideways for about a week, followed by a large gap down due to headlines from a canceled pending merger. The stock gapped down to open at 1.25, moving lower throughout the day to close at 0.78, which is where I will consider the trade stopped out for tracking purposes which would result in a 53% net loss or 37% beta-adjust loss (as the suggested beta-adjusted position size for this aggressive trade was 0.70). 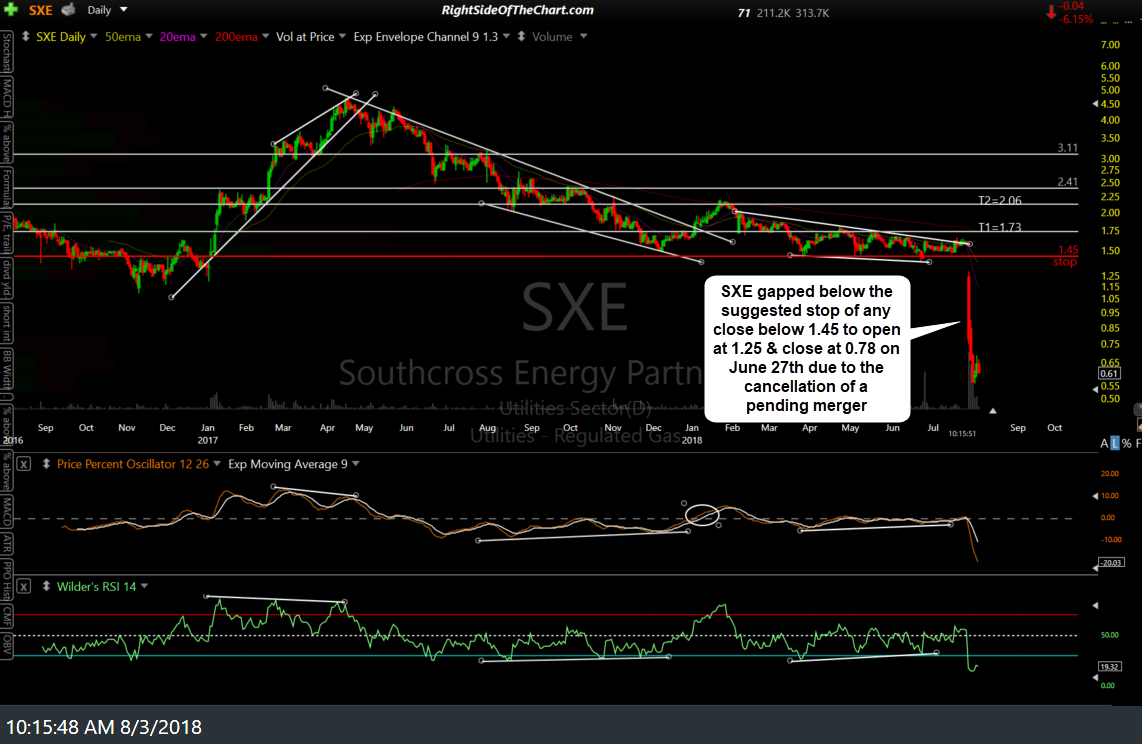 GDX (gold miners ETF) was added as an Active Long Swing Trade on July 25th, rallying up to R1 (1st resistance level) from there but reversed off R1 & fell below the suggested stop of a close below 21.35 to close at 21.32 that day, accounting for a net loss of 1.2% or a beta-adjusted loss (based on the reduced beta-adjusted position size of 0.70) of only 0.8%. 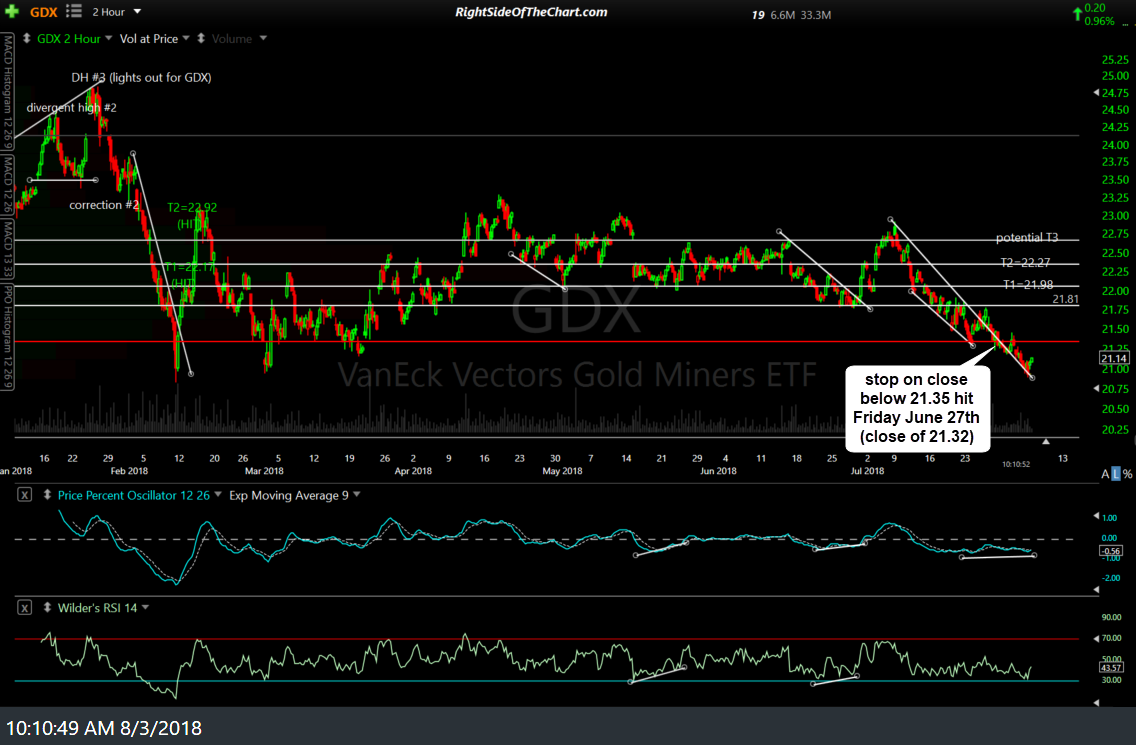 Since that breakout & subsequent move lower, GDX has been backtesting the downtrend line from below & even more importantly, GDX has now fallen to the extremely well-defined & technically significant 21ish support level which has contained every pullback, over a half dozen, since the gold mining sector bottomed back in December 2016. As such, GDX will be added back as another active trade here at current level with additional charts, including price targets & a suggested stop, to follow. Once again, the suggested beta-adjusted position size for GDX, due to the volatile nature of the gold mining sector, is 0.70. 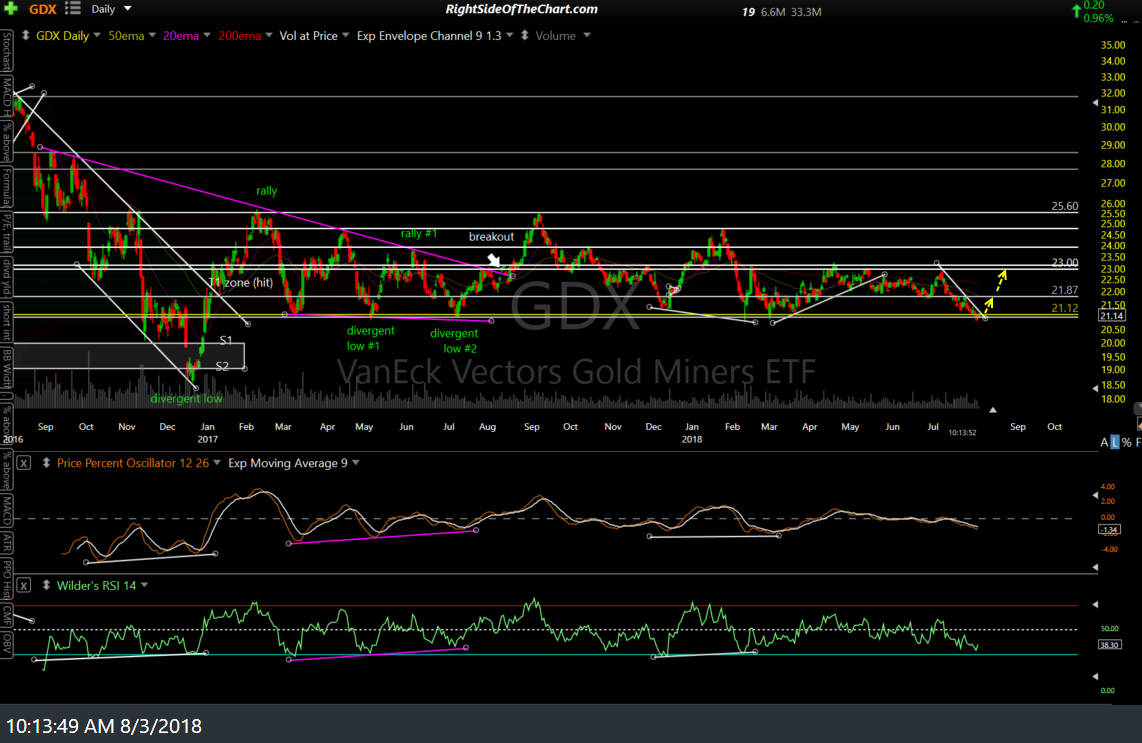