GBTC (Bitcoin Trust) will be added as an Active Long Swing Trade around current levels as it hit the downside target on my daily chart (support) with potential bullish divergences forming on this 60m chart. 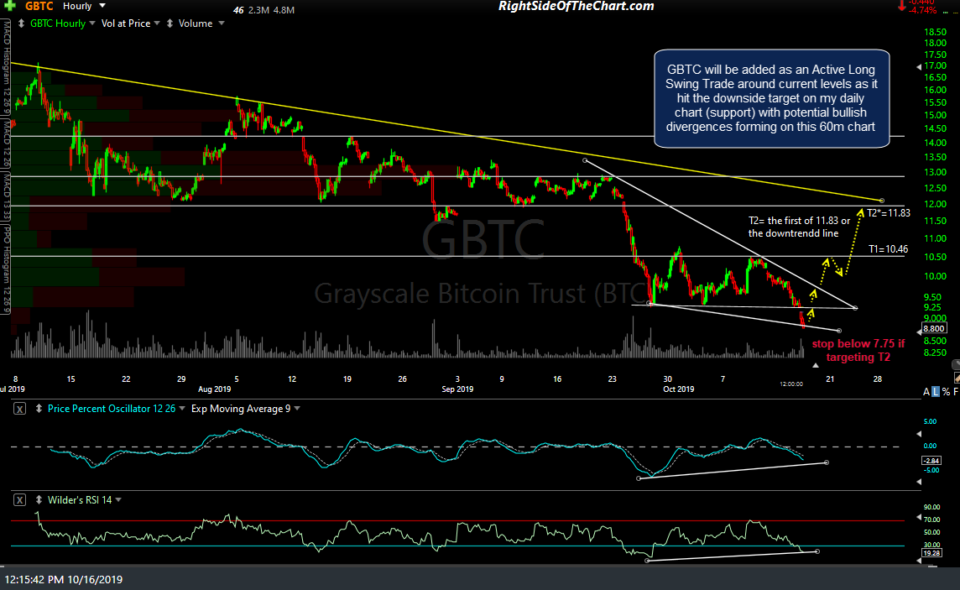 GBTC has just hit my 8.82 price target from the August 30th post “Is Bitcoin About To Drop 25%?” in which the case was made for, well, a 25% drop in Bitcoin. Actually, I’ve been calling for a drop to the 8.82 level since this ‘Bitcoin “Return To Normal” Rally Likely Over’ post all the way back on July 18th except back in July (as the first chart below shows), I was calling for one more leg up before the drop down to 8.82, which is pretty much exactly what happened since then.

With GBTC now trading at that key support level while oversold on the daily timeframe along with the potential (but not yet confirmed) positive divergence on the 60-minute time frame, GBTC offers an objective yet fairly aggressive entry as Bitcoin is solidly entrenched in a downtrend/bear market with absolutely zero buy signals at this time. As such, one should pass if this aggressive “trying-to-catch-a-falling-knife” type trade does not mesh with their trading style and/or risk tolerance.

The price targets are T1 at 10.46 & T2 at the first of the yellow downtrend line or the 11.83 level. The suggested stop is any move below 7.75 if targeting T2 (higher, if planning to book partial or full profits at T1). Due to the aggressive nature of this counter-trend trade coupled with the very high-volatility & above-average gain/loss potential for this trade, the suggested beta-adjusted position size is 0.65.

Hi Randy, I sent you an email to support yesterday. When you have some time, check it out please :)

Will do. I’m behind on emails from the contact form/support but will take a look asap today.

Hello, I have TD Ameritrade and was trying to short this trade back when you had originally posted the 23% drop post. I was having trouble finding a way to short it with TD. GBTC doesn’t have options available through TD at lest. The futures requires some special whoops to be able to trade it and there is no mini or micro version so the barrier to entry on it is pretty high.

Do you have suggestions on how to short bitcoin not using the future?

True. The margin requirement for shorting /BRR Bitcoin futures is insanely high so a big capital burner and most brokers don’t readily have shares of HTB (hard-to-borrow) stocks & ETP’s such as GBTC (although Interactive Brokers has the best availability of HTB shares of any broker) which can make shorting Bitcoin tough.

If either of those two options above aren’t available to you then you might opt to short a Bitcoin proxy such as OSTK or RIOT as they tend to ebb & flow with the price of Bitcoin.