The following stocks are covered in this order: SQM, MEOH, EMN, FF, RYAM, VHI, HUN & APD (plus the static charts of LXU below)

LXU was one of 9 stocks in the chemicals sector that stood out when I went through all of the components but it appears that I had inadvertently skipped over it in the video so I’ve included the daily & weekly charts, along with some key levels, below. Arrow breaks mark potential targets/resistance levels on this daily chart of LXU with a buy signal to come on a solid break & close above 3.30 & then the downtrend line. 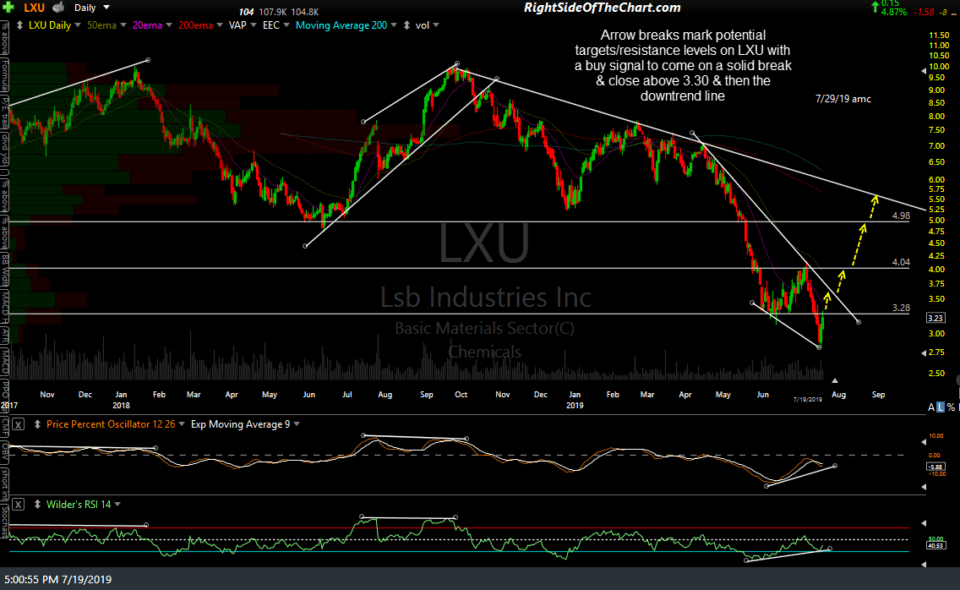 LXU had a waterfall sell-off once it broke below this weekly triangle pattern & the primary trend is clearly bearish with the near-term trend currently bullish. While the case for a potential rally can be made should it trigger a buy signal on the daily chart, it should also be noted that the stock appears to have recently broken down from a bear flag continuation pattern on this weekly chart. LXU is scheduled to report earnings on July 29th, after the market close (AMC). 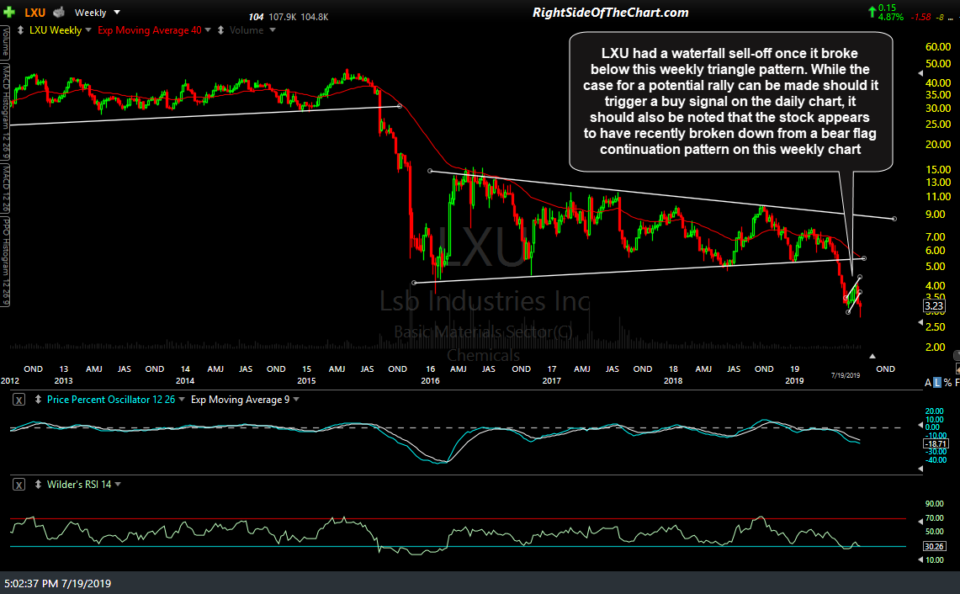 Not sure if there is a $DJUS… chemical sector but if so, stockcharts.com will probably show it under their symbol search function, as they use the $DJUS… indexes & sectors. On my TC2000 charting platform (or their free version, freestockcharts.com), you can use IGX1030, iGX1030, iX1040 (specialty chemicals), MG110, MG111 (Major Diversified Chemicals), MG113 (Agricultural Chemicals) or MG114 (Speciality Chemicals).

RYAM good watch weekly…DeMark almst telling me to wait until 9, but it is on 1-4 candle correction with 4 coming up. Divergences make me thing it might not turn to the 9. Will wait for PPO to start twist
https://www.tradingview.com/x/q38as11f/

Hi
These are not official trades yet correct ? Does one wait to get that official ?

Correct, not official trades. Those will always include specific entry levels, price targets, suggested stop(s) and suggested beta-adjusted position size. What I do quite often when I find a sector that may either be offering actionable (i.e.- now) trade ideas or a sector that appears to be setting up for a potential move but may need some more work to firm up the bullish or bearish case, is I will do a video covering the sector and any components within the sector that stand out. In the case of the chemical stocks, many of those stocks have the potential to… Read more »