The charts of /BRR (Bitcoin futures) and GBTC (Bitcoin Trust) continue to firm up as do the charts of the other two recently highlighted indirect Bitcoin proxies, OSTK (Overstock.com) and RIOT (Riot Blockchain). I also wanted to pass along another indirect trading proxy that also looks to be setting up for a swing or trend -tradable trend, MGI (MoneyGram International). Props to member @worknfish11 for bringing MGI to my attention.

According to @worknfish11, MGI uses XRP (Ripple), another popular & widely-used cryptocurrency to move funds across borders. With a quick web search, I came across this recent article stating that Ripple had invested $30m in the money transfer company back in June & plans to invest another $20m to bring its stake in MoneyGram to 9.95% with the option to increase its stake to 15%. As always, I would encourage anyone interested in this trade idea to do their own due diligence from a fundamental perspective as well as share any other crypto-related trade ideas in the comment section below this post. MGI appears poised to trigger an objective long entry on a breakout above the bullish falling wedge pattern on this daily chart with the unadjusted* price targets shown. 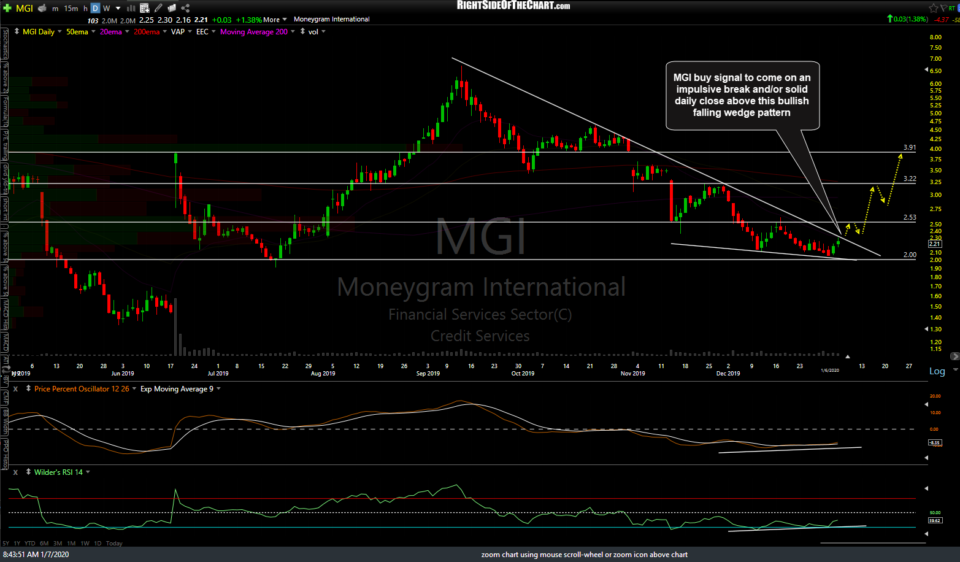 As mentioned in yesterday’s update on the GBTC official trade, OSTK had triggered the second buy trigger on a break above 7.16 yesterday, followed by impulsive buying (which is ideally what you want to see on a breakout) and the stock closing +13.73% on the day. I’ve added an additional resistance level at 8.97 on the updated daily chart below just shy of the previous first target of 9.19, to form a ‘resistance zone’ which is likely to cause a reaction on the initial tag. 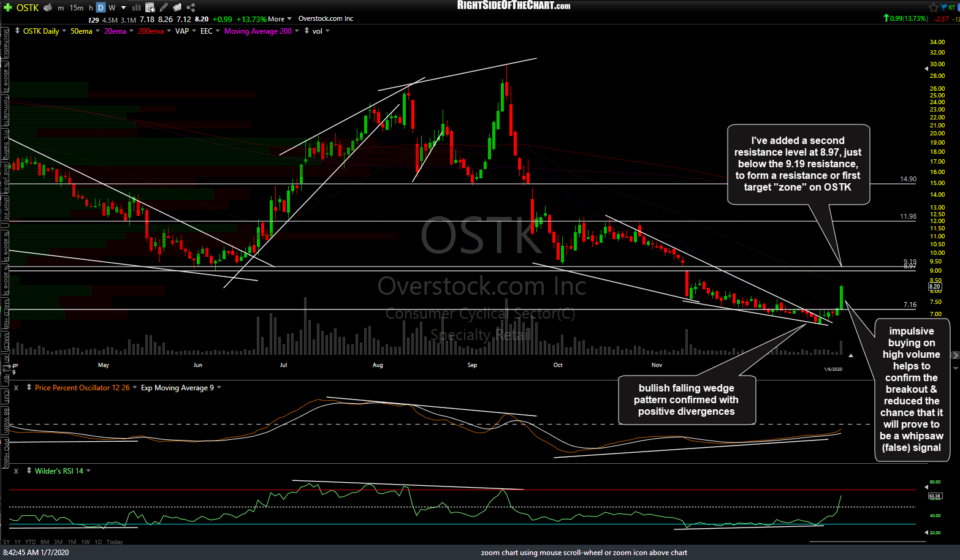 We also had the first buy signal triggered yesterday on the impulsive breakout (+10% on high-volume) on RIOT with the next objective long entry or add-on to come on a solid break and/or close above the 1.30 resistance level. Current price targets (unadjusted, best to set your sell limit order just shy of the resistance level(s) you are targeting) are 1.81 & 2.45. Keep in mind that RIOT is a low-priced, very volatile & aggressive trade so best to keep the position size relatively small in order to account for the above-average gain & loss potential. 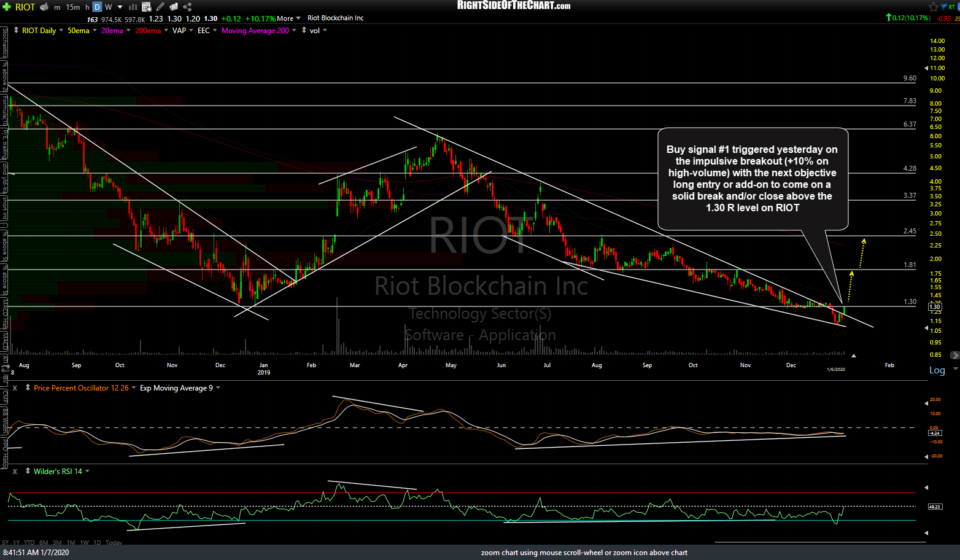 As the outlook for the Bitcoin proxies above hinge largely on where Bitcoin goes from here, I’ve included the daily charts, along with price targets, for both /BRR (Bitcoin futures) and GBTC (Bitcoin Trust, similar to an ETF tracking Bitcoin prices), below. Keep in mind that the official trade on GBTC, including the price targets, is based off the 60-minute chart. 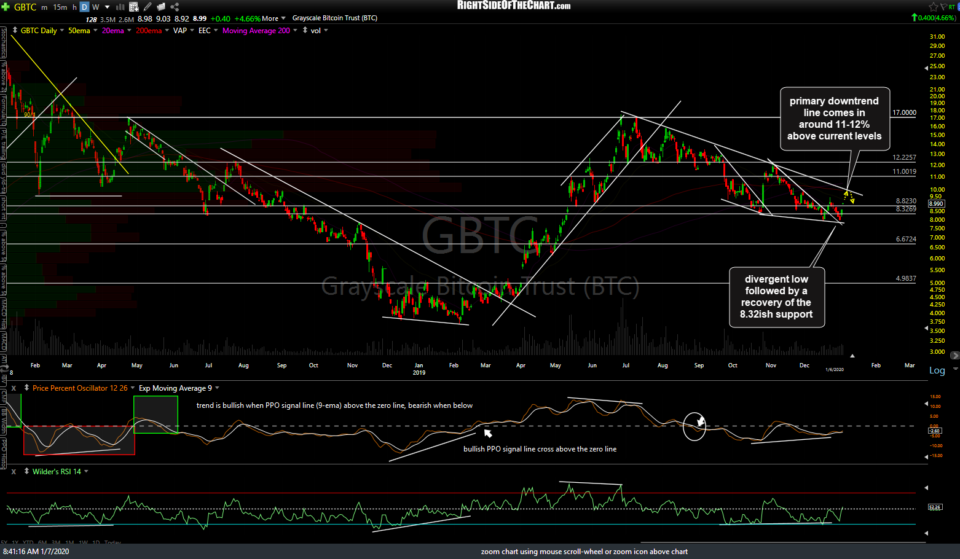 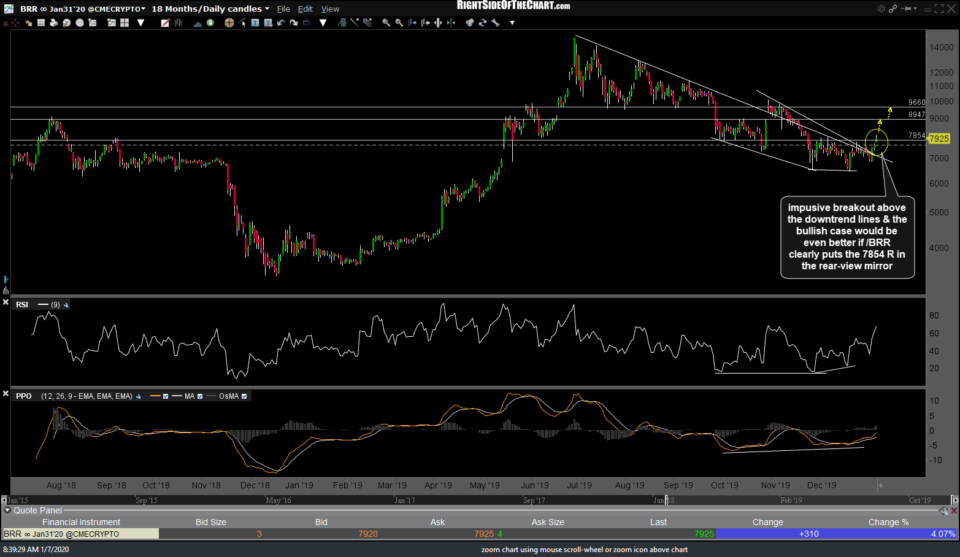