I had planned to post a bunch of trade updates this morning but ended up at Home Depot buying, then replacing a broken light fixture in my office.  I avoided electrocution & I’m finally on-line so here’s the first of the trade updates.  I’m going to focus on the few remaining active long trades first which brings me to AMKR.

AMKR was originally posted when breaking out on Jan 8th but I suspected that breakout would fail, which it did, and that it would provide a more objective entry on a pullback to within the wedge.  As the previous chart (2nd below) shows, that is exactly what happened and then AMKR went on to come within 6 cents of the first profit target for about a 11% gain from the entry.  For anyone still in the trade, the stock is now back close to entry while making a backtest of the pattern from above.  I’ve drawn in two support levels which would make ideal stops if prices continue much lower (which level would depend on your specific entry price and typical stop allowance and as always, these are just general suggestions).  This trade will be considered stopped out on any move below 4.40.  AMKR daily charts in order as posted, with today’s updated chart last.

For those setup to automatically receive notifications of new posts via email, please note that as I plan to update numerous charts today, I will be suppressing the email feature as to avoid overwhelming your inbox with trade updates that you may not be interested in.  If you do currently hold any active trades, I would suggest checking the site throughout the day.  For quick reference, an email notification summarizing all of the trade updates will be sent out later today. 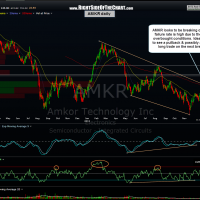 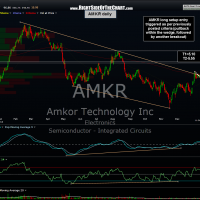 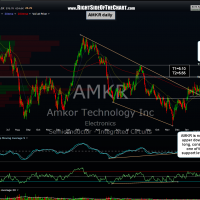