The ‘potential’ bullish divergences that were highlighted on the 60-minute chart of /CL (crude futures) yesterday have now been confirmed via a bullish crossover on the PPO which has put in a higher low on that indicator as well as the RSI. Barring a sharp reversal over the next couple of hours, the potential divergence that USO had at yesterday’s close on the 60-minute chart will likely be confirmed at the open today as well As such, this increases the odds of a counter-trend rally until & unless these divergences are negated, or taken out soon. 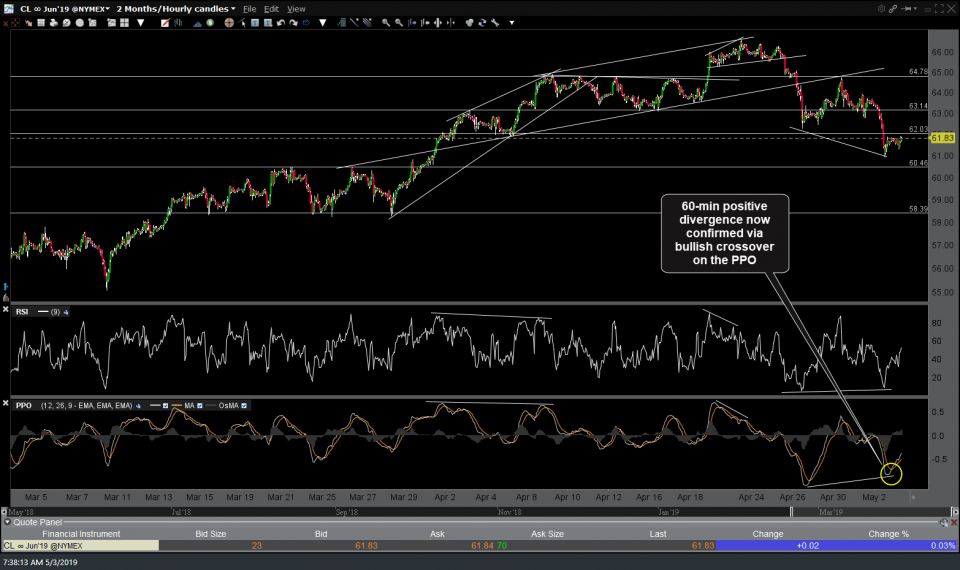 The breakdown below the primary uptrend lines off the Dec 24th lows in both USO & /CL, as well as the subsequent selling, were very impulsive and as such, my expectation is that whether or not these divergences play out for a tradable about, there will likely be more downside in crude in the coming days to weeks with the 2nd & 3rd price targets being hit with USO remaining below the suggested stop of 13.82. My plan is to lower the suggested stop to the entry price (13.29) if & when T2 is hit but as always, it is up to each trader to decide if they want to lower their stops after T1 was hit yesterday.

I’ve added a few overhead resistance levels with yellow lines on the USO 60-minute chart which could come into play to cap any snapback rally while the green line (T1) is former support that could also act as resistance if tested from below.