UGAZ (3x Long/Bullish Natural Gas ETN) is under consideration to be added as an Active Long Swing Trade, quite likely shortly after the regular session opens for trading today. I wanted to get the chart out in advance for those interested or already in a nat gas position via /NG (future), /QG (Miny futures contract), UGAZ, UNG or any other natural gas trading proxies. 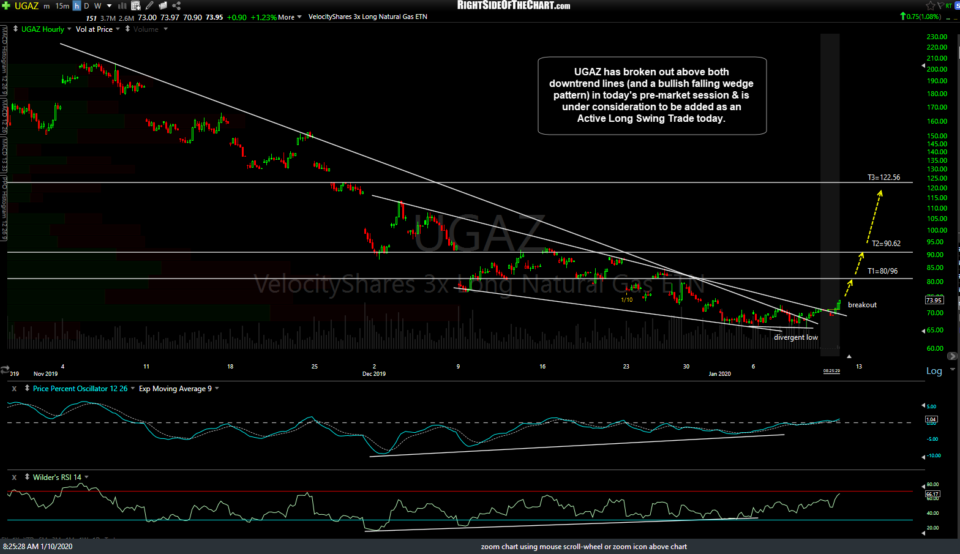 The price targets are shown on the 60-minute chart above and as I’ve always included only regular session trades for the entries & exits on the official trade ideas in the past, I’ll follow up with a suggested stop when/if I make UGAZ an official trade based on the entry price at the time. Due to the 300% leverage & volatility of nat gas, the suggested beta-adjusted position size for this trade will be 0.25 – 0.30.

In recent years, I’ve highlighted a fairly consistent pattern of natural gas prices rally around year-end followed by equally sharp or greater corrections shortly before or after the new year. While it is possible the New Year rally came earlier than usual in late 2019, a decent case can still be made on the longer-term charts of nat gas that the New Year’s rally is still yet to come & may be getting underway soon, if not already.

@rsotc Good morning Randy. any chance you can post a /NG Chart with targets please ? thanks

Sure. Here’s my /NG 60-minute chart with some near-term targets. It’s the same 60m chart I’ve been highlighting in recent videos although I modified that larger downtrend line off the early Nov highs which now comes in that same first target zone that runs from above 2.263-2.280.
The odds for a reaction if/when those intersecting resistance levels are hit are decent, followed by another leg up to the 2.386ish resistance/target. If & when /NG starts to approach 2.386, I will assess the charts at the time to determine if additional upside is likely.

Note that /NG is currently trading at the top of that ascending price channel that I’ve highlighted in recent videos. While it could punch up through the top to the channel & run towards that first target, the odds for another reaction here off the top of the channel are decent as well. As such, I’d like to see how nat gas & UGAZ trade after the open today before adding UGAZ as an Active Trade (still a Trade Setup for now).

Randy, Thanks for the chart and your thoughtful input…. seem like NG managed to punch through and ended up right on top of the price channel at the close. it looks good. but… knowing how NG can be a wild ride … one minute it give hope and then snatch it away in an instant to inflict pain….. i’ll wait to hear from you before adding to my existing position that kept me awake some nights. Thanks again and have a great weekend .