TSCO (Tractor Supply Co.) has fallen to long-term support on the weekly chart within a bullish falling wedge pattern on this daily time frame. With resistance around 52.60 coming in with the downtrend at this time, TSCO will trigger a long entry* on a move above 52.70. The technical posture of the stock on the weekly chart helps to indicate the likelihood of a bottom soon along with the potential for a considerable rally up to at least the 61.25ish area going forward & possibly the 76 area over time. As such, this will be added as a trade setup in both the Swing Trade category as well as the Long-term Trades category. Props to @murphydoc for mentioning TSCO in the trading room. 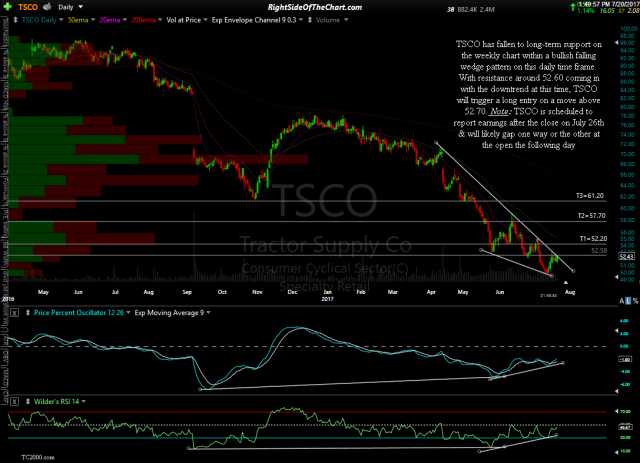 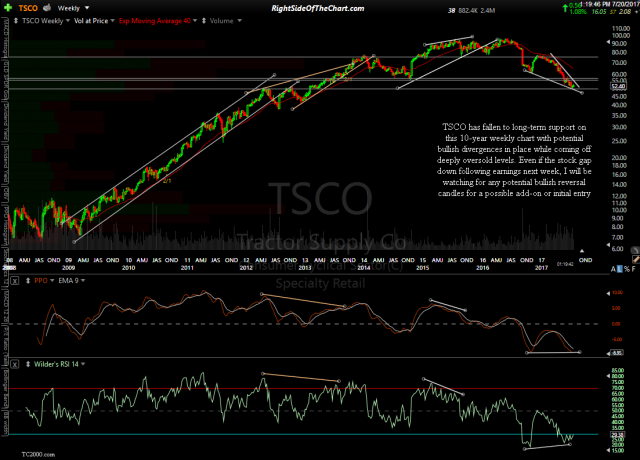 *Note: TSCO is scheduled to report earnings after the close on July 26th & will likely gap one way or the other at the open the following day. Each trader or investor must decide whether to establish a position shortly before an earnings report or hold off until after the company has reported & issued any forward guidance. I recently posted these statistics regarding earnings season (which has recently kicked off) regarding the performance of both the stock market as well as several market leading stocks. I also shared my thoughts along with some factors to consider with your positions leading up to their quarterly earnings report.

It has been my experience that more often than not, if a stock has a clearly bullish or bearish technical posture heading into earnings, the subsequent move in the stock will be in the direction indicated by the technicals (i.e.- bullish chart pattern = a rally following earnings). Remember, more often than not is far from always and a lousy or rosy earning report and/or forward guidance can topple the most bullish or bearish of chart patterns. With that being said, the case for a meaningful trend reversal & rally in TSCO appears solid enough that I wanted to share this trade setup in advance of earning for those interested as the stock could gap up well beyond the pattern following the report next week. If that did occur on a very large opening gap, the stock might not offer an objective entry.