I have not had the time to put together the video update for the long trade ideas as I had planned.  My wife is traveling and I have a sick child home today & have been out most of the day at the pediatrician’s office & need to run out again to fill a prescription.  If possible, I will try to get that video out later today but just in case, I wanted to update the NLY Growth & Income Trade.  The detailed notes are annotated on the daily & weekly charts below but basically, I plan to leave NLY (Annaly Capital Mgmt) on as both an Active Growth & Income Trade (a sub-category of the Long-Term Trade Ideas) as well as a typical Active Long Trade (a typical swing trade).  NLY will also be added back as a Long-term Trade Setup as the stock looks to offer an objective new entry or add-on around current levels.

As the notes & scenario shown on the daily chart indicate, I could see some slight additional downside in the stock as it current sits just above a key weekly support level (10.50ish).  Such a move lower would put in place solid positive divergences on the daily MACD & RSI, increasing the odds that the stock is in the latter stages of a lasting bottoming process.  As stated on the weekly chart, any solidly weekly close (especially two consecutive weekly closes) below support would be a bearish technical event and likely portend significant additional downside in the stock.

The current/previous NLY long trade was added just 5 cents above the multi-year low on the stock the day it bottomed back on Aug 19th.  My suggestion was to book partial profits when T2 was hit for a quick 14.7% while adjusting stops higher to protect profits (while long-term/trend traders/investors could give the stock some more room, hence the reason it has & will remain an Active Trade).  For new long entries or add-ons to an existing position, a scale-in strategy might work well assuming the stock takes a few week to months to pound out a bottom around current levels.  Stops should be set based on one’s average cost but again, any solid weekly close would be a bearish event while intra-week breaks below long-term support (to run the stops) are somewhat common but at times, are not immediately followed by a sharp reversal & weekly close back above support but are followed up with impulsive selling instead.  Bottom line: Make sure to use the appropriate position size and stop(s) commensurate with your unique trading style and risk tolerance if trading/investing in NLY. 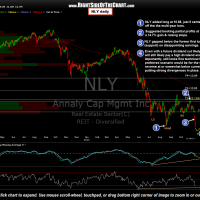 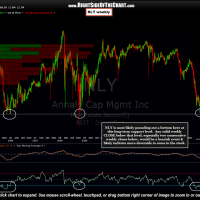