The day before Thanksgiving, an update was made to the NLY (Annaly Capital Mgmt Inc) Growth & Income Trade.  As the stock was poised to likely print a second consecutive weekly close below the 10.50ish weekly support (the initial suggested stop criteria), I wanted to highlight some potentially bullish developments on the charts before I left town for the holiday for those who might want to give their position a little more room.  Since then, the stock did go on to break above the highlighted downtrend line, make a successful backtest and has begun to move impulsively higher over the last couple of trading sessions.  In addition to the price breakout, we also now have the confirmed bullish crossover on the MACD that I was looking for as confirmation to the positive divergence that was forming on the MACD.

Therefore, NLY still remains an active Growth & Income Trade idea and with a current dividend yield of approximately 14% in addition to a 20% price appreciation if the current (revised) 2nd price target is hit, this mREIT looks to offer a very attractive R/R as a long-term swing trade opportunity with a stop below the 9.65 area (or higher, based on one’s average cost and trading style).  For simplicity, I have updated the price targets to reflect an entry or add-on based on the most recent post.

NLY was originally posted as a long entry at a price 0f 10.68 back on Aug 19th and went on to gap above the 2nd price target of 12.12 for a 14.7% gain (at which point it was suggested to book partial profits and/or raise stops).  This most recent move below that key long-term support level could very well prove to be a final stage flush out move providing a lasting base from which to launch a more sustain, healthy advance in NLY.  Maybe, maybe not so make sure to set stops commensurate with your own risk tolerance/trading style if you already own or decide to take this trade.  I continue to prefer a scale-in strategy with most of the Growth & Income and commodity related trade ideas as these are bottoming plays.  Previous & updated daily charts shown below.  Click here to view the live, annotated daily chart of NLY. 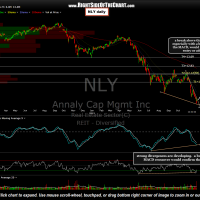 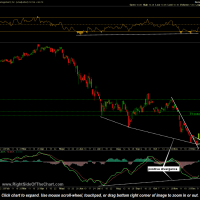