The US equity markets continue to move sideways within the trading ranges that have formed over the last several months but it is worth noting that the SPY ($SPX) is now sitting precarious close to the bottom of its 3 month trading range which runs from about 198 up to 209. The QQQ ($NDX) although trading lower today, is still slightly above its similar trading range, albeit, by a slightly larger margin the the SPY. Both trading ranges as well as several other technical developments on various time frames where discussed in detail in the U.S. Equity Market Overview video published yesterday. 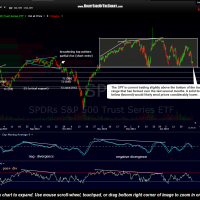 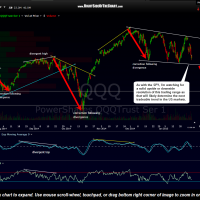 On a related note, a fairly comprehensive video covering the precious metals & mining sector was also published yesterday in which I communicated the fact that based on my latest analysis of the charts, I had decided not to add back any exposure to the mining sector following the recent successful DUST long/GDX short pullback trade, which was previously my plan. A case was made that we were more likely to see additional downside in the precious metals and mining sector, which so far is clearly the case today.

As I have very few trading positions at this time and do not see many attractive trade opportunities (although a break below the SPY & QQQ trading ranges could quickly change that), trade ideas & market updates will probably remain on the light-side throughout the week. As such, take some time to review the two videos posted yesterday and as always, feel free to share any feedback, comments or trade ideas via the contact form which can be found under the “Resources” tab on the top menu of the site.

In doing some housekeeping items, I have updated the Long Trade Ideas category today. The following long trade ideas have either hit one or more profit targets, exceeded their most recent suggested stop, or both. As such, these trades will now be moved to the Completed Trades category where all associated commentary & charts will be archived for future reference:

CORN: On Jan 5th, after CORN had already hit & exceeded the second of three profit targets, it was pointed out that a bearish rising wedge pattern had developed. It was suggested at that time to either book profits or raise stops and that CORN would be considered stopped out if/when price broke down below the wedge pattern, which they did just a few trading sessions later.

PPLT: PPLT (Platinum ETF) hit the sole swing target of 124.19 (T1) on Jan 20th. PPLT still holds potential as a long-term trend trade or investment but the previous trade setup was only intended as a typical swing trade.

PT: Stopped out yesterday as per the suggested criteria (SOAPSC) of any move below 0.84.

SOYB: (Soybean ETF), Hit T2 back on Oct 11th for a 13% gain. T3, which was the final target (the primary downtrend line) was hit a couple of months later essentially around the same level as T2 because SOYB traded in a sideways trading range between T1 & T2 for months after the second target was hit, eventually causing the downtrend line to come in at the former T2 level.

WLT: Hit T2 for a 43% gain back in early November just 3 weeks after entry. The trade continued over half-way towards the third & final target (T3) before reversing & exceeding any reasonable trailing stop (none suggested).

UCO/USO: The UCO (2x long crude)/USO trade exceeded the previously suggested stop of a solid break below the recently highlighted trading range on the 60 minute chart. That recent (current) break below the trading range is also the most recent preferred scenario that was posted a few days ago (a flush-out move below the range before crude begins to move higher) and I will continue to post updated on crude oil/USO but as far as the recent UCO/USO long, it would not be prudent to continue to extend any stops/losses on that trade.