HD is one of the active short trades in which I’ve made the decision to leave active even though it recently exceeded the previously posted suggested stop level by a modest amount (~3%).  Like so many stocks at the top of what could likely prove to be a significant market top, prices are usually stretched to the very limits, if not just beyond the limits of where the bearish patterns are typically “undone” or negated.  For example, textbook rising wedge breakdowns, such as we had recently in HD, will go on to make new highs, often backtesting the broken wedge pattern at levels just beyond the bulk of most short-side stop orders and just at the point to suck in the maximum amount of remaining willing new buyers (which, as the declining volume on HD and so many stocks making new highs over the last few months illustrates, has been shrinking).

Due to the fact that the charts remain bearish on all time frames from the daily out to the monthly chart, where HD can be seen approaching it’s all-time highs set all the way back in late 1999-early 2000, just at the peak of the last secular bull market, I will leave this trade on the Active Trades list for now.  However, due to the relatively strong price action, I would consider stops not too far above the recent highs if entering a new short position here or for those still short from the original short entry on the wedge breakdown in December (around the 63 level).  Daily, weekly & monthly charts below: 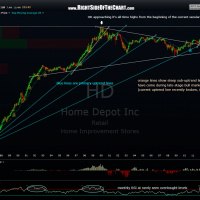 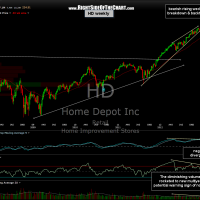 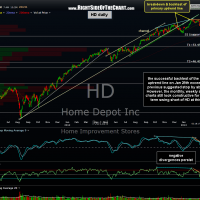