here are the updated daily & weekly charts on CERN.  i have decided to set my stop slightly above the 80 level which is both horizontal resistance, a re-test of the recently broken multi-year uptrend line (only partially shown on this daily chart, see weekly for the entire pattern) as well as my typical M.O. when caught on the wrong side of a gap while short (i often wait until shortly after the open to let the dust settle, then place a stop over the highs).

keep in mind that my trading style is more flexible than many traders, who prefer rigid stops and trading rules.  at times i will trade that way but at other times, like the last few months, i allow for a more flexible trading style.  this strategy can cut both ways: allowing additional room on your stops beyond your original plan can allow loses to mount, sometimes wiping out months of hard-earned gains.  at other times, like the last few months, i have numerous swing short trades that i allowed to go underwater by a considerable amount because i was highly confident the market was in the final stages of at least a temporary top.  almost all those positions that went underwater have either been closed for very nice gains or are currently sitting with embedded gains and still look very promising and so that strategy has so far paid off.

always trade according to your own unique trading style, risk tolerance and market beliefs.  also keep in mind that i list multiple targets on most trades to accommodate both short-term, very active traders as well as longer-term swing traders.  therefore, the suggested stop levels that i post will not align with every price target from an R/R perspective.  in my opinion, one should use at least a 3:1 R/R ratio on a trade (accept no more than $1 risk of loss for every $3+ of expected profit).  my new stop level on CERN of ~$80 would be about a 7 1/2 point loss from the original entry price while my preferred target (T2 at 57.90) would be about a 14.60 point gain, again, from the original entry price.  that’s only a 2:1 R/R but the way i see it is that i was caught on the wrong side of the gap and i have two choices today: cover the short at the open, guaranteeing a 6 point loss or set a stop not far above that level, thereby possibly adding another 2 pts to the loss if stopped out but also possibly (and very likely, IMO) allowing the trade to reverse soon and continue falling to hit T2 over time, thereby booking a 14.60 point gain. 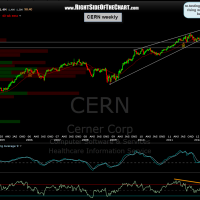 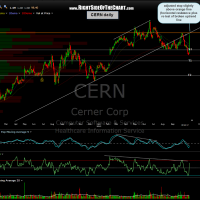