CCE (Coca-Cola European Partners plc) looks to offer an objective long entry for both a Swing Trade as well as a Growth & Income Trade & will be added as an Active Trade in both categories at current levels. 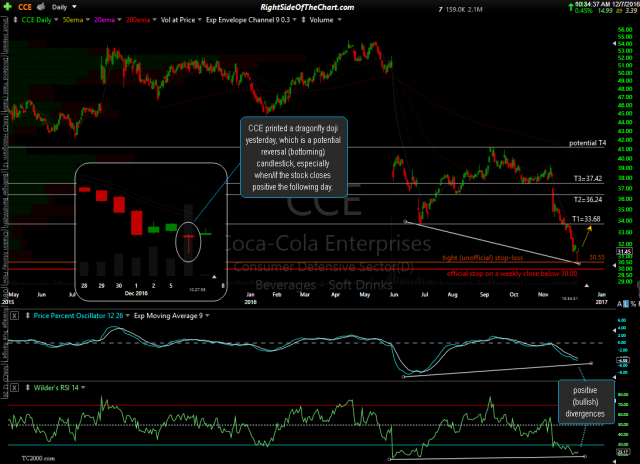 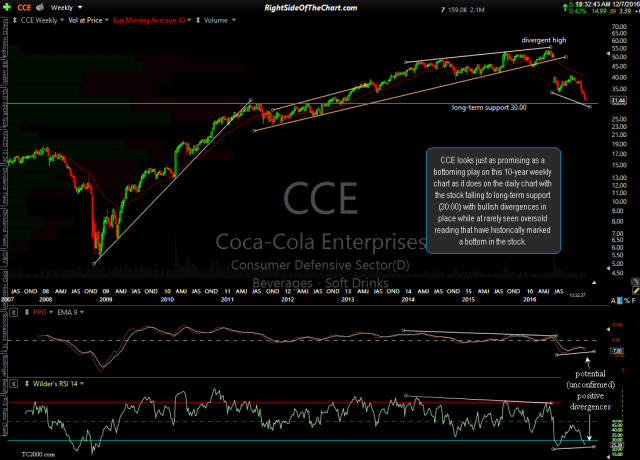 Props to Ruben in the trading room for mentioning this one yesterday. CCE has fallen about 44% over the last 8 months, printing a dragonfly doji yesterday, which is a potential reversal (bottoming) candlestick, especially when/if the stock closes positive the following day which so far appears to be likely. CCE looks just as promising as a bottoming play on this 10-year weekly chart as it does on the daily chart with the stock falling to long-term support (30.00) with bullish divergences in place while at rarely seen oversold reading that have historically marked a bottom in the stock.
With a current dividend yield of 3.39% plus the potential for capital appreciation of anywhere from 7.5% (if T1 is hit) to 20% (T3) and quite possibly more, CCE fits meet the criteria for both a Swing Trade as well as a Growth & Income Trade, for investors looking for income producing investments with above average potential for growth as well.
My initial inclination was to set the suggested stop as any move below yesterday’s low, as that would have wiped out the dragonfly doji candle & foiled that potential bottoming pattern which requires prices to move higher following that candlestick. However, with the choppy, sideways grinding price action in the broad market in recent months, I’ve noticed an unusually sharp increase in stop-raids above & below well placed technical levels. As such, my preference on this trade is to allow for a weekly close (end of day Friday) below the 30.00 long-term support level which is only 55 cents below yesterday’s low.
The current price targets are T1 at 33.68, T2 at 36.24, T3 at 37.42 and a potential 4th target around the 41 area possible to be added, depending on how the charts play out going forward. The suggested beta-adjustment for this trade is 1.0 (i.e.- a typical position size, no adjustment needed).
2020-05-01T20:42:45-04:00Dec 7, 2016 11:03am|Categories: Completed Trades - Long, Growth & Income Trades- Completed, Long-Term Trades- Completed|Tags: CCE|Comments Off on CCE Trade Setup & Entry