These are the charts of some of the largest components in the biotech sector. My reasoning for closing about 60% of my biotech shorts shortly before the close yesterday & closing the remainder shortly after the open today, as well as reversing to a long position, was the fact that the majority of top components in the sector had reached one of my profit targets (most of which were covered in the July 30th Biotech Wreck Pending video) , most with bullish divergences in place on the 60-minute chart. Many of these stocks have also traded on heavy volume as they reached these levels which may be institutional buyers stepping in or merely just other shorts like myself, covering at these key support levels and maybe reversing to play a quick bounce. All horizontal & downtrend lines are resistance levels which could act as potential price targets, should today’s rally in the biotechs prove to be more than just a one-day relief rally. 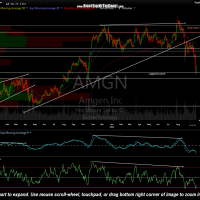 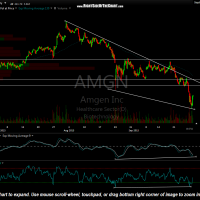 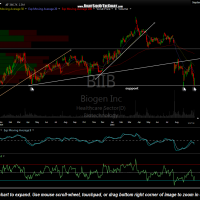 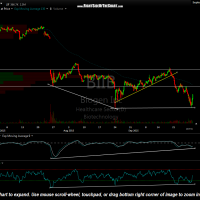 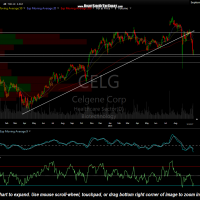 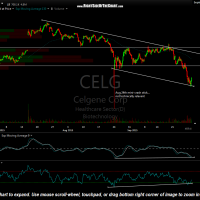 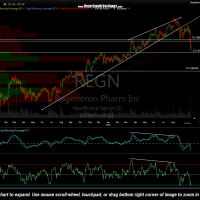 A quick bounce is all that I am likely to do with today’s long in the biotechs. While this bounce could have some legs, I’m still not convinced that the broad market isn’t poised for another major leg down. If that does happen, it would most likely mean that the biotechs would be dragged down, kicking & screaming, with the rest of the market. Hence, I may be out of the bounce trade before some even read this post.

note: these stocks are listed under the Long Trade Setup category as unofficial trades, just as with the LABU & other biotech etfs bounce trade ideas mentioned earlier. That means that these trades will not be moved to the Active Trades category (unless the are made official trade ideas in a follow-up post) and as such, there are not any suggested profit targets or stop-loss levels and they may or may not be followed up on.