BGG (Briggs & Stratton Corp.) was mentioned as an unofficial trade idea* along with GNRC (Generac Holdings Inc.) back on April 29th as potential beneficiaries to the planned rolling blackouts by PG&E as well as other California utility companies. Since then, BGG continued to drift lower within the larger downtrend off the early 2018 highs while GNRC has gone the other way, rallying since then & now approaching the key 60.75ish resistance level defined by the stock’s 2018 & previous 2019 double-top all time highs (4-year chart below along with the 2-yr daily chart of BGG, more on GNRC to come in a follow-up post). 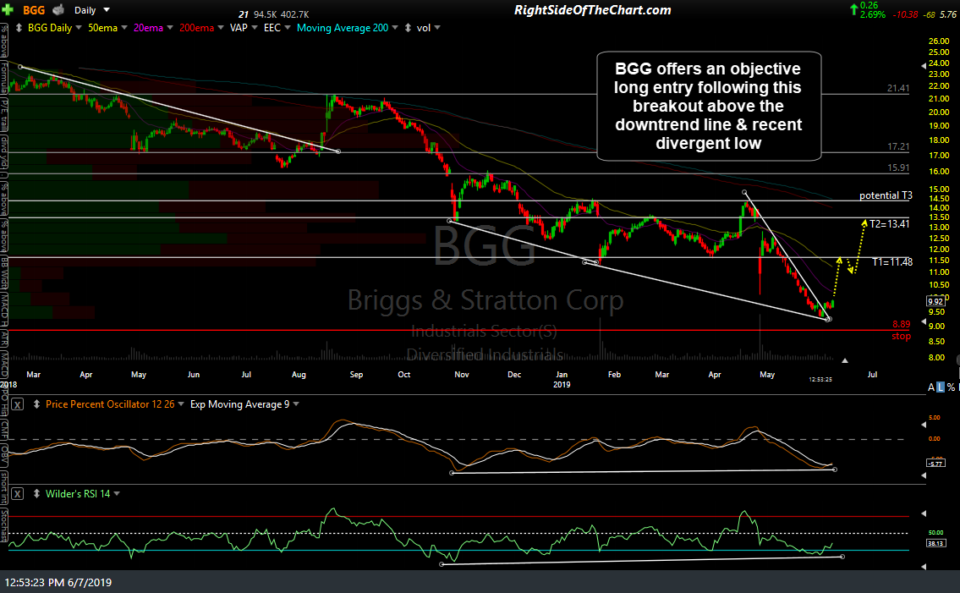 While a fundamental case for these generator makers was laid out in that previous post, there just wasn’t enough technical evidence to add either of those stocks as official trade ideas. However, with BGG just recently breaking out above a well-defined downtrend line following a large divergent low (i.e.- positive or bullish divergences), the stock now appears to offer an objective entry & is on watch as Trade Setup for both a Long Swing Trade as well as a Growth & Income Trade, as BGG pays a current dividend yield of roughly 6%.
While I might normally just go ahead & add BGG as an Active Trade at this time, with the broad market hitting & so far stopping cold at my upper-most bounce target today (SPY 289), I would prefer to see if the market builds on the current rally off Monday’s lows early next week or if it starts to move impulsively lower, which might indicate that the market is poised for another major leg down. As always; official or unofficial, active trade or trade setup, if you like the setup and it aligns with your own analysis, outlook for the market or you are just looking for trade ideas to add to a diversified & balanced portfolio, I have listed what will be the price targets & maximum suggested stop (if targeting T2) on the chart above.
*The definition for the various trade idea categories (Swing Trades, Long-term Trades, Growth & Income Trades and Unofficial Trade Ideas) can be viewed at the top of each of those respective categories which can be accessed in the sub-menus under Trade Ideas on the main menu at the top of the page. For example, the description for an unofficial trade is:

While the description for the Growth & Income Trade ideas is:

Growth & Income Trades are longer-term swing trade or investment candidates expected to generate an above average dividend yield and capital appreciation. Essentially a subcategory of the Long-term Trade Ideas category, the expected holding period on the Growth & Income Trades is typically several months to a over a year or more.

And the description of a Trade Setup is:

Trade Setups are potential swing trade or longer-term investment candidates that are setting up in a well defined chart pattern. Once/if the pattern triggers (i.e.- a break-out or break-down), the trade idea will become an Active Trade until either the price target(s) are hit or the trade is stopped out. However, some Active Trades will also remain in the Trade Setups category after triggering an entry as long as the trade still provides an objective entry. Therefore, many trades on this site will often be assigned to multiple categories.

Trade ideas can be assigned to more than one trade category as this trade, in which case an active swing trader might only target the first price target on BGG, booking profits there (if hit) and moving on to the next trade while a longer-term swing trader, trend trader or longer-term investor, especially someone looking for dividend paying stocks, might consider holding out for the second price target or quite possibly any of the additional potential targets (all marked levels on the daily chart above).
Also, note that both the trade category(ies) and the symbol tag (stock ticker) assigned the trade ideas or any securities that are covered in a front page post on the site are located as hyperlinks just below the post. For example, clicking on the symbol tag, BGG, below this post will load all front page posts (not trading room post, search BGG using the search icon within the trading room) with analysis on BGG.