as i said earlier, i’m going to go thru some of the existing set-ups and active trades today and highlight any that i think are worth watching.  i know that i’ve posted a ton of both long and short trades lately, some were already stopped out as per the suggested stop parameters but without having done an official tally, it seems that the majority of both long and short set-ups posted have either already played out and hit at least their first, if not final, targets or are still active (meaning they haven’t been stopped out but have yet to hit their first target).

keep in mind that even with the market hitting new multi-month, and even some indexes (e.g. NDX) hitting multi-year highs in the last few days, many of the short set-ups have performed very well, a lot even hitting their target(s).  that confirms what i try to impress here which is to that the best technical patterns on stocks or sectors, even if they are against the prevailing trend of the broad market, will usually make you money.  obviously, when your trades are aligned with the trend of the market, they have a higher chance of successfully playing out as evidenced by the sheer number of long set-ups here posted in the last couple of months that have already hit or exceeded their target, many of which were 20, 30 and even 50%+ gainers.  day-traders may want to continue to focus solely on the long-side until the trend has clearly ended but i believe that swing-traders and longer-term traders/investor should either consider reducing long-side exposure here (by gradually booking profits and building some cash reserves to take advantage of any pull-back buying opportunites) or, if adverse to selling due to tax implications or not wanted to be shaken out of a favorite position with a good entry, consider hedging your existing longs with some selective short stocks or maybe sector or index short etfs, for those not comfortable with shorting individual names (which do carry additional risks vs. the diversity of an etf).

with that being said, here’s the update chart of BBBY (with the previous chart posted first).  more to come as i cycle thru the existing trade ideas. 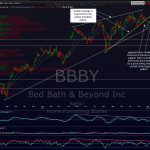 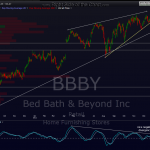