AGNC (American Capital Agency Corp) is one of the mREITs that I had mentioned on Friday that look promising from a longer-term perspective.  As such, AGNC will be added as a Long-term Trade Setup (also under the Growth & Income Trade ideas sub-category) with an entry to be triggered on a break above this 60 minute bullish falling wedge pattern.  AGNC will also be added as a typical swing trade setup under the Long Trade Setups category as this 60 minute chart lists some near-term targets that have a good chance of being hit should price make a sustained break above the pattern.

With a dividend yield of roughly 16% and a potentially bullish longer-term chart, the targets for the Long-Term Trade will be based off the daily & weekly charts with the exact levels to be posted on a live chart asap.  The horizontal lines on this daily chart correspond with some likely long-term price targets but again, the exactly suggested profit target levels will follow later.  Regarding the entry criteria on this trade; shorter-term, more active traders might prefer a buy signal on any intraday breakout above the 60 minute falling wedge pattern while longer-term traders might wait for a 60 minute or even a daily close above the pattern before establishing an entry (in order to reduced the odds of a false breakout).  Stops TBD upon entry. 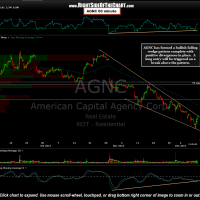 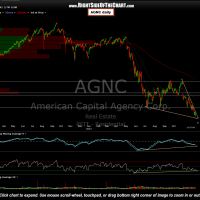