Member @wupengaion requested an update on XBI in the trading room & here are thoughts, along with my daily & weekly charts of XBI.

I don’t have a good read on the very near-term direction of XBI although it did close right around resistance yesterday so I’ll be watching to see if it can build on those gains (near-term bullish) or if it moves lower today (potentially bearish as that would be a rejection on the bounce back to the 86-87ish R level). Next resistance would be a backtest of the recently broken trendline and/or the 92.80ish level. Also, note that the PPO is starting to turn back up right on the yellow line that I’ve had on the PPO for a while now. I use that line as a trend indicator; bullish when the PPO signal line (9-ema/white line) is above it, bearish when below. 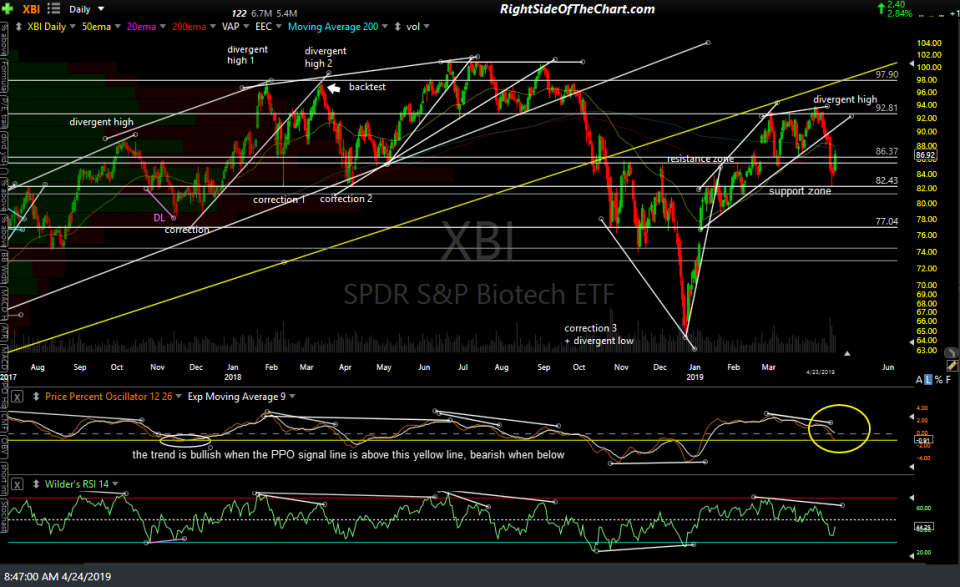 While the near-term outlook for the biotechs is somewhat unclear, zooming out to the weekly charts, the bigger picture still indicates that XBI remains in a bear market, still trading about 15% below its mid-2018 all-time highs after dropping as nearly 37% off that high at the late December lows. Similar to the yellow line on the daily PPO above, the zero line on the weekly PPO (dashed white line) is a very simple but effective trend indicator, bullish when the weekly PPO signal line (9-ema) is above the zero line & bearish when below.

The zero line often acts as support or resistance on my stocks, sectors & indexes, when tested by the signal line from above or below, as it current is with XBI. Also note that the PPO line (blue line) has now turned back down as well, which is bearish as that indicates that the momentum has shifted from bullish (when the PPO line is pointing up/has a positive slope) to bearish (negative slope/pointing lower).

Bottom line, I can make a decent but not super-strong case for another major leg down in the biotechs based on my analysis of the weekly chart but with the near-term direction somewhat unclear on the daily chart coupled with the fact that the uptrend in broad market has been extremely resilient and we don’t have anything remotely close to a sell signal on the broad market at this time, I’m giving the benefit of the doubt to the prevailing trend & holding off on adding XBI as an official trade for now but ready to pull the trigger if/when things change.